Here is a photo of the USS Princess Royal, taken from this Wikipedia entry. Strangely enough, it doesn't mention that after it was renamed the General Sherman and turned into a merchant ship, it was sunk on the Taedonggang, the river that flows through Pyongyang, in 1866 (as the entry on that incident relates). Worth remembering, of course, is that North Korean historians claim an ancestor of Kim Il-sung was the leader of those burned the ship. 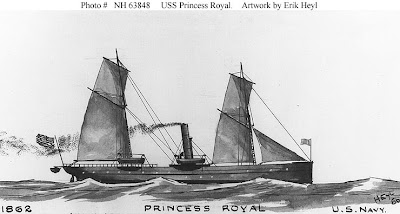 Here is the beer cap from a bottle of Taedonggang beer, made in North Korea. Notice any similarities? 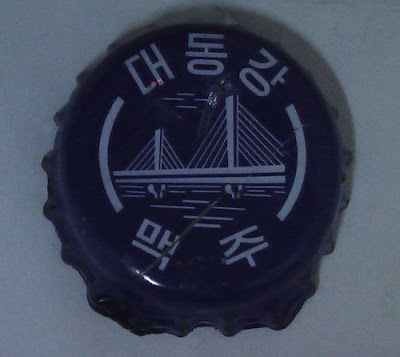 The General Sherman is literally on the Taedonggang. Subtle, yet it gets the point across. Does Taedonggang have the honor of being the world's only anti-American beer? Besides Molson Canadian, I mean?

I was reminded of the beer cap after reading this post at DPRK Studies about Taedonggang beer, which mentions that it's no longer available in South Korea. It's possible that the beer made for export (in a 500 ml bottle at 5%) was better than the domestic stuff. I drank the beer made for export two or three times, but also drank a bottle of the domestic stuff a friend brought back from Kaesong (which comes in a 650 ml bottle at 4%, and is seen in the brewery photos at DPRK Studies) and the latter did not compare favorably with the former.
Posted by matt at 11:45 PM

Are you sure that's not a bridge?

Molson used to be Canadian, then they got bought by some American beer company. They dropped the I'm Joe and I am Canadian ads right away.

Thanks for the link Gord, I hadn't seen that! I was wondering why I would suddenly have three comments on a week-old post.

As for a bridge, I used Google Earth to look at bridges along the Taedong River and found only one that could pass for what was on the cap, but it's towers were the same size (of course). A comment at the Salon article links to a picture of half of the bridge and prompted me to look again. Then I saw these stamps that I realized it might be foreshortened, and that's why one tower would look smaller. With the difference in the height of the towers, and the fact the piers aren't rendered in a way that would suggest piers, it didn't seem like a bridge to me. But it seems likely it is. D'oh!

:) No problem. I posted about this post too, but only after seeing it linked at Salon. I've fallen behind on all blogs and have no hope of catching up. Gah!

No longer available in South Korea!! Damn that Lee Myung-bak (I'm blaming him whoever is responsible). That was some tasty beer...