The subway map of the future

Here's a Seoul subway map I found in a day planner I received as a gift: 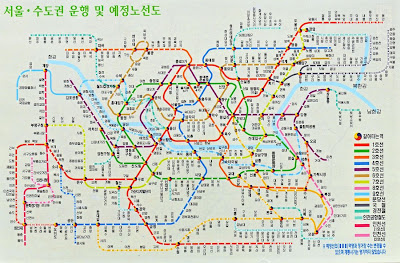 Needless to say, the subway system displayed on that map is not the one that exists today. Some of the changes I was already aware of: the new Line 9, the completed Incheon Airport line, the new Bundang Line, the Line 3, Line 7, and old Bundang line extensions, 2 new Incheon Lines, a light railway going north from the Line 2 spur at Sinseol-dong, etc. Many of these are described in this video. But there are a few there I know nothing about, such as an extension south from Sosa station in Bucheon, and other spur lines. The interesting thing is that there are several planned lines missing from that map, but I'll look at those more closely in another post.
Posted by matt at 5:06 PM

Side note: At first the English script seemed perfect. Then the awkward phrases started creeping in: "west of Seoul" instead of "western Seoul", and others.

Great blog. I found while I was searching for some articles on Hanbando Daewoonha in English.

surprise blog, i learned a lot of things through this blog, amazing.

No plans to build a line to Kimpo City then? Somewhat strange considering the plans for a new town there.