I was looking for something unrelated (as always) when I found some information about the opening of Seoul's subway line 5. A November 15, 1995 Korea Times article tells us that

The 15km Kangdong section of Seoul Subway Line No. 5 linking Wangsimni in central Seoul to Sangil-dong in the southeast will open today five and a half years after construction began.The new line will make Seoul's subway network 148km long. The section will have 14 stations and passengers will be able to switch to Subway Line 2 or the Korean National Railway at Wangsimni Station.

The section has cost 912.9 billion won, according to Seoul city officials. [..] Construction of other parts of the Line No. 5 connecting Panghwa and Sangil-dong will be completed around the end of the year, providing access to Kimpo International Airport.

Interesting that it was opened in sections, each one connected to a transfer station. To remind you of how long ago this was, some cutting-edge technology is also mentioned:

In particular, pager users will suffer no inconvenience underground because the section is equipped with complicated communication devices enabling the operation of beepers.

To go along with this, a July 20, 1996 article titled "Mobile Phone Use Possible on Subways This Fall" reminds of the old days before everyone was chatting, playing games, or watching TV on their phones:

The Seoul Metropolitan Rapid Transit Corporation said digital mobile phone services will be available in underground stations and trains for the partly-opened subway line 5 as well as 7 and 8, due to go into service sometime this fall.[...] Thus far, it has been possible only when the train was moving above ground or in subway stations that weren't so deep underground. [...] It was easy to install the mobile communications systems and antenna cables necessary while the new subway lines and stations were being constructed, explained an official of the rapid transit corporation.

A part of Subway Line No. 5 linking Kimpo International Airport opened early this morning, five years and nine months after construction began. The new subway line is linked to existing lines Nos. 1 and 2 at Sindorim station, thus allowing commuters from the airport and beyond to reach downtown Seoul in just 45 to 50 minutes.

A[...] foreseeable problem might be the transfer at Sindorim station, which is already conjested during rush hours as lines 1 and 2 converge there. According to the Seoul Metropolitan Subway Corporation, at least 40,000 more people are expected to join in the mass exodus of early morning and late evening commuters at the station every day.

I couldn't help but think, "Hold on - Line 5 doesn't pass through Sindorim at all." It took a moment before I realized that the Line 2 spur line (pictured above) from Sindorim to Kkachisan, the existence of which never made sense to me, was originally part of an early phase of Line 5. 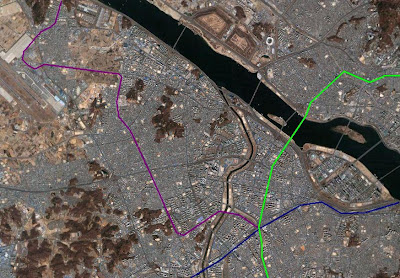 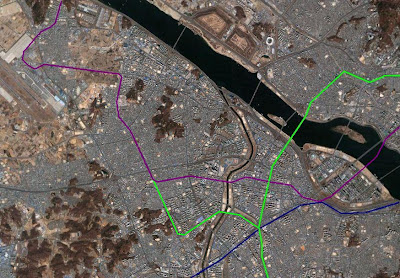 Lines 1,2, and 5 in southwestern Seoul today
The article continues:

However, when construction for the remainder of Subway 5 is completed in November, Kimpo International Airport will be linked directly to Kwanghwamun in downtown Seoul. Hence, the inconvenience of transferring at Sindorim will be eliminated, and travel time will be cut in half to about 20 to 25 minutes.

Yes, I suppose if you started at Gimpo Airport and skipped every stop along the way, you'd probably get to Gwanghwamun in 20-25 minutes. Otherwise, it takes around 40 minutes. Speaking of skipping stations, Line 5 has always skipped Magok Station, which is 2 stops before Gimpo airport and is in the middle of a field (which is soon to be developed). Photos of its construction can be found here. Here's what its single entrance looks like today:

You can go down the steps and peer through the shuttered entrance:

What's interesting is that, as it hasn't been used in the 11 years since it was completed, the sign above uses the old romanization (like these Korea Times articles) and reads 'Panghwa' with a 'p'. A maintainance worker I used to teach said he had to come here every night to check on the station, and that two people had killed themselves there (presumably by walking through the tunnel to get there. He said it's a bit spooky at night.

In trying to find the Magok Station construction photos above, I found a set of photos taken between January and October 1996 showing the area around Balsan Station and Ujangsan, Magok-dong, Banghwa-dong, Gungsan, and Hwagok-dong (starting here, go left at the bottom).
Needless to say, I was fascinated by them. Here are a few: 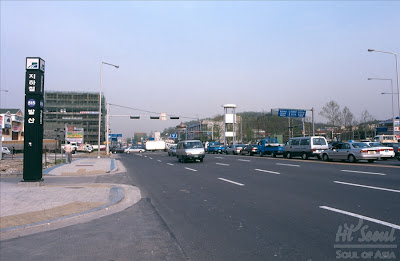 Above is Balsan Station on Gonghangno looking east. If you look below you can see where the photo above was taken (in the center looking towards bottom right). You can also see Magok-dong (the fields) Banghwa-dong at top center and Gimpo Airport at far left. Note also the subway exits opening next to the fields; the path of the subway line can be seen arching across the fields. This view is almost the same today; despite being approved for development in 1996, Magok still has yet to be developed, though plans are in the works. 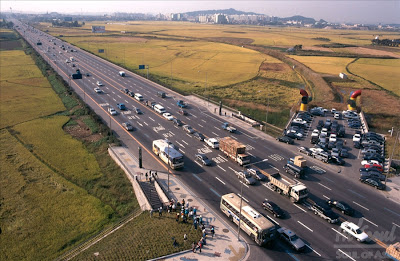 If you continued towards bottom right, you would travel through the next two photos, which show the area around Balsan Station (especially Deungchon-dong) being constructed. Along the top are apartment buildings which would have been built around 1993 or 1994 (and thus were quite new in 1996). This area, much like the northern part of Banghwa-dong, were built as a 'city development' over farmland in the early 1990s. These developments in such 'rural' areas were closely related to the planned subway route. 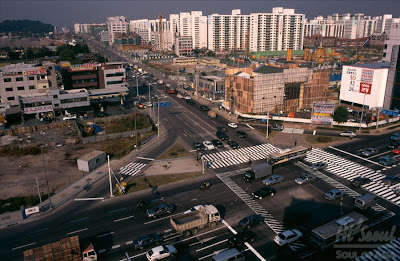 Continuing along, the street below (Gonghangno, heading east) is today the middle class family restaurant playground of Gangseo-gu, though in 1996 it still had a ways to go. 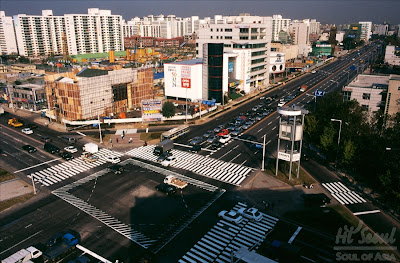 In the photo above, if you were to stand on the building in the center and look to the right, these much older apartments would be seen, along with Hwagok-dong and Ujangsan in the distance. 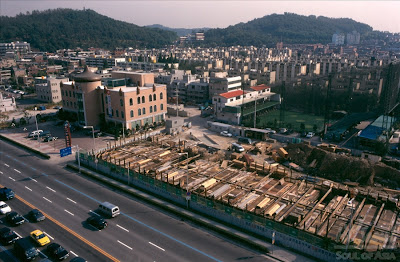 The same apartments as viewed from Ujangsan, with Banghwa-dong in the distance: 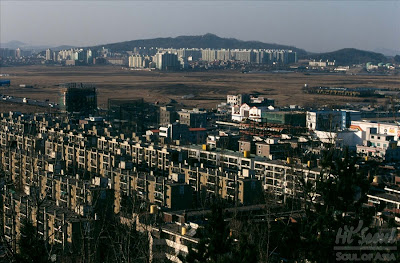 Banghwa-dong looks quite a bit different today, and due to the apartments in the foreground having been replaced with towering apartment blocks two years ago, this view is likely no longer available from the mountain.

At any rate, on December 31, 1996, Line 5 from Kkachisan to Wangshimni was opened, linking downtown Seoul to Gimpo Airport.

The 14.1-kilometer downtown section of Seoul Subway No. 5 opened yesterday, directly linking Kwanghwamun and Kimpo International Airport by spanning the Han River through underwater tunnel.The downtown section opening means the completion of the full 52.21- km No. 5 Line from Panghwa near Kimpo to Sangil-dong via Yoido and Wangsimni.

With the opening of the subway's downtown section, work will begin tonight to dismantle Tangsan Railroad Bridge that spans western Han River on the Subway Green Line, a loop that serves thousands of commuters in Seoul every day, following an inspection that found it unsafe. Once the work is underway, the subway line will not operate its entire course, halting its service at Hapjong Station north of the Han River and at Tangsan Station south of it. With the trans-river subway operation out of service, an estimated 300,000 commuters who use the facility every day will be penalized and sent scrambling for alternative means of transportation.

They had to scramble for almost two years. The new Dangsan Bridge wasn't opened for use until November 22, 1999.
Posted by matt at 3:05 AM

an estimated 300,000 commuters who use the facility every day will be penalized and sent scrambling for alternative means of transportation
Oh, the memories of having to take the shuttle bus between Hapjong and Tangsan on my way from Sillim-dong to Sinchon - unless I took the "seat bus." At the time I was so young that Sinchon was the place to go with my acquaintances...

Damn, I had forgotten about that Dangsan-Hapjeong bus. That was really terrible. Guaranteed way to get extra sweaty in the Seoul summer.

Actually, I remember the No. 5 line before it was finished, too. Gimpo Airport in general was enough of a shock for a newbie, fresh off the airplane. Then, after finding my way to the subway, discovering that I had to get out and transfer or take a bus... it was waaaay too confusing for my little foreign brain back then.

Thanks for bringing back some memories I had managed to repress. T-T

Heh - didn't know if anyone would find this interesting beyond myself - nice to see I'm helping dislodge long repressed memories...

Speaking of which, now that I think about it, Line 5 was the first subway I ever took in Korea, as I arrived a month or so before Incheon Airport opened. My friend didn't realize Bucheon was a 10 minute cab ride south so we rode the subway for over an hour to get there (out to Singil and back to Bucheon). On the subway I noticed a trickle of cola flowing out of the bottom of my knapsack (from the neat-o slim can I got on the plane but wasn't thirsty enough to drink at the time). Had I been in a cab, perhaps I wouldn't have noticed it so soon and the books in the knapsack would have gotten even more cola-soaked than they did.

Matt, so much of our lives in Seoul is or has had to do with the subway that it's easy to have us become sentimental. I'm just thinking of the sentiments I got when I took the line 2 one year ago after several years' absence from Korea. Airports are almost empty of any feelings, but taking the subway means coming to Seoul and Korea. It's really a magnificently significant cultural phenomenon, the Seoul subway.

I often like to make sense of the changes that have taken place in Seoul since I first went there by thinking that there were only four lines back in 1994.

Antti - good point about the subway - for most of us car-less foreigners, it does define the way in which we traverse the city. One of the things I liked about living in Bucheon was that line one was above ground, and gave you a sense of the city around you (and something to do when you couldn't sit down, which was usually). I'm sure the same is true for the southwestern stretch of line two.

Regarding there only being four lines, a few years ago I was on line one and saw an advertisement above the door, but it was only half an advertisement. The other half was what lay behind it - an old subway map with only 4 lines on it (and line three wasn't entirely finished either).It was an interesting piece of 'archeology'. Peel away the posters and ads and who knows what you might find?

I just received a day planner from a student which has many (not all) of the future planned subway lines on the included subway map - it's pretty interesting - I'll post it when I have a chance.

I recall how during the brief time period after the Tangsan Bridge weakness was identified but before the shuttle buses were set up, the trains would creep over the bridge at about 10 mph.

I and many of my colleagues at my first place of employment learned to read Hangeul by making sound-letter correspondences between Korean and English on the bilingual subway stop signs.