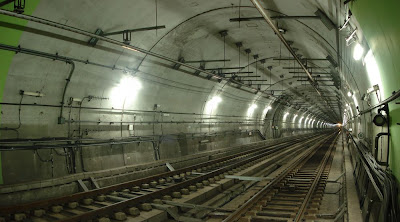 The four went on the rampage in the subway station in May and beat Cho who tried to stop them, causing him injuries requiring three weeks of treatment, the prosecution claimed.

On May 19, 1995, a group of American soldiers got into a fight with a group of Koreans on a subway in downtown Seoul (either line 3 or 4), which led to an outpouring of anti-Americanism in Korea which focussed on calls to revise the Status Of Forces Agreement regarding how U.S. soldiers are treated in the court system in Korea. I first read about this incident here.

This New York Times article is the earliest article I could find about the incident. It was written before the trial and describes the what happened from the soldier's point of view, which is ever-so-slightly different from the Korean media and prosecutor's point of view. Here are the more important parts:

It all began when an American soldier put his hand on a Korean woman's rump.

The version that has captured the local imagination is that a group of drunken American soldiers were rampaging through the subway, molesting Korean women, and that the soldiers then attacked good citizens who dared protest the errant hand.

The American understanding of events starts with a fact that the Koreans tend to leave out: The American soldier and the Korean woman whose behind he patted were in fact a married couple.

In any case, the result that evening in May was a huge brawl in the subway. It has reverberated through the country and underscored the delicacy of the mission of the 37,000 American military personnel in bases in South Korea.

[American Ambassador James T.] Laney says the problem is not that American soldiers are committing more crimes, but that an irresponsible Korean press is portraying them in a particularly lurid way to an inflamed public.

While cases like the subway incident are seen by Koreans as evidence of the need for protection from rampaging Americans, to Americans they show that they need protection from a skewed local judicial system. After the subway brawl, no Koreans were indicted, but four Americans were.

Here are three contemporary articles from the Korea Times:

Two United States Forces Korea servicemen indicted on suspicion of assaulting a Korean man in a Seoul subway station during a brawl in May, yesterday flatly denied they beat him during the first session of a trial for the "subway incident" which stirred up anti-American sentiment among Korean people. Serg. [] and the other defendant said that they did not beat Koreans and rather they were beaten by Koreans while trying to stop them assaulting [the sgt.]'s Korean wife, [], at the Chungmuro Station on May 19.

The trial is being held at the Seoul District Court, and is presided over by Judge Kim Tong-hwan. The American soldiers were prosecuted without physical detention on charges of violating the Law on the Punishment of Violent Acts.

They allegedly ganged up to beat Cho Chong-guk, 28, who was trying to stop them from creating a disturbance at the subway station late at night. Cho suffered an injury requiring three weeks of medical treatment. He later staged a two-day hunger strike in front of the U.S. compound in Yongsan, demanding the punishment of the U.S. servicemen involved. Meanwhile, the court fined [another] Corporal and [the sgt.'s wife] 1 million won and 500,000 won for their involvement in the violence, the penalty sought by prosecutors, in a summary judgement.

Poor 28 year-old Cho Chong-guk, who was left so incapacitated that three weeks of medical treatment were necessary ('You mean my health insurance covers this?!'). It's nice to see that the true victim - a woman who was spit and slapped on - was given a 500,000 won fine, while the men who spit on and slapped her weren't even indicted. Considering how, in this case, it was said that Korean witnesses' testimony are given more weight than foreigners, why would the Korean victim be punished? 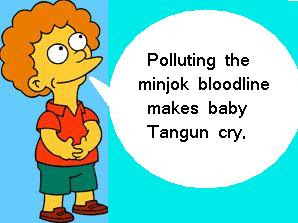 I guess when you match a Korean woman's testimony (especially one who was married to a - gasp - foreigner) against a Korean man's testimony, the woman was more likely to lose. Of course that was back in 1995, and I'm sure such discrimination (against Korean women or foreigners) does not occur today.

One of the four off-duty U.S. servicemen and a dependent involved in the alleged beating of a Korean in a subway station in Seoul in May was found guilty as charged and given a six-month jail term yesterday. Judge Kim Tong-hwan of the Seoul District Court sentenced Sgt. [], 31, to six months in jail for violating the Law on Punishment of Violent Acts. Prosecutors had demanded one year behind bars. [The Sgt.] is entitled to an automatic appeal and he will not have to start to serve the sentence until the legal process reaches its end in accordance with the Korea-U.S. Status of Forces Agreement (SOFA).

Cpls. [] and [], and [the Sgt.]'s wife[], three others involved in the case, were slapped with fines of 500,000 won, 1 million won and 500,000 won respectively as the prosecution demanded. In the ruling, Judge Kim said, "A jail term was given to the accused [] because it was proven beyond reasonable doubt that he beat Cho Chong-guk, 28 in Chungmuro Subway Station in Seoul as charged." "[The accused] has shown no signs of remorse but rather argued that he was the victim in this incident, which made it impossible to settle the case with Cho out of court," he said.

The four went on the rampage in the subway station in May and beat Cho who tried to stop them, causing him injuries requiring three weeks of treatment, the prosecution claimed. They were indicted without physical detention on May 19.

It's good to see that the prosecution put so much work into figuring out who was truly responsible.

Two United States servicemen involved in a brawl in the Seoul subway last May were given fines yesterday, instead of prison terms, in an appeal to the Seoul District Court. [Sgt.], 32, who had been given a six-month prison term by a lower court, was fined 1.5 million won (some 1,900 dollars), and [], 24, was fined 500,000 won (some 610 dollars) for their violent acts in the subway.

The subway brawl a year ago fueled strong anti-U.S. feelings here and led to a campaign to revise the Status of Forces Agreement Korea has with United States Forces Korea.

Giving the lighter punishment, the bench said, "The court clearly finds the defendants guilty of violent acts, but has decided not to hand down prison terms because of concern over the negative effects these would have on their service careers."

How thoughtful of the Seoul District Court.
Posted by matt at 2:24 AM

"Three weeks of treatment" on the jindan-seo means a slight bruise, or an achy finger, where the bruise or ache would have completely gone away after three weeks. It doesn't mean someone was laid up in the hospital for that long.

Which makes the hubbub over the 1995 subway incident all the more outrageous.

Metro is a serial embellisher who is probably exaggerating, mistranslating, or selectively rephrasing what the police officer said. But here is Korea, where stupid xenophobic stuff happens, so who knows?

But even if he got it exactly right, the case can easily be made that that police officer's statement is in no way official or unofficial practice. It's unhelpful and misleading to make out that it's some sort of universal policy here. There are plenty of real-world examples where a foreigner's testimony was treated with the same weight as a Korean citizen's. I've been involved in several myself, where the Korean ended up getting fined or jailed.

But what happened in 1995 was some messed-up shit.

On what basis do you make this claim? Simply by virtue of you not wanting to believe what I said? In the absence of any grounds to even make this claim, because your ass wasn't in the station with me, I'd invite you to a tall glass of STFU.

I hope you speak Korean, since the officer said, upon me asking why Nicole's testimony wouldn't be taken and this direct question, "그럼 외국인이면 증언해도 아무 의미 없어요?" He apologized before saying yes, but that I would probably be OK because I had a Korean on my side. When I irritatedly noted that this wasn't fair, and that it shouldn't matter, he said something to the effect of "여기 미국아니잖아요" and how Korea's legal system wasn't quite as developed and was being very apologetic about the whole thing.

Point is, no matter how much you think I "mistranslated" or "selectively rephrased" words, or "exaggerated", the ensuing 5-minute conversation after my inquiry was basically him explaining/apologizing for the fact that NO, a foriegner's testimony was simply not going to be given weight in this case.

So, I'd like to know, from your extensive experience, or examples from my site, or on the basis of anything, how you can claim me to be a "serial exaggerator" based on anything other than the fact you don't like hearing what I have to say.

In fact, this very case is one I've been howling about for years now, but many ignorant asses such as you have been accusing me of "exaggerating" this case or others like it, such as the Shinchon stabbing incident, or the case of the Army doctor killed on the street in 2000, I believe, or the Army officer stabbed by 3 Korean assailants in late 2002.

Please tell me – what the sam fuck I would have to "exaggerate" against a backdrop of horrible incidents such as these? Or the several incidents I have myself witnessed in which foreigners were treated as the criminals from the moment police arrived? Or several friends who were victims or direct victims of assault on the streets just this year, one of whom called the police after watching a woman being beaten by an ajussi, did the right and moral thing of reporting it and following him, then was nearly arrested when the police arrived, since they assumed HE had been the culprit?

Seriously – and I even have audio tape to corroborate how drunk the man was, how belligerent he was, how smashed out of his gourd he was, yet surely, I "must have done something" to provoke him, right?

Given the fact I have witnesses, police officers who were untypically sympathetic to me because I spoke Korean, because the ajussi in question was so belligerent and drunk, because the wait staff could corroborate everything about the story except actually having been outside, or the fact that had I hit him, any number of Koreans would have surely volunteered to show that "justice" was served against the nasty foreigner - what do YOU have to present to show I'm exaggerating?

Rephrasing? Were you there? What aspect of my account sounds unreasonable or unlikely, then?

And if you think 1995 was "messed up shit" and there are similar examples from then until now, as well as ample personal and anecdotal evidence in line with this pattern of treatment, why is a simply story of someone being falsely accused by a drunk dick suddenly reminiscent of some wild exaggeration or tall tale?

Basically, Coach Taylor, you're just talking out the side of your neck. An ignorant, argumentative, and rude asshole.

And since I don't like being called a liar, I won't pull my punches in expressing my intense disdain for you. And I'll tell you to your face if you'd like.

As one of the people mentioned, I would consider it a great favor if you removed this from your site. You all to easily forget that when making approaches to prospective employers, names can mean so much. Since it was a bogus arrest to begin with, I would be grateful if you removed all of our names and let it lie in the past where it belongs.