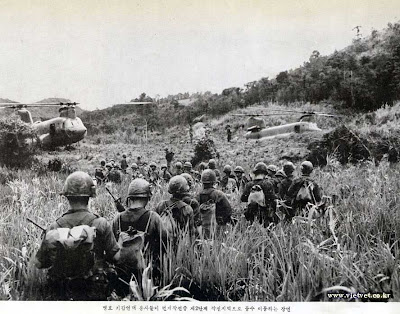 Airlift of Maeng Ho Cavalry Regiment
I've been looking through the Time Magazine archives about Korea in the 1970s and found a few articles about Korean troops in Vietnam. The photos are from this website, which can be read in Korean or English.

The first article, from July 22, 1966, is about the other foreign troops in Vietnam, and is titled 'Other Guns'.

One recent night, South Korean 1st Lieut. Lee Young Woong looked into a peasant cottage as a woman and her two children were eating their evening rice. He noticed at once what a Westerner might easily have missed: there was too much rice for three people. Company was expected, he concluded. Lee and his squad of ten Koreans rounded up the villagers and placed them under guard in three houses. Then his men moved out to set up an ambush. Two hours later, three Viet Cong came to dinner—and died of lead poisoning.

That incident was one of 8,400 ambushes laid by the Koreans of the Tiger Division since they arrived in Viet Nam last November. Assigned to guard the port of Qui Nhon and open long stretches of Highway 1 and Highway 19, the Tigers have accomplished in eight months what eluded the French and Vietnamese for 20 years: securing the lush and prosperous coastal plain of Binh Dinh province. [...]

Once, when the mutilated body of a Korean soldier was found in a Viet Cong-sympathizing village, the Koreans tracked down a Viet Cong, skinned him and hung him up in the village. Not surprisingly, captured Viet Cong orders now stipulate that contact with the Koreans is to be avoided at all costs—unless a Viet Cong victory is 100% certain.

Interesting to see that story in print in Time Magazine - it's one I've heard a few times (the story of the paratrooper in Kwangju in May 1980 who waved his bayonet at students and told them he had cut off numerous female Vietcong soldiers' breasts may not be so far-fetched). Winning hearts and minds (as well as the harsh punishments handed down to offending Korean soldiers) are also described:

South Vietnamese peasants see another side of the Koreans. When refugees come back to a Korean-cleared village, they are likely to find their houses cleaned and repaired, the grass cut, the area sprayed with insecticide. Koreans scrupulously and sensitively follow Oriental custom in their dealings with village elders and the populace as a whole. Two Korean soldiers who raped a Vietnamese woman were summarily shot in front of their company. 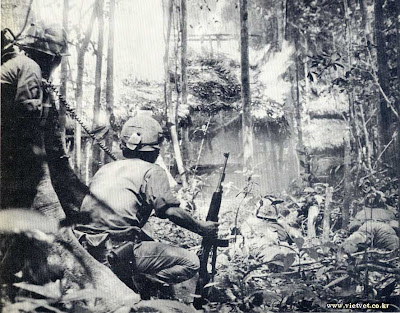 Tiger division troops on search and pacification mission.
Another article from six years later, dated September 18, 1972, is titled 'Another My Lai?' :

Since they arrived in South Viet Nam seven years ago, South Korean troops have gained a reputation as the toughest and meanest of the allied forces.

According to the article, it seems that "scrupulously and sensitively follow[ing] Oriental custom in their dealings with village elders and the populace" hadn't helped relations between the Korean troops and the Vietnamese:

As with other foreign troops, particularly the Americans, the Koreans' lack of understanding of local customs has contributed to suspicious and mistrustful relations with the Vietnamese. Rumors abound of incidents in which Korean soldiers brutalized the civilians —for example, by wiping out entire hamlets in retaliation for losing a single soldier to a Viet Cong sniper. .

Last week new charges of Korean atrocities were reviewed. A Lower House Deputy, Nguyen Cong Hoang, one of the representatives of Phu Yen province, had prompted an official investigation several weeks ago into a My Lai-type massacre that reportedly occurred in his province on July 31. On that day, troops of the First Battalion of the "Tiger" Division's 26th Regiment were conducting a mopping-up operation. As the troops passed near Phu Long hamlet, they were fired upon by small arms. A platoon leader and a sergeant were killed. The Koreans dug in and, with the approval of the district chief, called for artillery and gunship support. When most of the houses in the hamlet had been demolished, the troops entered and "secured" the area. Among the dead: 21 civilians.

[...] The Koreans say that the civilians were killed in the artillery fire. But the villagers contend that they survived the battle by hiding in bunkers. After it was over, they say, Korean soldiers came into the village and murdered the 21 people. Tom Fox of TIME'S Saigon bureau visited the province last week. [...]

"The soldiers called Ba Truoc to come out of her hut," a twelve-year-old girl told Fox. "She came out slowly with her baby in her arms. She stood in front of the hut, and they shot them dead." Then a woman told how six Korean soldiers took the prettiest girl in the hamlet, 16-year-old Nguyen Thi Sang, and forced her behind a small hut, where they raped her as she screamed. Then they shot and killed her.[...]

Hamlet officials are reluctant to take sides. But at least one member of the Phu Yen province council privately supports the villagers' charges. "The Koreans overreacted. They got mad, moved in and went after the people," he said. "It's understandable and regrettable. But what does one say?"

An eventual report "acknowledges the deaths of the civilians but finds insufficient evidence that they were executed." Nothing is said about the rape accusation, or whether soldiers were executed. More tales of massacres by Korean troops are related here. A documentary about the killings of civilians by Korean troops in Vietnam, called "Mad Minutes" (Michin Sigan), interviews numerous people who witnessed family members killed when their villages were 'swept clean'. This review can be found here:

A guilt trip (literally) into Korea's involvement in the Vietnam War. But this time the filmmakers show what the people on the other side of the fence think. A lot of villagers involved in the war, specifically those who came into contact with Korean soldiers, recall their experiences, the people they lost because of the War, and their feelings towards Koreans. Intercut with those accounts, the confessions of a few Korean soldiers, and their reflection on the consequences their intervention in Vietnam caused, both to the local people, and to themselves. Some of the interviewees were clearly picked to elicit maximum effect, and perhaps interviewing a few more soldiers from Vietnam, giving their version of the story, would have helped. Still, the documentary is expertly made and tremendously fascinating, exploring many of the villages and locations where the War took place, and how they've transformed since.

There was also a musical about Koreans' experiences in Vietnam released five years ago called Blue Saigon, which is looked at here.

It's also well known that Korea received a great deal of money from the US for taking part in the war, but it also got money for other reasons, as the essay "The Korean Construction Industry as an Exporter of Services", which can be read on page 225 of this pdf (or text file) tells us:

The dispatch of Korean troops to South Vietnam in 1965 and 1966 presented an opportunity for Korean construction firms to participate in military construction projects abroad. South Vietnam marked the first case in which Korean workers and companies went abroad in large numbers and earned substantial amounts of money. This experience familiarized Korean workers with the opportunities for earning much higher wages abroad than they could in Korea. The South Vietnam boom for Korean firms subsided completely by 1972

Another aspect of this experience worth remembering is that Chun Doo-hwan and Roh Tae-woo served in Vietnam. Lee Jae-ui, in the book The Kwangju Uprising: Eyewitness Press Accounts of Korea's Tiananmen, certainly makes the connection. Speaking of the soldiers who had returned from Vietnam and spent "not just months but years biding their time in South Korean army camps on low pay", he wrote

They were informed that deadly enemies had taken up position in Kwangju, a city riddled with North Korean spies. They had to go in and clean up the place, just as if they were on one of those hamlet missions in South Vietnam where there were supposed to be no survivors.

Of course, it would be useful to know just how many of the paratroopers had been in Vietnam, seeing as Korea's participation there ended in 1973 - seven years before the Kwangju Uprising. That many of the officers had experience there wouldn't surprise me. I don't think focussing on the Vietnam - Kwangju comparison would be very fruitful, considering all of the other factors involved, but then to be fair to Lee he also lists it as one influence among many.

It's interesting that as Korea's allies criticize it for dealing with terrorists (ie giving the Taliban $20 million to help send more American, British, Canadian, and other foreign troops home in coffins - I don't remember the hostages apologizing to those countries), those wondering whether Korea's military could have mounted a rescue operation found that it would be unable to. This paints quite a different picture than the stories of Korea's military quoted above, though it's worth pointing out that a military that could skin its enemies flourished under an authoritarian government; it's interesting to note that Mark thinks that Korea lost the 'will to kick ass' after the Kwangju Uprising, which highlights yet another way in which the uprising has affected Korean society.
Posted by matt at 2:13 AM

The fact at the end is an important one. The countries that fought for Korea's independence are now finding the fight in Afghanistan harder due to Korea giving the taliban 20 million dollars. Every Korean should be ashamed of that and demand more from their joke of a government. Korea always gets angry when they are pushed to change, but the fact that they can't keep their country as one and problems around the world that are due to Korea not being able to run their country properly shows that they need to change the way they think and accept that the Korean way is too backward and ineffective.

I am skeptical of the Fonda-esque comments about massacres. Especially given the "he said - she said" context.

I am a Marine who was attached to three ROK Marine infantry companies and their recon platoon during 1967 and 1968. Such behavior would be out of character for Korean warriors, in my experience. They were fierce warriors, no doubt, but I never witnessed the murder of innocent people, nor have my unit members mentioned this at our reunions, to my knowledge.

I suspect the origin of such rumors is from the draft dodgers sup supported the communists and wanted me to be killed (like Jane Fonda).

The almost knee-jerk accusations repeatedly aimed at anti-war activists during the American War in Vietnam always follow the discussion of atrocities and violence against unarmed civlians. Many of these incidents have been documented and confirmed over time. According to all the history of ROK military in VN, they were killers. Period. Because one did not witness such atrocities first-hand does not mean they didn't happen. There is far too much photographic and eyewitness evidence to continue this 50 years of denial.