Update, September 6, 2020:
I've updated some of the links below using the wayback machine. As well, here is a translation of "Five Bandits" by Brother Anthony.
Original Post: 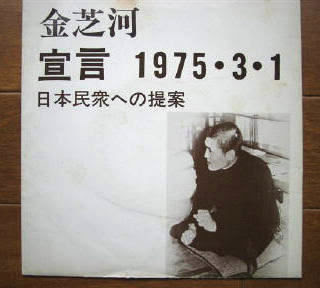 I stumbled upon this article while looking for information about poet Kim Chi-ha. It's a newsletter by Libero International, a Japanese anarchist group, published in 1975, which looks at the political situation in Korea, as Park Chung-hee passed numerous 'emergency measures' and arrested scores of students, church activists, and opposition leaders, as well as artists like poet Kim Chi-ha. It contains a useful 'Chronology of Despotism', a review of post WWII Korean anarchism, the struggle of Donga-Ilbo reporters for free speech, Kim Chi-ha’s lengthy "Statement of Conscience" written "with prison floor dirt on toilet paper, using a filed-down toothbrush", and a look at an autonomous movement among farmers. Interesting stuff. The photo above is not from this publication, but from an article about Tokyo University professor Wada Haruki efforts to publicize Kim's plight. For more on poet Kim Chi-ha, translations of his poems can be found here and here. Unfortunately, I can find no translation of his well known "Five Bandits" online (it can be found in Korean here), though it is described briefly here.

[Kim] gained great popularity among the people when this poem appeared in a monthly magazine, The Sasangge (Korean for The World of Ideas) in May 1970. His courageous poetic metaphor uses the technique of bold exaggeration and caricature to sharply criticize the corruption of the Korean society under military elitist rule. The Five Bandits represented a tycoon, an assemblyman, a government official, a general, and a minister.

As Time put it:

A typical portion of his Five Bandits describes ministers and vice ministers: "They waddle from obesity, and sediment seeps from every pore/ ... They command the national defense/ with their golf club in their left hand/ While fondling the breasts of their mistresses with their right."

I wonder how much of his poem is applicable today?
Posted by matt at 3:14 AM

A short note: the Chinese characters for Kim Chi-ha's pen name in the Japanese book are not correct, even though the same ones (芝河) have been used in Korea as well. "Chi-ha" in his name means "underground", picked when Kim was walking in Seoul and he needed to choose a pen name as someone else already published was his namesake. There were so many "underground" (지하 地下) establishments such as tea rooms around that he thought that Chi-ha might sound nice.