Craters and redevelopment in Yeouido

At 8:50 pm on September 19, a retaining wall at a construction site in Yeouido collapsed, causing a crater to open under a street next to the site. 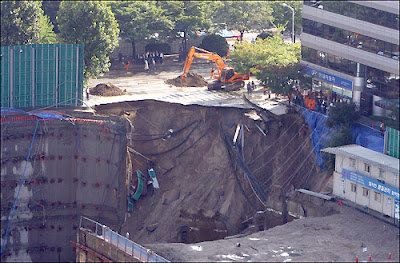 The Korea Times wrote that

A two lane-road next to the construction site of the International Finance Center in Yeouido, Seoul, on Wednesday, collapsed, causing a 50-meter-long, 20-meter-wide and 30 meters-deep crater. The pit swallowed five trucks and resulted in severed electric cables causing power supply stoppages on 48 buildings nearby. Also a water main burst causing the area to be flooded. The power outage caused traffic signal failures and severe traffic jams continued till Thursday morning. A rescue team managed to save a 59-year-old construction worker, Lee, from the site. Police speculated that the ground became weak due to digging at the construction site combined with the downpour.

Korea Beat also translated an article about it:

A Mr. Kim (42), who witnessed the incident, said, “nearby buildings suddenly lost power and then with a roaring sound the road by the construction site started to sink and then caved in, and cars parked on the street fell into the hole.”

I couldn't help but think that the photo above reminded me of the collapse of a retaining wall at Gajwa station on June 3 of this year: 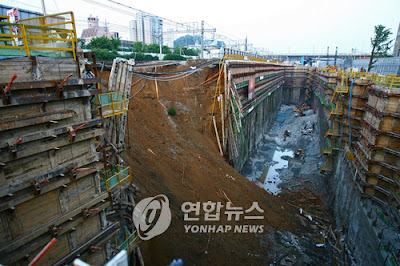 This picture accompanied the Korea Beat translation, but in the comments section it was suggested that it was a fake, and that the cars at left were photoshopped. 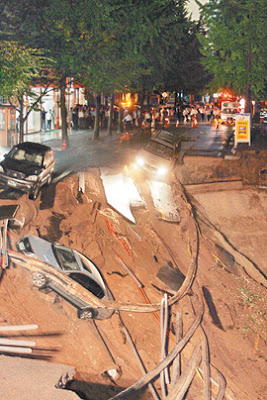 However those same cars can be seen in the crater after falling in: 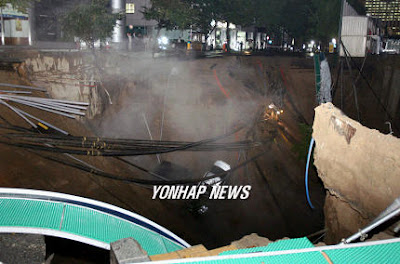 The car with its lights on, the gray car with the sunroof and the black SUV seen above are all in the crater. 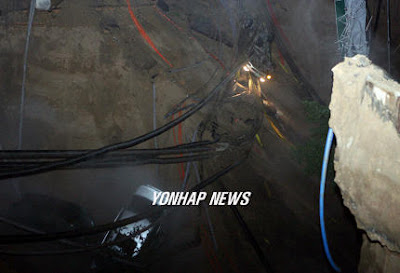 The car can be seen from another angle: 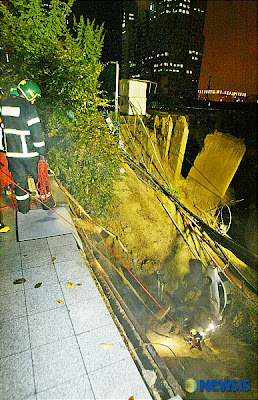 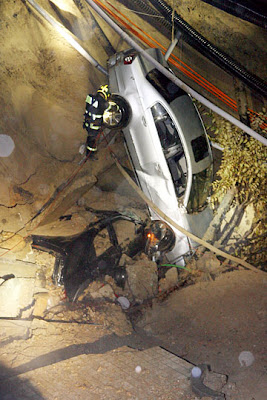 Here's another shot from the same vantage point of the photo above. Note the broken pipe with water pouring from it and the broken hoarding. 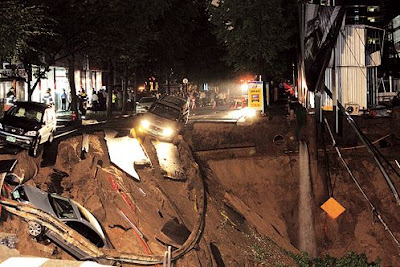 This shot was produced by zooming in quite a bit, as the following shot shows: 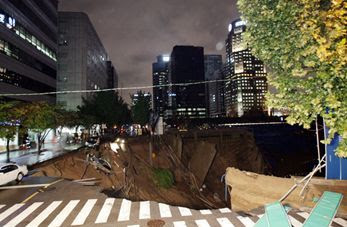 There was indeed an SUV teetering above the grey car with the sunroof, however; the SUV is just visible at the top of this picture: 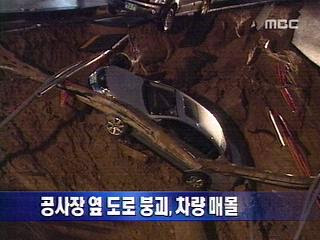 Both can be seen in this video. Below is a screenshot from a similar video: 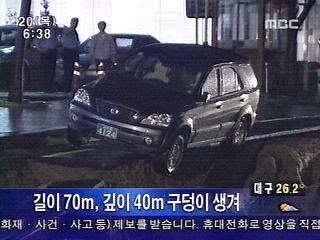 As you can see below, the odd lighting in the picture in question is likely due to the fact that large spotlights were shining into the pit. 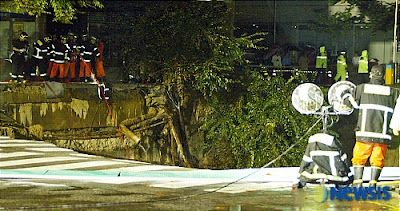 Mix this with a slightly grainy quality which is perhaps due to the zoom and you get a photo which looks odd enough to be considered fake. At any rate, this is the second time in five months that craters have appeared in Seoul next to a large construction site. It's been very lucky that no one has been killed in these cave-ins, like in this accident. Many deaths have occured this year, however, as this July 29 Korea Times article relates:

According to the Labor Ministry, some 2.8 million are employed by the construction industry. This year alone, 157 were killed and 3,748 were injured, up from 19 deaths and 362 injuries of the same period of last year.

Here's a shot of the construction site for the International Finance Center, with the crater in the foreground: 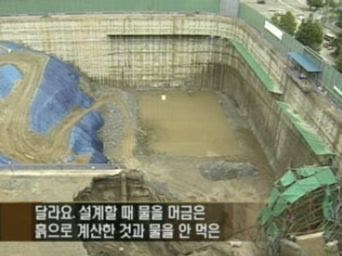 Some earlier shots of its construction were taken by Jon at I'm a Seoul Man. He also has photos of and links to other projects on Yeouido, as well as predictions as to where future redevelopment there will take place. The IFC and Parc 1 are being built on the last empty lots in Yeouido, and are shown below (the crater is marked in red). 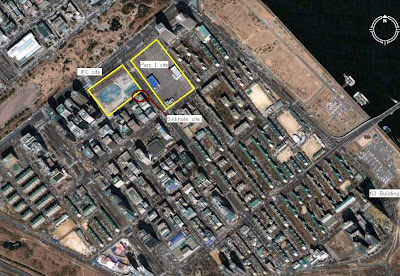 Below is a rendering of what Yeouido's skyline will look like when the IFC is done (I imagine there will be some delays due to this collapse).

What's missing in the above photo is a rendering of the Parc1 project, which will sit between the IFC and the twin towers at left. This rendering shows Parc1 with a strange version of the IFC next to it: 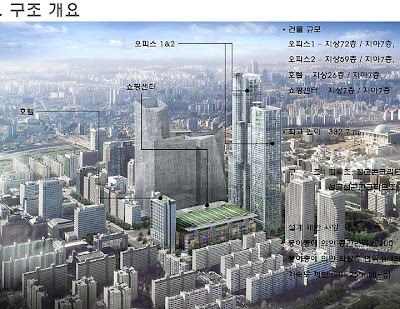 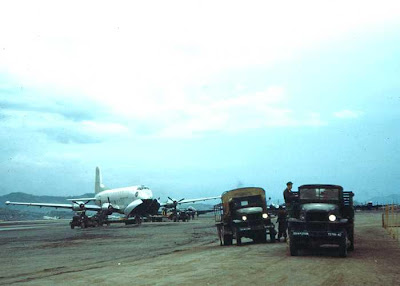 ...or in 1968, when the levee was built around the island to prepare it for development... 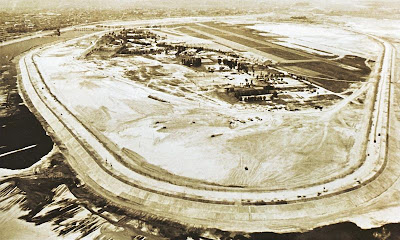 ...or in 1971, when the Shibum apartments were completed (note the National Assembly being built in the background).

More information on Yeouido Airport can be found here.
Posted by matt at 1:25 AM

Hi Matt,
Only just got round to reading your blog. Thanks for the link.

That is a pretty devastating blow for the construction site.
I am sorry to have missed the excitement.

While I was living there and watching the progress it was impressive the way the excavation kept getting deeper and deeper, but you would have thought with the earlier crater from the railway site they would be very focussed on checking it was safe. I guess not.

Wow, how did I not know Yŏŭido was used as an airport? That is cool. Thanks for the info, as usual.