The Korea Times reports that arson is the most likely cause of the Yeosu fire:

A 39-year-old Chinese-Korean detainee is suspected to have started the fire at Yosu immigration detention center [...] The interim conclusion was made after police found two cigarette lighters in the cell of the detainee named Kim Myong-sik who died on the scene together with the other detainees.

Kim entered the country through Inchon in October 2005 and worked as a construction worker in Kwangyang, South Cholla Province before being taken to the center last month. He had been behaving suspiciously weeks before the fire, according to officials at the detention center. He was caught two times smothering tooth paste on the cameras. He was alleged to have flooded his cell with water after breaking water pipes in his cell. However, Kim did not receive any disciplinary measure other than being sent to a solitary cell for five days in January.

I've also found more information on the layout of the immigration center: 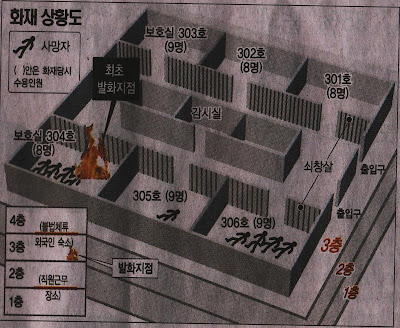 The map above is scanned from Monday's Chosun Ilbo (we have a subscription at work... honest), but wasn't accessible on their website. It gives a good idea of where the fire started, which cells people died in, and how many were in each cell (which is in brackets after the cell number). To put it in numbers, four out of eight died in cell 304, where the fire started, while one out of nine died in the cell 305, compared to four out of nine in the cell 306. 26 people were in those three cells, and it would likely be them, along with one other, who make up the 27 injured or dead. For a better idea of how cell 304 was laid out, look here.

In other news, the Chinese government, known for its concern for human rights, has "called for a thorough investigation into [the] fire [...] and to take proper measures against those responsible." Hopefully the Chinese ambassador remembers that South Korea hasn't executed anyone for the last ten years; he might be disappointed otherwise.

Anyone who's been anticipating a flood of stories about how badly treated illegal workers are won't be disappointed, however. The Hankyoreh has two good stories: one about the poor conditions of the detainment centers, and another about the "culture of fear" created by immigration raids which rarely are accompanied by warrants and which may well be illegal.

The Times article linked to above is an updated version of this one, which has a few extra tidbits like this:

In a study of 16 immigration centers around the nation last year, the Human Rights Commission reported that foreign nationals kept at the facilities stay for an average of 24.9 days, which is higher than the legal limit of 20 days.

The Chosun Ilbo has an article about the complaints of relatives of those who died, some of whom weren't contacted as next of kin.

Wreathes sent by Justice Minister Kim Sung-ho and Foreign Minister Song Min-soon were laid at a temporary altar for the victims at Yosu Seongsim General Hospital. "We want to remove those wreathes," said family members. "The justice minister visited the altar Monday evening, served a cup of liquor and left without exchanging any words with the bereaved families."

This article almost makes up for the Chosun Ilbo editorial which talks about how “embarrassing” it is for Korea to have such a tragedy occur at a government facility, and ends by wondering "how many more horrible tragedies must happen before Koreans take fire safety regulations seriously." No mention is made as to why those people who "had come in search of the Korean Dream" were stuck in those cells in the first place.

The Korea Herald also has an article titled "Maltreatment of illegals shocks Korean society", which is the first in a series of five articles on the topic. These are just the articles in English. There are dozens and dozens of articles in the Korean press about this fire, so hopefully, as usually happens during a media event in Korea, the spotlight on the treatment of migrant workers will create a space for civil society to press for and achieve positive change of some sort.

Also, it wasn't until I saw this article that I realized that the English teacher who wrote the Yeosu "Prison Diaries" was known to the media here.

I'm sure there will be more to add to this in the coming days.

(Crossposted at Two Koreas)
Posted by matt at 2:30 AM

They're not supposed to have them, actually, so the authorities say they are investigating how he managed to smuggle them in. Whether this is true or whether they're just saying it to cover their asses I have no idea.

Nice investigative work. Why detention? Why not deportation?

Deportation is supposed to be the ultimate outcome, but immigration doesn't help them collect their final paycheques, so they have no money to pay for their flight home (their monthly salaries having been remitted home to their families or to pay off the perhaps $10,000 debt they incurred being (legally) brought here). The Korean government only pays if they harm themselves (or if they organize a hunger strike in the center - that got someone I know a quick trip home).