As I mentioned in my first post about Banghwa-dong, the area has a number of large redevelopments and farmland developments occurring presently or about to begin soon. If you look at the map below, you can see the three or four square kilometers of farmland that will be turned into the Magok R&D city (the Han River, along with the posts for the Magok Bridge (being built for the Incheon Airport train line) can be seen at top right). 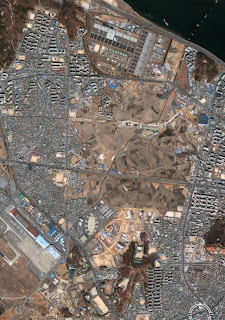 Just below the open space of the fields can be seen a lighter-coloured area, seen in more detail here: 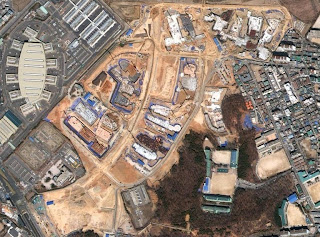 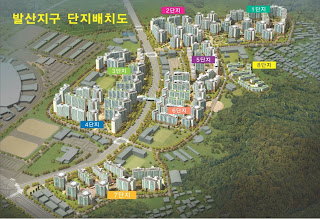 The satellite photo above was taken just under a year ago, when the foundations (and underground parking lots) were being built. Presently, the buildings are almost finished:

Above you can see the development stretched out for over a kilometer, whereas below, from the angle I'm viewing the development, many of the buildings are hidden from view. Despite that, I'm pretty happy with the way the photo turned out.

Occasionally, as they encroach upon the surrounding farmland, they almost look picturesque... 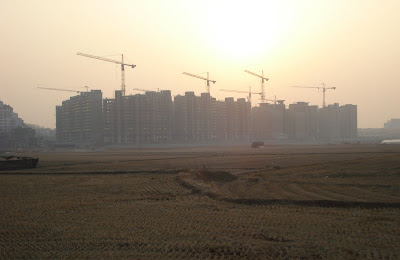 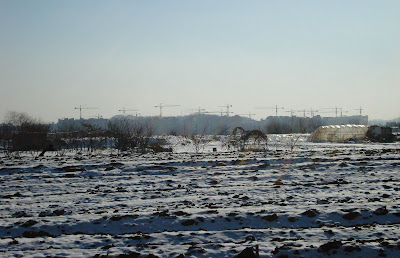 As I've pointed out before, Kim Ki-chan captured the Gangnam area as it was turned from farmland into apartment buildings back in the early 1980s (among many, many other subjects), and his work (kudos to the Metropolitician for introducing me to it), as well as Antti's over at Hunjangûi karûch'im have gotten me interested in documenting both the developments and those places about to fall under the wrecking ball. As it turns out, I live in an area that will give me lots to document... but more on that later.
Posted by matt at 1:24 AM