I hopped on my bike on Monday afternoon to take a few photos of the Incheon Airport Rail Bridge to show how it has come along since taking photos back in the summer. Along the way I stopped at the bird sanctuary along the Han River just north of where I live.

It used to be a little more picturesque, with bushes and tall reeds everywhere, but it still hasn't recovered from last summer's flood, which scoured the riverbank and carried off a large portion of the vegetation. To the right is the Banghwa bridge (at 2 km, Seoul's longest), while just beyond the walkway on the right the Haengju bridge can be seen. In the center, on the north side of the river (in Goyang city) is Deokyangsan, where the Haengju Sanseong, or mountain fortress, can be found. It was there, in February 1593, that one of the few Korean victories on land took place during the Imjin War (Photos of the present day memorial are here).

I didn't see many birds around the bird sanctuary, but further down the river there were lots of ducks to be seen (perhaps it was smart of them to be upriver from the sewage treatment plant?). I haven't a clue what kind they are, though those in foreground look similar to mallards. Having grown up next to a river, it was nice to be by the water; there's a certain smell that I can't really define but when I was there I realized I that I missed it. 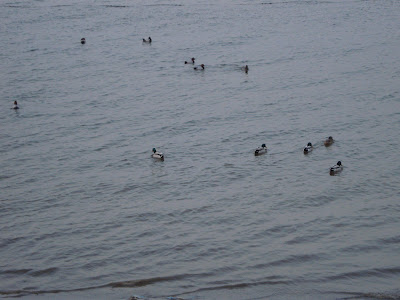 Further upriver can be found the Magok bridge, which has changed since I last photographed it in the summer.

After leaving Gimpo Airport, the train will run under the Magok fields near my house and then come out of the tunnel just south of the bridge. It was dark when I took this photo, looking north towards the bridge (the lights on the horizon line the Olympic expressway), but you can see from the incline that the opening to the tunnel will be close to where I was standing when I took the photo. 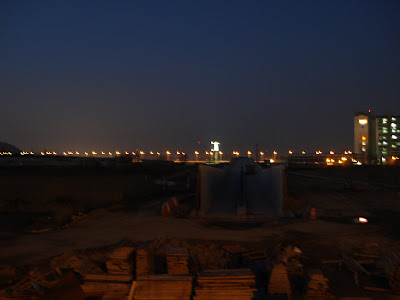 To help visualize, I marked the vantage points of the photos I took below. The map is essentially an enlargement of the top right corner of this map. The piers for the bridge can be seen at the top in the center, and if you go south from there and follow the stream until it meets the road at bottom left you can see where the above photo was taken. If you look at this area in the map I just linked to above, you'll see that the mountain is mostly surrounded by apartment buildings, but as you can see below, the neighbourhood to the south of it is quite a bit older. The mountain is Gungsan, which was the location of a Baekje era mountain fortress, and the neighbourhood was once known as Yangcheon. The street running diagonally across the bottom of the map is Yangcheon-gil, and the school visible at bottom right, Yangcheon Elementary, dates back to 1900, making it among the first elementary schools in the area (if not, perhaps, the country). 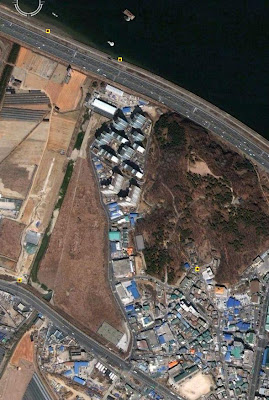 Part of this is due to the fact that Yangcheon was the center of Yangcheon Hyeon (county) during the late Goryeo and Chosun eras, an area that fits within modern Gangseo-gu in Seoul (ironically, Yangcheon-gu is several kilometers south) More information on the area's history can be found halfway down this page. If we look at the 1875 map below, the mountain at top center is Gungsan, while the mountain at top left is the Haengju Sanseong; south of it, on the other side of the river is Gaehwasan, which is where Banghwa-dong is. Just south of Gungsan are a number of buildings representing Yangcheon, and it's obvious from the arrangement that it's the center of the area. As you might see in the map above, however, these days it's rather run down in comparison to the large, early 1990s apartment complexes surrounding it.

All that's left that harkens back to the prominence of the past is the park on Gungsan and especially the Yangcheon Hyanggyo. Hyanggyo is defined as 'a local school annexed to the Confucian shrine.' These days it's nestled in between several houses and a field on the slopes of the mountain. 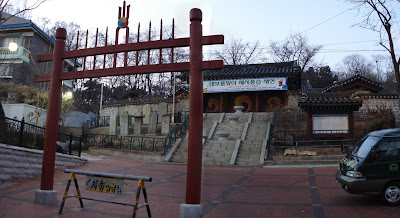 While it's not much to look at from the outside, it looks nice enough on the inside. 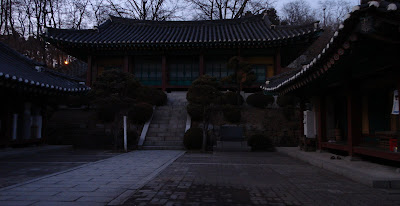 As the text below tells us, it was built in 1412 and is the only school of its type remaining in Seoul. 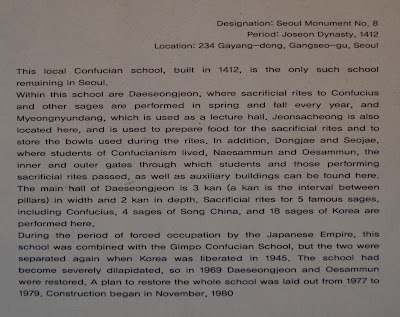 There's quite a bit of interesting history in this area if you know where to look; it just doesn't get mentioned much. It's also nice to go from the concrete jungle to a river full of ducks, past massive construction projects and historical buildings nestled in old neighbourhoods, to farmers' fields and back to the city in the space of an hour or so...
Posted by matt at 2:25 AM

The ducks are Mallards and Pochards.

I've also seen Mergansers on the Han river
and Pintail ducks on one of tributaries.

The holiday was a good day to explore the construction sites, I got some good photos of the digging on the other side of the river. I've still not got round to uploading them!

I kind of figured you'd set me straight on the ducks! Look forward to seeing the photos...