The Chosun Ilbo reports that

On Tuesday at 11:05 a.m. a train left Gimpo Airport in a trial run of the new Airport Railroad. The railway is scheduled to begin operations March 23, some six years after construction began in April 2001. The 37.6km line from Gimpo Airport to Incheon International Airport is the first segment of the two-phase construction project of the country’s first private railroad. The other line connecting the Incheon airport and Seoul Station is expected to be completed by December 2009. The project will cost W3.95 trillion

More information can be found at the website of the Incheon International Airport Railway Company. There you can find what the new subway maps (Korean) will look like (the subway employees must get annoyed having to replace them every few months), as well as have a look at renderings of the train interior which looks quite different from the picture seen in the article above.

I wasn't surprised to see that Jon over at I'm a Seoul Man had already posted about this. I enjoyed his descriptions and photos awhile back of the construction sites around Yeouido - it's always good to get information about the different developments going on around the city, but not many bloggers share this interest (though Skyscraper City's Korea forum is very useful in this regard). Also, his trip on a randomly chosen bus was interesting (in part because the bus's route finishes a two minute walk from my house); I can never seem to make the time to do something as random as that, and it reminds me of this diagram from the book The Situationist City: 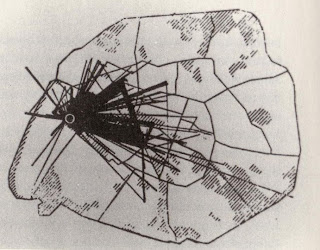 "Plotting of all the trajectories effected in a year by a
student inhabiting the 16th Arrondissement" (1952)
The main triangle above is between the student's home, school, and piano lessons. Guy Debord used this diagram in his article on the Theory of the Derive, and hopping on the first bus that comes by is a step away from that triangle, so to speak. But I digress.

Regarding the airport train, Jon points out that the train doesn't seem that much of an improvement over the buses, especially for those who live outside of Seoul. Once the second part of the railway is complete, however, it may be much faster, at least for Seoul residents north of the river, as the second part is where buses would encounter all the traffic. Still, there's the whole problem of hauling your luggage underground and back up again, which doesn't seem very enticing. I remember using the subway when I first arrived at Gimpo airport, luggage in hand, six years ago, before there were elevators. I never repeated the experience.

Here's a map of the route of the second part of the railway. I've taken a few pictures at a few points on the route (marked in yellow). (A mistake - the Incheon Line doesn't go to Yongsan, though the Seoul-Sinuiju line, which will run alongside it underground as far as Susaek, might.) 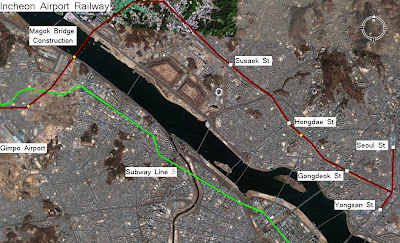 Where it crosses the Han River, the new Magok Bridge is being built. The photo below is from last summer, but it hasn't changed too much since then: 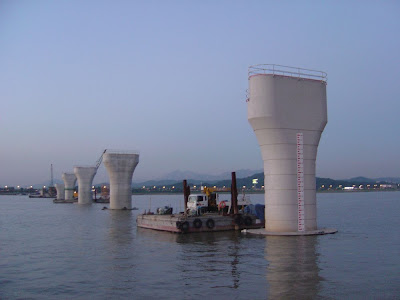 More photos can be seen by looking through the galleries of the construction on the Railway's website (here and here). Pictured below is an entry point to the tunneling not too far from my house (and marked on the map above near Gimpo Airport). Essentially, first they drive in the piles, then excavate, then built the framework, and then excavate further, until they get deep enough for tunneling (which must be fairly deep, as the railway will have to go under the new subway line 9). 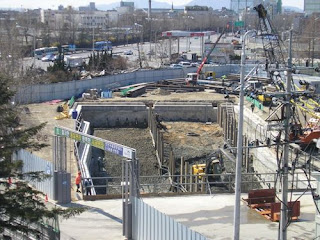 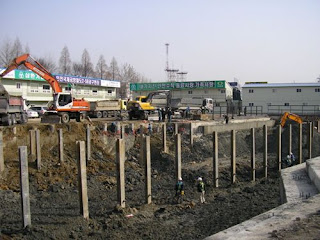 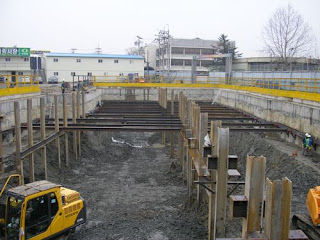 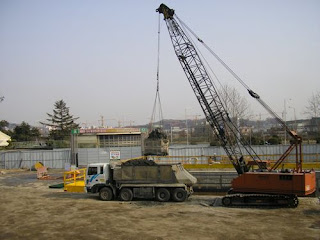 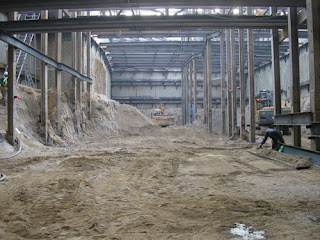 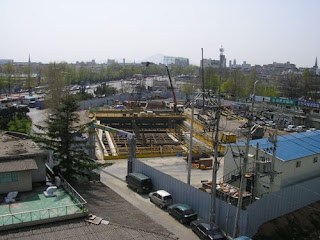 Here's a photo I took a few weeks ago of this site: 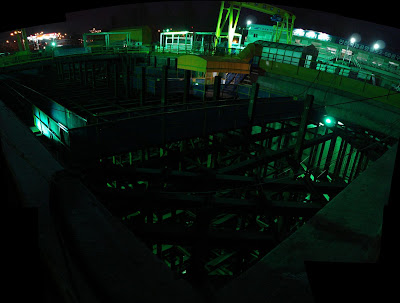 I'm assuming, since it was in the same group as the other photos, that this is what it looks like at the bottom: 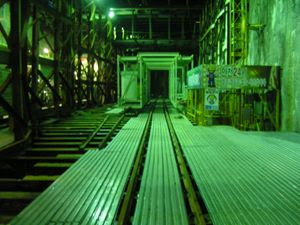 Closer to downtown, the route is being tunneled underground beneath the railway I mentioned in this post, the one what will be turned into the New Daehangno park which will run by Hongdae and Shinchon. I took some photos of the area where the tracks once were (from the street with the Sexy Pig restaurant on it). 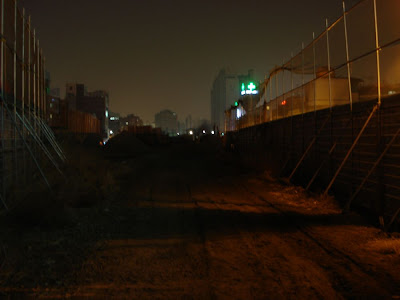 As you can see, there's not much going on. I don't know if this area will look like the example above, consisting of tunnels with a few entry points from the surface (allowing them to start working on the park sooner), or whether the entire area will be excavated (something I doubt). 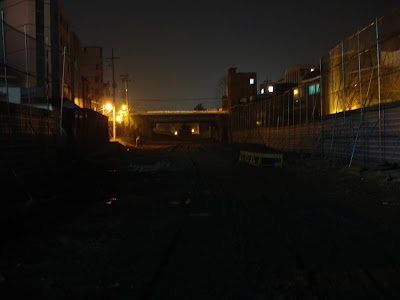 It's in this strip running through central Seoul that the other effects of this railway, including new parks and gentrification, will be felt.
Posted by matt at 2:42 AM

The airport line in the city is being done in stages. Right now, most of the work is going on a block further east from the Sexy Pig restaurant area. The area roughly opposite Seogang University is the prime construction site at the moment. It is indeed a damn deep hole... although they have put in the frame and are beginning to fill in the site a bit now. I believe they will finish what they are doing first, then take down the train overpass/bridge that crosses the road (down from the Grand Mart), then begin more elaborate contruction on the way to the future Hongdae mega-train/subway station.

Thanks for the links!

The Chosen had a lot more information there. The part about having to get two separate tickets for the train and subway is one more reason for sticking to the buses in my opinion.

The digging at the point Mark mentioned is moving at great speed. I have photos from three different dates and the progress is impressive.

It seems there's quite a few construction / rail enthusiasts around these parts.
I wonder if there is anyone on the construction team who speaks enough English to be able to give us a tour?
That would be fascinating.