Robert over at the Marmot's Hole has another great collection of photos of Seoul's early modern architecture taken around Myeongdong (especially the panorama taken from in front of the post office). What caught my eye was the Korean blog he linked to showing pictures of the Keijo Post Office, some of which I'd never seen before. The title of this post? [염상섭 - 삼대 (4)] 경성우편국, or "[Yeom Sang-seop - Three Generations] Keijo Post Office". It turns out this blogger has done something similar to my Three Generations walking tour post, but has turned up more exact locations and some better photos. Slightly aggravating is the fact that he posted these several months before I spent hours researching my post. Oh well. I posted photos and references to things he didn't, and vice versa, so they compliment each other nicely, I think.

He has posts on Cheongmokdang, the restaurant where Gyeong-ae and Maedang first meet, the hospital where Pil-sun's father is taken (near Gwanghwamun), Namsan Shinto Shrine, the aforementioned Keijo Post Office, the Governor General Library, Hwanggeumjeong intersection, Gyeongbokgung's Yeongchumun, Junganggwan theatre, Gyeonggi Provincial hall, a rubber factory similar to the one Pil-sun worked in, and the Hyoja-dong streetcar line terminus.

These two photos, which I think I'll add to the original post, seem to be taken from the same vantage point, just north of the post office, one looking south at the post office and the mitsukoshi department store... 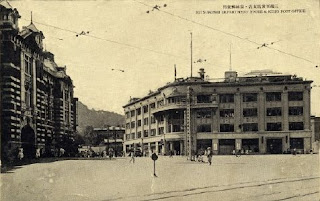 ...and the other looking southwest towards Cheongmokdang restaurant (far left) and th Bank of Korea. 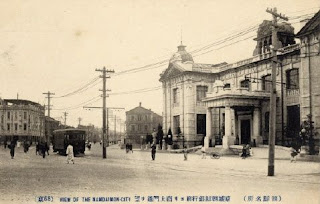 Do compare them to Robert's panorama of the area now, from a vantage point just south of the one above; these days there's a little more traffic than in the past.

Speaking of old photos, the Chosun Ilbo has an article about a book documenting 100 years of overseas Koreans, which has some interesting photos. I do wonder of the Kanto earthquake photo is actually of murdered Koreans (such pictures do exist, of course) or of someone pulled out of the water after the tsunami (notice the netting and ropes and pulleys by the bodies).