Even the androids aren't safe 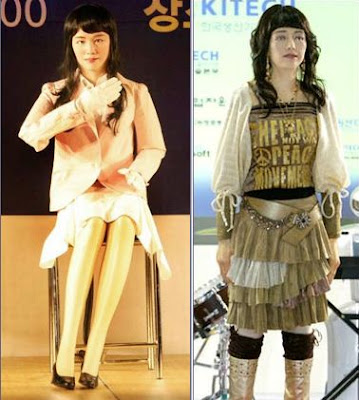 EveR-1 and EveR-2 - spot the difference
I don't mean to talk about plastic surgery all the time these days, but the title of this article in the Korea Times is hard to ignore: "Android to Get Plastic Surgery". We're told that the

Korean "female'' android, dubbed the EveR-2 Muse, [will] undergo [...] plastic surgery for more attractive looks, according to its creator Baeg Moon-hong at the Korea Institute of Industrial Technology on Monday.

Actually, you might want to think about dressing her in a way that doesn't look like she lost a really ridiculous bet. As for her looks, you be the judge.

As the country's second female android (technically gynoid), the EveR-2 Muse gained prominence late last year with its ability to sing a song.

"Gained prominence" in what way? Do you mean the way in which the Korean media took part in lots of photo ops and the chance to extoll the virtues of Korea, the hub of (technological) Asia, after coming up with the "World's Second Android"? Hey, second comes right after first! I seem to remember her being able to sing being linked to the Korea wave as well, but I could be wrong.

In response to opinions that it looks homely in comparison to its predecessor EveR-1, however, EveR-2 has not appeared in public events for the past couple of months.

Luckily, androids aren't yet capable of killing themselves.

"Originally, I thought that EveR-2 is prettier than EveR-1 because the former looks like a real, flesh and blood human being while the latter looks like a doll,'' Baeg said. "But the public seems to disagree with me and has favored EveR-1. So we decided to conduct the facelift of EveR-2 while making its hands smaller,'' said Baeg, who also crafted EveR-1.

I'm curious as to why Baeg (what in Gorea is up with that romanization, anyway?) is surprised that the public prefers dolls to "real flesh and blood human being[s]", considering the number of women who feel presssured to undergo plastic surgery to make themselves look like every other mannequin they see on TV and billboards. Did anyone notice that the EveR-1, the doll-like android, looks quite a bit younger (like a student?) than the one in 'need' of plastic surgery? Or that she cannot move her lower body? Does anything seem vaguely disturbing about any of this? Baeg does give a reason for an android needing plastic surgery, however:

"Unlike humanoids geared mainly toward developing a variety of functionalities, androids need to look good since they meet people face-to-face,'' Baeg said.

Nice to see that the female androids of Korea are going to face the same problems and need for 'image enhancement' as many Korean women, especially those working as secretaries or who are in the media, such as actresses.
Yes, what follows is a bit off on a tangent, but not one that seems totally unrelated in my head. I haven't a clue if the aforementioned pressures upon Korean women and androids affected Jeong Da-bin, or played a role in her suicide on Saturday. I hadn't realized I'd seen a lot of her TV shows and films until the events of this weekend. Arirang played Non-stop with English subtitles four or five years ago, and I've seen some of Attic Cat as well. My standout memory of her is in the (rather lacklustre) film "The Guy was Cool", where, after humiliating herself by dressing up in a ridiculous outfit and getting stuck in the fence of her boyfriend's highschool, runs off to a noraebang and sings a horrendous version of the Hwang Shin-hye band song 'Jambbong' (yes, the food), the original version of which can be heard here. Her portrayal of the character shrieking off key and beating the tambourine randomly is hilarious, and it's how I'll always remember her. I hope she doesn't mind. 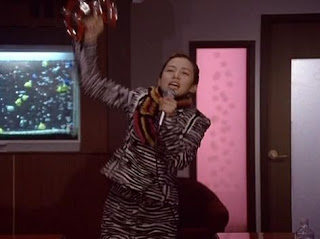 Now that I think about it, it's odd to consider that her character in the film tried to dress up in order to look older and "sexy", and got chastised for it, just as the second Korean attempt at an android, the older looking EveR-2, was also rejected by the public. I'm sure it's just a coincidence.
Posted by matt at 3:40 AM