"Illegal native speaking instructors will no longer be tolerated"

As to how these changes were to be legislated, four days earlier, on October 24, 2007, the day after the immigration policy meeting to which Lee Eun-ung was invited, bill number 7642 had been submitted to the National Assembly by ruling party representative Shin Hak-yong. This bill was not passed, however. As Benjamin Wagner described it in a petition to the National Human Rights Commission of Korea,

12 members of the National Assembly introduced Bill No. 7642 to establish “the legal basis to require that foreigners applying for an employment visa submit a criminal background check and a health certificate.” When this bill failed to establish “the legal basis” to implement these requirements, the decision was made to establish an immediate program to carry out, by extra-legal means, what Bill No.7642 had attempted to legislate. This program came in the form of a “policy memo” (without the proper status of law) created by the Residence Policy Division of the Korea Immigration Service in November 2007 and entitled “원어민회화지도 (E-2) 사증제도개선안내.”

On December 10, the new E-2 visa requirements were released in English, which included, along with criminal record checks and drug tests, tests for HIV status. Here is the E-2 Policy Memo: 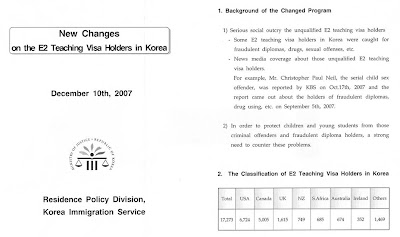 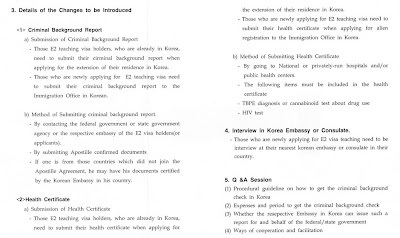 As it notes, the 'Background of the Change[s] is the "Serious social outcry [caused by] the unqualified E2 teaching visa holders" due to "news media coverage about those unqualified E2 teaching visa holders." As noted previously, all of the negative articles connecting English teachers with AIDS, even, in one case warning "Beware of the Ugly White Teacher," were the result of efforts by Anti-English Spectrum, who fed tips to the media and then police (or vice versa).
While this campaign by AES had succeeded after little over a year (after the Breaknews article appeared in September 2006), the E-2 HIV tests would take a decade to undo, with the first step in that effort being taken almost a year later when it was realized that the legality of the HIV tests thousands of foreign teachers already in the country had been subject to rested on nothing more than a policy memo.
Posted by matt at 4:27 PM