News reports on arrest of instructor link him to 'AIDS threat'

Part 1: The 1988 Olympics and Korean fears of AIDS
Part 2: HIV testing for foreigners in the aftermath of the 1988 Olympics (unfinished)
Part 3: Anti-English Spectrum begins to link foreign English teachers to AIDS
Part 4: "Tracking [down] blacklisted foreign teachers suspected of having AIDS"
Part 5: Using their own articles, Anti English Spectrum petitions for E-2 visa changes
Part 6: The Chosun Ilbo: "White English instructor threatens Korean woman with AIDS"
Part 7: News reports on arrest of instructor link him to 'AIDS threat'
A month or so after having his "AIDS threat email" highlighted in several articles by the Chosun Ilbo in May 2007, much to the delight of Anti English Spectrum, the Australian instructor who sent it found himself in the hands of the authorities. As AES leader Lee Eun-ung wrote in an op-ed article published in February 2009,

After this writer and others pursued him with the cooperation of relevant authorities, he was finally arrested by police in the capital region after living at a guest house in Seoul.

Whether or not he was actually involved in catching the culprit, the content of the Chosun articles carrying Anti English Spectrum's 'White foreign English teacher = AIDS' propaganda was referred to when his capture was reported by numerous media outlets. On the morning of July 2, 2007, NoCut News published the first report about the arrest of several foreign English instructors, including A:

Police have arrested a bunch of unqualified foreign English instructors who went as far as forging well-known overseas university diplomas in order to work in Korea as English instructors. Among those arrested, some were fired for flirting with students and after being hired again as an instructor, stalked Korean women.

'I' is a Canadian who has worked at a foreign language hagwon in Anyang for more than three years. He graduated from a famous university in Canada but all his background consisted of was working in a factory after graduating high school.

Canadian J made tens of millions of won working as an instructor at an English hagwon in Gangnam in Seoul, but only worked at a fast food restaurant after graduating from a junior college.

The article then described how it was possible to get a job and an E-2 visa with a fake diploma, and the connivance of recruiters and employers in this. It then continued:


For some foreign instructors, it's not just English proficiency but conduct which is a problem.

Australian English instructor A was fired for habitual excessive physical contact with students and KFTRA (Korean native speaking instructor recruiting association) put him on their blacklist, but he was openly hired as an English instructor. What's more, A bore a grudge against the Korean girlfriend who broke up with him and who had a different boyfriend and cursed her, saying "Last year in the Philippines I had sex with a prostitute and now you have caught AIDS," and also stalked her via email and phone.   [...]

The Foreign Affairs Division of the Seoul Metropolitan Police Agency has arrested three teachers including the Australian A on suspicion of forging diplomas to work as English instructors, and booked I (29) without detention, and has also booked five people without detention including Mr. Lee, the owner of a employment agency which arranged jobs for instructors despite knowing they were unqualified.

During the police investigation they stated that "We came to Korea because we heard that in Korea that you can easily work as an instructor and make lots of money."

YTN then broadcast a news report about the arrests at noon (which was repeated a least twice):


As ever, there are foreign instructors with forged degrees and ineligible visas 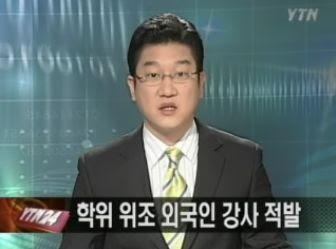 It's been revealed that there are still unqualified foreigners teaching English in places like hagwons or youth centers.

And there are still incidents of using fake degrees to get E-2 visas, which are given to native speaking instructors. 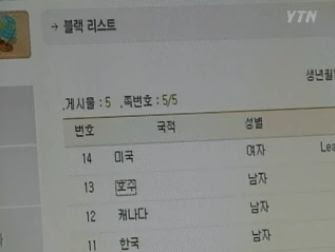 In then explained the blacklist [above], how people got on it ('taught while drunk,' 'fraud'), but said that some of them were still able to teach, and that some did so on tourist visas.


32 year old A from Australia was caught for teaching at a hagwon without an E-2 visa.

A, whose name is on the blacklist where he is criticized for behaviour approaching molestation of students, has despite this taught students at various hagwons since 2001. 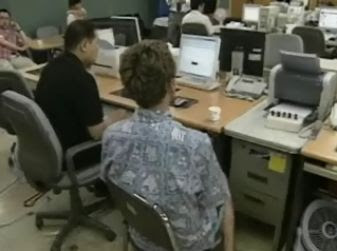 [One of many shots of A at the police station.]

"Why didn't you get an E-2 visa?"
"Basically, I didn't know how long I was going to stay in Korea, so I thought, I will work for a couple of months, and if I like the school, then they will give me an E-2 visa." 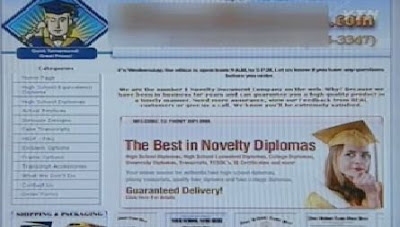 It looked briefly at the E-2 guidelines and how diplomas could be faked, and then criticized the attitudes of hagwon owners who said they were too busy to check. It ended by saying that the damage caused by unfit instructors was shifted by irresponsible hagwons to the students. 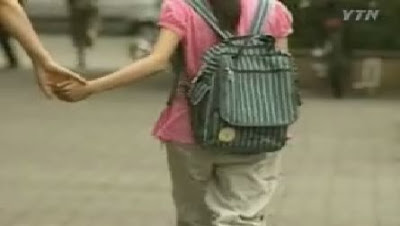 The YTN report did not mention the 'AIDS threat.'

Yonhap, on the other hand, was more than happy to put the 'AIDS threat' in its sub-title in the article in published at noon (republished by the Chosun Ilbo and Joongang Ilbo), which reiterated the story of I and J, who it said made 30 million and 60 million won, respectively, and told the story of the third teacher, a Canadian, S, who bought a diploma from the University of Manitoba for $300 in 2003 and made 100 million won working at a hagwon in Songpa-gu on an E-2 visa.

Police also arrested Australian English instructor A (32) for threatening a Korean girlfriend who broke up with him as if she had caught AIDS (contravening the Law related to punishing violent behaviour).

A, who was dumped by his Korean girlfriend who he dated for about a year, is supected of calling or sending her emails six times since last December saying "I had sex with two prostitutes in the Philippines. I hope you gets AIDS too."

Police said that A graduated from a 4 year university in Australia and was issued an E-2 visa normally but was put on a blacklist by the Korean native speaking instructor recruiting association (KFTRA) for arousing criticism and being fired for molesting students.

It ended by mentioning the five Korean brokers who were arrested. Needless to say, with the Yonhap wire service highlighting the AIDS threat, other news outlets soon picked it up.

An hour later, the Kyunghyang Sinmun published a report which began just like the YTN story and, like the Yonhap article, told the story of S, I ,and J, before getting to A.

There was also a problem with some foreign instructor's attitudes.

Police also arrested Australian A (32) on suspicion of threatening a Korean girlfriend who broke up with him, saying "Since you had sex with me you caught AIDS."

A graduated from a 4 year university in Australia and was issued an E-2 visa normally but was put on the native speaking instructor blacklist for being fired for habitual excessive physical contact with students.

It also ended by mentioning the five Korean brokers who were arrested.

Later that evening, after 9 pm, MBC broadcast a report about the arrests. 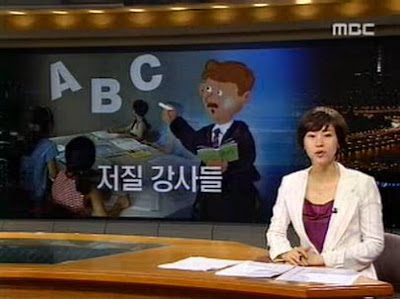 Anchor: Even now such low quality instructors are rampant in English hagwons.

Lee Ji-seon reports on native speaking instructors who make a habit of forging degrees and even molesting students.

This is a children's English hagwon in Gunpo, Gyeonggi-do. At the beginning of this year the hagwon got a flood of complaints from parents.

An instructor from Australia was molesting children.

Hagwon owner: "Children said he wouldn't let go when shaking hands. And it increased to two or three kids repeatedly and I said absolutely do not touch them."

This instructor had already been fired for molestation but was able to get a job at this hagwon without much difficulty.

This is because the instructor hid the fact he was fired and also no prior check was done by the hagwon.

Suspect: "Munhwa [culture] is different. In Hoju [Australia] it is okay to touch the child. I didn’t touch in a sexual way."

It then quickly mentioned the Canadian instructor in Anyang with the fake degree who was hired even though his visa had expired and a hagwon owner who said "I don't ask for detailed facts about their academic past because time is short."


Among such native speaking instructors there are many unqualified people involved in diploma forgery and molestation, and even alcoholics.

But because there are not enough instructors, hagwons will overlook this and so even today they are openly teaching students.

More news articles followed, some of which made reference to the fact that he had 'threatened his Korean girlfriend with AIDS,' including the Segye Ilbo ("Unqualified Shameless English Teachers... Faked Backgrounds and Molestation") and the Chosun Ilbo: ("Native Speaking English Teacher Pattern).

More televised reports were to come. Anti-English Spectrum claimed they contributed to the several of these reports, and among those that followed were reports that not only highlighted the "AIDS threat email" but also interviewed Anti-English Spectrum head Lee Eun-ung.
Posted by matt at 5:13 PM

Without a doubt, there are plenty of unqualified expat English instructors, but watching Korean "journalism" at work is a bit like watching an immune system.

For sure there are some foreigners who shouldn't be teaching here, but the bar is quite a bit higher than it was when these articles were written / broadcast fifteen years ago. On the one hand, it's nice that the media here doesn't really attack foreign English teachers anymore (with the occasional exception), but I imagine it's merely a condition in remission. I also imagine it means the media is has found other, perhaps more vulnerable scapegoats, which isn't great either.