Part 1: The 1988 Olympics and Korean fears of AIDS
Part 2: HIV testing for foreigners in the aftermath of the 1988 Olympics (unfinished)
Part 3: Anti-English Spectrum begins to link foreign English teachers to AIDS
Part 4: "Tracking [down] blacklisted foreign teachers suspected of having AIDS"
Part 5: Using their own articles, Anti English Spectrum petitions for E-2 visa changes
Part 6: The Chosun Ilbo: "White English instructor threatens Korean woman with AIDS"
Part 7: News reports on arrest of instructor link him to 'AIDS threat'
Part 8: Police, SBS and KBS highlight instructor's 'AIDS threat' while KBS interviews AES
Throughout the day on July 2, 2007, news broadcasts had reported about arrests of foreign teachers, including 'A,' who had been placed on a blacklist; some print or online media mentioned that he had also 'threatened his ex-girlfriend with AIDS' (see parts 6 and 7), but SBS decided that A and his 'AIDS threat' should be a part of their report during the evening news, and even threw in a bitterly sarcastic title to boot: 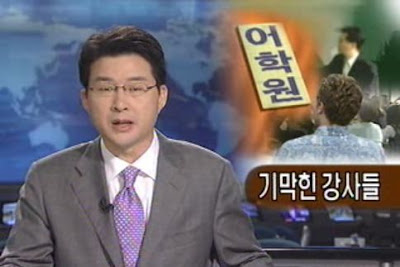 Native speaking English instructors taking advantage of the English education fever are breathtaking as they take over. Cases of faked university diplomas are commonplace, and students have also been molested.

In April 2001 Australian A received a conversation instruction visa and entered Korea.

However his attitude towards teaching was insincere and in November that year he was stripped of his visa because he molested a young student.

[Coworker: "...hit them with paper and not go to class, and would read the palms of female high school students..."]

Though hagwons had gone so far as to put up a blacklist some hagwons overlooked this and because A entered Korea on a tourist visa he was able to continue working as an instructor.

Last year when a Korean girlfriend he had been dating for a year wanted to break up with him he also threatened her that she might have caught AIDS. 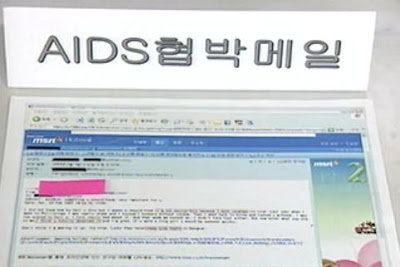 The report continued, saying police also caught three other instructors including S, a Canadian who got a fake university diploma from a broker on the internet. They were unqualified, having only graduated from high school and only having experience working in factories or restaurants, but were still hired by hagwons that didn't check their backgrounds. Though it's easy enough to get an E-2 visa with a university degree, there's no method to check for fake degrees, in part part because due to privacy issues, foreign universities won't release personal information. The report ended with:


Police have arrested and detained three unqualified foreign instructors, including the Australian, A, and have also booked seven hagwon owners who hired them. 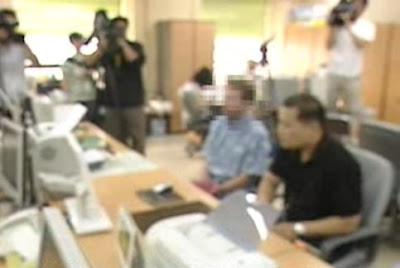 KBS also reported about the arrests of teachers numerous times throughout the day, such as in a report titled "Unqualified English teacher arrests": 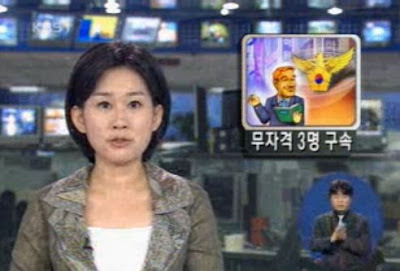 Other reports included this one (video / text) later in the day, and this one appearing in a nightly news round up the next day. These merely showed arrests, along with images of the arrested Australian.

A KBS new report on July 4, two days later, however, was all Anti English Spectrum could have hoped for and more. Appearing during "아침뉴스타임" (Morning News Time), it was titled "Native speaking instructors, 'from forging diplomas to molestation'". 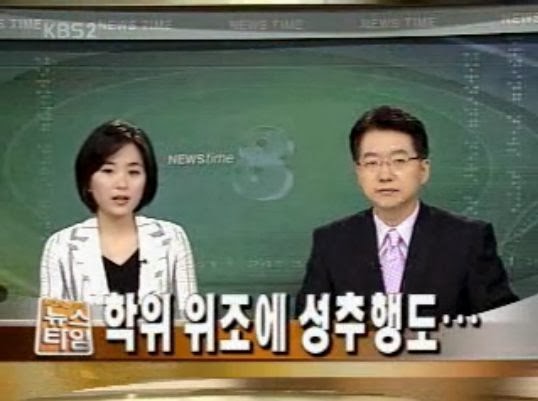 From forging diplomas to molestation'

Unqualified native speaking instructors who are taking advantage of the English education craze abound. University diplomas and transcripts have been forged, and even it's even gone so far that students have been molested.

Reporter Im Se-heum, not long ago foreign instructors were caught for taking drugs. This problem with the low aspects of native speaking instructors isn't going away, is it?

"Yes, from forging degrees to molesting students or having alcohol problems, there are many unqualified native speaking English instructors.

"However, due to high demand, unqualified instructors are openly teaching students in hagwons. [...] We report on the reality of native speaking English instructors in Korea.

The report told the story of S and how he faked his degree. A police officer then described how one teacher worked in fast food, the other in a factory before coming to Korea and becoming instructors. The hagwon passed the buck to immigration, who gave the teacher the visa, while immigration replied it wasn't easy to confirm foreign degrees.

A gyopo from the US who has taught English for 5 years in Korea described the problems with the English craze, such as some hagwons which change the nationalities of their instructors on their promotional material, in which Russian dancers are disguised as Americans and Pakistanis are disguised as Hispanic Americans. "If you're white, everything is okay. We show parents that (at the hagwon) we are using white instructors." He also explained that due to demand there were many native speaking instructors who were not qualified and whose English skills were poor. He added, "There are instructors who do not even know the passive form, who tell very sexual jokes to children, who without hesitation tell stories denigrating Korea." The report continued:


What's worse is that native speaking instructors have even molested students.

At the end of last year, 31 year-old Australian A was told by his girlfriend that she was breaking up with him and wouldn't meet him, and after that she got continuous threats via cell phone message and email. A's ex-girlfriend was unable to endure this and contacted police, and is still afraid of A. 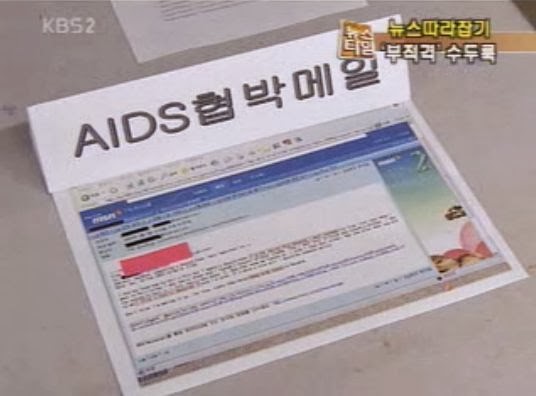 A's Ex-girlfriend: "Frankly, he frightened me. I was frightened of what [his revenge] would come to. I didn't want it to go any further." 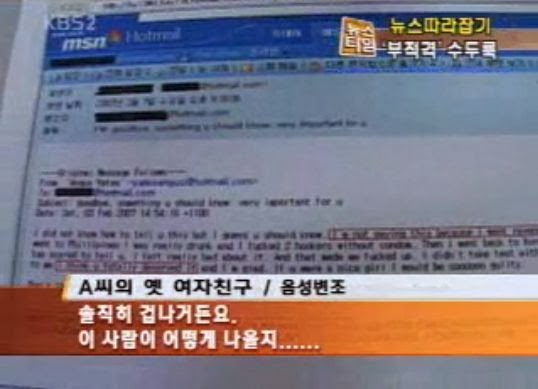 The police investigation found that A had already had been fired from a hagwon for a molestation level of physical contact with students, for which his name had already been posted on the blacklist of the 'Korean native speaking instructor recruiting association.' 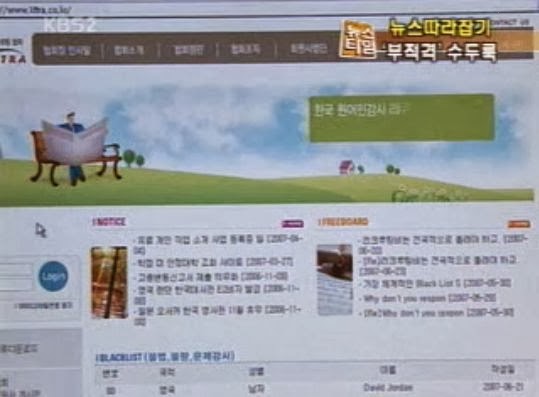 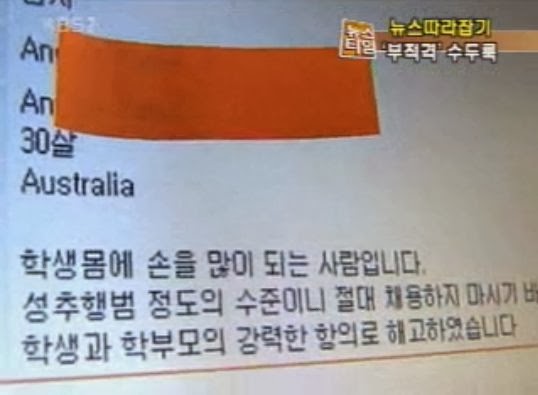 At a different hagwon which he worked at until recently, a similar incident occurred, but A claimed it was due to cultural differences. 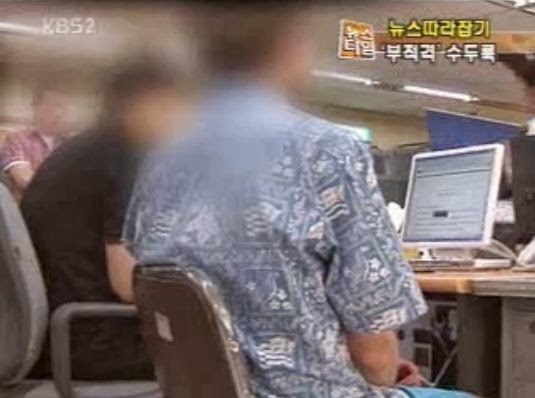 Australian native speaking instructor: "I touched them like an Australian teacher would, pat them on the shoulder, "Good job," or, you know, "See you later." Of course I'm not guilty, I touch them on shoulder, it's totally wrong [to say I molested them]. The problem is, Hoju munhwa, Daehanminguk munwha is not same."

A was also able to find any job he liked on a tourist visa. One hagwon urgently needed an instructor and prepared everything else up to housing, but of course confirming visa and ID was to be done later.

Hagwon official: I got a room for A. A long-time teacher suddenly didn't show up and since it was urgent, classes were the first priority, and within 3 or 4 days he was to apply for an E-2 visa but didn't.

Since there is a lack of native speaking instructors, hagwons are in no position to quibble over this and that. Moreover, parents prefer certain races or nationalities more than ability in instructors.

Hagwon official: "In order to have pronunciation perfectly like a native speaker, Korean people only want native speakers. They don't want Asians. The mothers themselves..."

With things the way they are, there are arguments that the management of native speaking instructors needs to be strengthened. 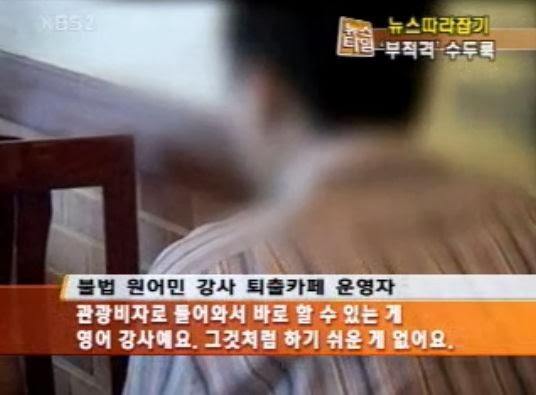 Manager of the internet cafe to expel illegal native speaking instructors: "There are English instructors who came to Korea on a tourist visa to work. Things like that are not easy. First, strong legal regulations are needed to punish them, and it's most important that they be made to include a criminal record check and health certificate when they apply for an E-2 visa." 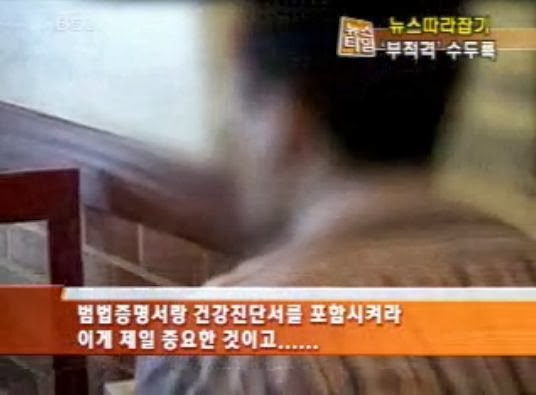 Within the English education craze, due to the prejudice that if you're a native speaker, then your [teaching] ability will unconditionally be good, unqualified native speaking instructors are able to teach with impunity.

More thorough verification is needed for them.

What becomes clear from this report that the example of the "AIDS threat email" that also appeared in the SBS report was actually printed out and displayed by police at a press conference, so they also played a role in promoting the 'AIDS threat' story. But KBS took things a step further by interviewing Lee Eun-ung of AES and amplifying his message that it was "most important that [foreign teachers] be made to include a criminal record check and health certificate when they apply for an E-2 visa", though it's not really clear what that had to do with the those teaching on tourist visas mentioned at the start of that sentence. As always, "unqualified native speaking instructors...able to teach with impunity" are described as a threat, but what made one "unqualified" was never defined. Initially AES targeted those on tourist visas, but, realizing little could be done policy-wise to control what tourists do in their spare time after entering the country, they instead turned their attention to those on E-2 visas, since they could be targeted, and KBS spread their message on the nightly news and stated "More thorough verification is needed for [E-2s]." (This would not be the last time KBS would turn to AES for quotes in anti-foreign teacher hit pieces.)
With some help from the police and major broadcasters like SBS and KBS, AES's linking of foreign teachers, AIDS, and the need to vet them with health checks had become a part of public discourse. All that was needed was some crisis that could be used to justify implementing such checks, and it was not long in coming.
Posted by matt at 11:19 PM