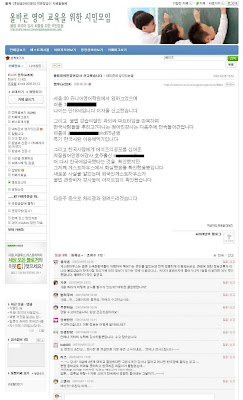 It noted tips on several foreign English teachers. Among them was 'A', from Australia, who was said to be responsible for an "AIDS scare against a Korean person" and who had re-entered the country and was staying in a guest house. As AES head Lee Eun-ung wrote in an op-ed article published by the Weekly Kyunghang in February 2009:


In spring of 2007, our group received a tip from a woman who wanted help. A teacher from Australia threatened her, saying he’d had sex without a condom in southeast Asia and she should be careful of AIDS, too. The tip also said the teacher was loitering around her place, trying to terrify her.

One result of this tip was Anti English Spectrum contacting Sports Chosun, where reporter Kim Yun-hui penned one of the more blatantly xenophobic anti-foreign English instructor articles of this time period, which was published around noon on May 27, 2007. This was followed by chosun.com and the Chosun Ilbo, where articles appeared on May 27 and 28, 2007. Getting this story into one of Korea's biggest newspapers was certainly a propaganda success for Anti English Spectrum, especially in identifying the race of the culprit:

Put on the KITA blacklist... Unfit instructors reported by [online] cafe as well 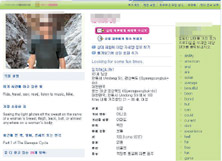 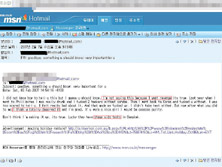 Right: Email by foreign instructor A to his ex girlfriend which threatens and describes the possibility of AIDS infection.

People have been shocked as the perverted acts taken too far by white foreign instructors have become known.

It's been revealed that some white foreign instructors use the fact that Korean women are enthusiastic to study English, and that they are preferred to black instructors, to compulsively commit molestation and harassment.

A Korean woman, Ms. Kim (31). recently met Australian native speaker instructor "A" (30) at a friend's birthday party and entered into a romantic relationship with him. However she became frightened by A's excessive obsession and crippled appearance and soon told him she was breaking up with him.

The vindictive A realized that he might be infected with AIDS and forced Kim to have sex with him. On February 7 he sent her an e-mail saying, "Last year in the Philippines I was drunk and had sex with two girls without a condom. After that I came to Korea and had sex with you without a condom. I was too scared to tell you. I feel sorry about it. I didn't even get (AIDS) tested. When I think about what you did to me (breaking up), however, I feel very satisfied. If you were nice, I would feel guilty. I'm not making this up, it's all true. I'm lucky I can get a cheap AIDS test in Bangkok."

KITA (the Korean Native Speaking Instructor Recruiting Association) put A on the blacklist on its homepage and warned that he was "A person who often puts his hand on students' bodies. It reaches the level of molestation, so absolutely do not hire him. He was fired due to the strong complaints of students and parents." However, it is known that A is currently working at a hagwon in Seoul's Hyehwa-dong.

As well, in Masan, Gyeongsangnam-do, American instructor “B” (40), who has been working at an English hagwon and an elementary school for one year, has been accused of harassing Korean women while pretending to be unmarried despite being married with four children. The victimized women, fearful of retaliation, all refused to be interviewed but gave this evaluation of B: "He has a very disordered private life, always drinking and sleeping with groups of women, and cannot be a role model for elementary school students.”

At P High School in the U.S., where B worked in 2005, he was fired for molesting a 17-year old female student. A student from that school, K, attested that, "At a pep rally a female student hit him in the face with a pie, and B grabbed her waist and rubbed his face between her breasts. Then he was fired."

Another instructor, T (43), who lives in Andong, came under fire by netizens for introducing himself on a chatting site by writing on his profile that his "favorite thing" was "looking at the glistening sweat on the curves of a woman's breasts, thighs, back and ass." As well, under "What you like to do in your free time," instructor T wrote, "sex."

Ms. Hong (28), who works as an English instructor in Busan, said, "90% of the native speakers are white. This is the result of Korean people's racist tendencies and the greed of hagwons who try to improve their image." "White instructors tend to think that 'it's easy to fool Korean women who approach me to learn English (It's easy to have sex with them).'"

Citizens infuriated by the explicitly sexual remarks and molestation of such white foreign instructors have started a voluntary movement to improve things. A portal cafe with 14,419 members (Anti-English Spectrum, cafe.naver.com/englishpectrum.cafe) is actively carrying out a "citizen"s movement to expel illegal foreign language instructors" by reporting unfit foreign instructors and holding joint investigations with police. Cafe manager Lee (ID 엠투 (M2)) said, "This year, too, we are concentrating on making an issue of, and informing [the public about], low, lascivious, unfit native speaking instructors."

The email in question is here: 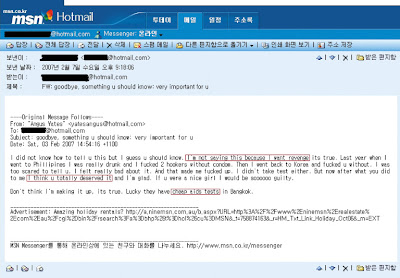 Twelve hours later, in the early morning of May 28, 2007, the Chosun Ibo published the following article:

Some native speaking instructors who habitually molest or sexually harrass Korean women are arousing criticism. Last year Ms. Kim (31) met Australian native speaker instructor Y (30) at a friend's birthday party and dated him. However a few months later she told him she was breaking up with him. But in February Ms. Kim received an email which said "Last year in the Philippines I had sex with two girls without a condom. After that I came to Korea and had sex with you without a condom. I was too scared to tell you. I feel sorry about it. [See photo.] He said, "I didn't  get  an (AIDS) test. When I consider what you did to me (breaking up), [I think] you deserve to get AIDS. Therefore I'm safisfied. I'm not making this up, it's all true."

Korea Foreign Teacher Recruiting Association (KFTRA) put Y on their blacklist. On this blacklist are the names of 68 poor foreign instructors who have been reported for things like sexual harassment or contract breaches. It says of Y, "He often puts his hands on students' bodies. It reaches the level of molestation, so absolutely do not hire him."

The KFTRA said that currently, of the 20,000 to 30,000 foreign instructors working in our country, approximately 10 percent of them had been fired due to serious problems such as molestation or refusing to teach classes.

And just before noon on May 28, the Chosun Ilbo's English-language site posted this article:

Allegations of improper conduct against expatriate English instructors in Korea refuse to go away. The Korea Foreign Teacher Recruiting Association estimates that about 10 percent of the 20,000-30,000 foreign instructors working here are fired after they were found to have committed sexual improprieties or refused to teach classes.

It cites the case of a Korean woman identified as Kim who says she met an English instructor from Australia at a friend's birthday party. Kim went out with him for several months. When she broke up with him, the Australian sent her an e-mail in February saying he had had sex with two prostitutes in the Philippines without using condoms in 2006 and Kim had been his next date. He said he was so afraid that he could not tell her about it, and had not had an HIV test. The instructor said Kim "deserved" to get AIDS considering what she did to him.

The KFTRA has added the instructor to a blacklist of 68 foreign instructors accused of sexual harassment and contract breaches. The association told institutes not to hire the Australian.

In an earlier case, an American instructor who worked in a high school in Yongin made headlines when he was fired for teaching students how to smoke marihuana and said Japanese women "are the best."

That article translates in the nicest way the above Chosun Ilbo article, and adds the last paragraph in for good measure.
The teachers blacklist in question at the website of Korea Foreign Teacher Recruitment Association (KFTRA) was reported on by the Korea Times on August 26, 2006. As the article notes, posting the instructors' names online in that manner made the association vulnerable to libel suits.
In the interest of fairness, a blogger at this time contacted the (clearly visible) sender of the email and got these responses:


(Email 1)
The whole thing was extremely unfair. I was just the victim of a vindictive, venegeful Korean woman. I would sue, but this is Korea. Please also mention her name, ***, and the fact that she has slept with every man in Itaewon. She was cheating on me, not the other way round. She loves hurting men. I regret ever meeting her. Your help would be appreciated.
(Email 2)
As this whole thing is so blatantly unfair, make sure you mention her name,***, mine was exsposed, why shouldn’t hers. And the sneakly, manipulative nature of the girl. You have no idea how cruel she is. She’s evil. I know, I lived with her for 3 months. She loves hurting men, I could never work out why. She even had an ex canadian boyfriend put in jail for hash. She knew he had some in his appartment and when he cheated on her, she called the police. This is not a nice girl we’re talking about. Just let the truth be known for justice’s sake.

While commentary on English-language blogs and forums at the time found little sympathy for the writer of the email(s), there was a great deal of criticism directed at the Chosun Ilbo for focusing on its author's race and for hiding the recipient's name but not the sender's.
While these articles garnered a fair amount of publicity for Anti-English Spectrum's campaign to portray foreign teachers as AIDS threats, their true success would come a month later when A was arrested and major TV networks aired the "AIDS threat email" on the evening news.
Posted by matt at 4:13 PM