Drug arrests, the case of Christopher Paul Neil, and AES's invitation to an Immigration policy meeting

On August 31, 2007, Seoul Police announced that Americans on E-2 visas teaching at a well-known language academy in Gangnam had been arrested for habitually smoking marijuana, with five charged and five more about to be. By September 4 the number being investigated jumped to 23, with most of these reported to be English teachers.

The Kyonghyang Shinmun argued that this was all a part of a pattern of foreign teacher behavior, and described some of the actions being taken to control it.

Cases of drug use by foreign instructors are never ending. In March of this year, the Seoul Central District Prosecutors' Office arrested five former and current native speaking instructors for using and selling marijuana, and in June, the Daejeon District Prosecutor's Office caught a male Australian instructor and a female Canadian instructor. In July, a Canadian instructor from Busan was caught by a customs officer after bringing in marijuana via international mail.
There are also growing calls for the government to step in and weed out unfit instructors. Nineteen National Assembly members, including lawmaker Shin Hak-yong, proposed a “Special bill for the promotion of English education” in March this year, under which the government would manage the qualifications and recruitment of native speaking assistant teachers, but it is currently pending in the National Assembly. The 10,000 members of the 'Anti English Spectrum' cafe, which aims to expel unfit English teachers, argue as well that E-2 visas should require criminal record checks and medical certificates to check for drug use, and are collecting reports of the harm caused by unfit native speaking instructors.

Once again, AES was being quoted pushing health checks for E-2 visa holders.
On September 5, the KBS news show In-Depth 60 Minutes [추적 60분] broadcast a report on English teachers which highlighted drug use, forged diplomas bought in Southeast Asia, and the case of John Mark Carr. Falling into the same category as this report from two years earlier, it claimed “about half of native speaking instructors are unqualified” and highlighted the need for improvement in the visa issuance system.
The same day, NoCut News posted an article (translated here) titled "Korea is a ‘depraved paradise’ for foreign English teachers" that quoted an officer with the Seoul police department’s foreign affairs division as saying of foreign English instructors that "the majority of them find it easy to seduce Korean women who want to learn English and do drugs with them."
It was amid this negativity directed at foreign teachers and growing clamor for stronger visa regulations that the case of Christopher Paul Neil came to light.
On October 8, 2007, “INTERPOL launched its public appeal to identify an unknown man photographed sexually abusing young Southeast Asian boys in images which had been posted to the Internet.” Within days, number of people contacted INTERPOL and identified the man in the photo as Canadian Christopher Paul Neil, who was then teaching English at Kwangju International School. Among those that reported him was a former coworker, a foreign teacher who posted photos of him at Dave's ESL Cafe, where posters agreed her former coworker looked similar. (More on how the investigation was carried out can be watched in a BBC documentary (Part 1, 2, 3)).
By the time he was identified, Neil had fled Korea for Thailand, where he arrived September 11 and was caught September 19. Though Neil was not on an E-2 visa (rather, an E-7), had no criminal record or known history of drug use, nor had he committed his crimes in Korea, the news that yet another pedophile had taught in Korea led to ever greater concern surrounding foreign English teachers. A number of newspapers published editorials about the case (two are translated here). On October 18, the Seoul Sinmun published the following editorial:

[Editorial] The child molester was a native speaker teacher?
It was revealed that a child molester wanted by Interpol, about whom information was shared around the world, stayed in Korea for more than four years and served as a native-speaking teacher or English instructor at various schools and hagwons. It is terrifying to think that this heinous sex offender, who took pictures of himself sexually harassing about 10 Cambodian and Vietnamese boys aged 6 to their early teens and posted them on the Internet, has lived a life in which he constantly encountered children and teenagers in Korea. In August of last year, it was revealed that a man in his 40s who made headlines in the US as a suspect in the rape and murder of Little Miss Colorado had also worked as an English instructor in Korea. Korea has been a "dupe" for a long time, allowing foreigners who speak English to get jobs easily and treating them well, but with this, we really can’t help but worry whether Korea will become a "paradise for criminals from English speaking nations."
The reason why even criminals thrive in Korea is because the supply and demand for native-speaking English teachers is not balanced. The enthusiasm for English learning is so overheated that it is even called a "frenzy," but, as there is a huge shortage of native-speaking teachers, foreigners who have not been verified are indiscriminately hired. According to the data released yesterday by National Assembly Representative Min Byeong-du of the United New Party, 106 out of 2,970 native speaking teachers working in elementary, middle, and high schools do not have a bachelor's degree. With the schools being in this state, we can guess what the scene in hagwons would be like.
Currently, the Ministry of Education, local Offices of Education, and individual schools (private schools) are in charge of verifying native speaking teachers when they are hired. Groundbreaking supplementary institutional measures such as unifying verification agencies and training verification experts should be prepared as soon as possible.

The Joongang Ilbo opened its editorial with the following paragraph:

The insecurity of school parents concerning native speaker teachers and instructors is growing by the day. This is because the teachers’ shameless crimes are growing. Just a couple of days ago, a Canadian wanted by Interpol for sexually molesting small children in Southeast Asia fled abroad after working as an English teacher in Korea as police moved in for the arrest. A while back, there were incidents of a teacher molesting children and a group of teachers smoking marijuana. There must be even more crimes that have yet to be revealed. It’s time to hurry and formulate measures. 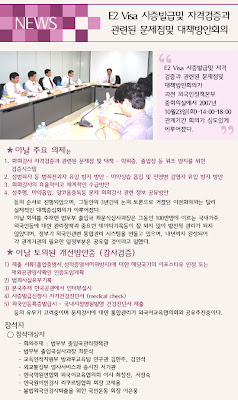 Here's the post he put up at Anti-English Spectrum right after the meeting:

As Lee described it, he


emphasized that health check reports, [and] criminal offense reports should be included in documents required when native speaker teachers enter the country. Related organizations expressed agreement and said that these would be reflected in policies.

The government wasted no time in attempting to legislate these policy changes. On October 24, 2007, the very next day after the immigration policy meeting to which Lee Eun-ung had been invited, the following bill (number 7642) was submitted to the National Assembly by ruling party representative Shin Hak-yong:

Nowadays, the number of foreigners working in Korea is increasing, but a good many have previous convictions for drug and sexual crimes or carry infectious diseases. As we require measures to deal with the threat they pose to our society’s public order and our people’s health, we herein prepare the legal basis to require that foreigners applying for an employment visa submit a criminal background check and a health certificate.

If a foreigner who intends to enter the country for the purpose of employment applies for a visa, the foreigner may be required to submit a criminal record inquiry and a health examination certificate issued by their home country (newly established Article 8 (3)).

Partial Amendment to the Immigration Act

Part of the Immigration Act is amended as follows.

③ When a foreigner who wants to enter the country for the purpose of employment applies for a visa, the foreigner may be asked to submit a criminal record inquiry and a health examination certificate issued by the country they to which they belong.

This Act shall come into force from the date of promulgation.

Getting invited to the policy meeting clearly shows how successful AES's media campaign had been, and though Lee didn't make it clear in the above post at AES's site (nor is it clear in the language of the bill), the health check reports would ultimately include tests for HIV. While criminal record checks should long have been included in visa regulations, and enough teachers had been arrested for marijuana to not make the drug test requirement particularly surprising, all of the negative articles connecting English teachers with AIDS were the result of efforts by Anti-English Spectrum, so the inclusion of HIV tests in the new E-2 visa requirements was no doubt seen as a victory.
Anti-English Spectrum's campaign against the phantom menace of foreign English teachers with AIDS, carried forward on the internet, in the media, in petitions to government agencies, and finally at the meeting which decided the new E-2 visa policy, had succeeded, and the fruits of its members' efforts would become clear when the government announced the policy days later.
Posted by matt at 4:42 PM