Controversy over the Gwangju Uprising

Today is the 33rd anniversary of the crushing of the Gwangju Uprising. On this day in 1980, ROK special forces units retook the city from its citizens, who had held it for six days after forcing the military out on May 21. 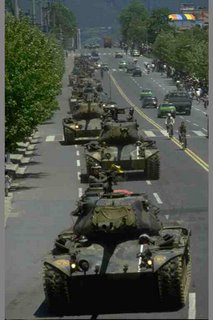 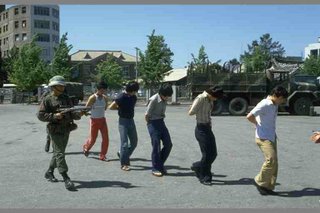 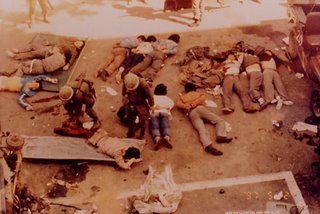 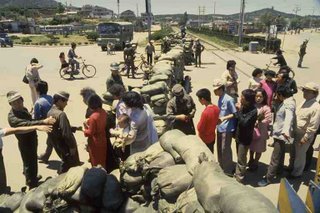 More photos of that day can be found in this post (and film of the aftermath of the battle that day is shown in the first two minutes of the 1996 film 'A Petal,' which can be seen here. I've written quite a few posts about the uprising, including a brief timeline, the violence on the first day, the escalation of violence over the first three days, forcing the military out of the city, as well as an analysis of US news reports from May 22 and the death toll.

I've also looked at more personal stories related to the uprising, such as the memories of a nurse, the memories of a photographer, and the story of a soldier. The single post I'm happiest with is likely this one, about the death and memorialization of a high school girl named Park Geum-hui who was killed during the uprising.

A bibliography of books in English about the uprising is here, and I've also looked at the background of the situation in 1979 leading up to Park's assassination and Chun Doo-hwan's 12.12 coup, both of which, essentially, led to the uprising.

The big new this year was that two right wing TV networks interviewed North Korean defectors who claim the Gwangju Uprising was the work of North Korean special forces. This created quite a reaction, as a Joongang Ilbo article titled "TV shows tarnish Gwangju history" describes:


After the programs were broadcast, roughly 17,000 comments were posted on Ilbe, a far-right online Web site that many young people visit, denouncing the May 18 uprising. [...]

Most users ridiculed the activists and the victims of the uprising, by describing them as hongeo, or Korean name of skate, a fish and regional specialty of the South Jeolla region. The fish is red in color and is often used as a nickname for South Jeolla people when accusing them of being a “commie,” or “red.”

Politicians and civic activists protested the programs and the comments of the Ilbe Web site.

You Seung-hee, a Democratic Party lawmaker, issued a statement on Sunday saying: “The actions of the so-called general-programming cable channels, distorting the history of the protest against the military coup, which is part of the identity of South Korea, are no different than the acts of Japan that distort history [regarding their colonial rule during World War II and territorial claims].”

Kim Si-won, an 18-year-old high school student, also staged a one-man protest in central Seoul. “The Ilbe members, who deny the spirit of the May 18 Democratization Movement, are not entitled to be citizens of this country.”

Kim Seo-jung, a media studies professor at Sungkonghoe University, said “[TV Chosun and Channel A] just ran the programs to get ratings without checking the facts about the Gwangju uprising, which is an important incident in Korean society. They failed to keep their responsibility as media for uncovering the truth.”

Imagine that. The Donga Ilbo - owner of Channel A - has an editorial in English which attempts to deflect blame, saying "some TV programs and Internet sites aroused disputes by arguing that North Korean soldiers intervened the uprising [after a] North Korean defector appeared on a TV program last week". Cute. [The article is worth reading, however.] I'm not sure if this is really necessary, however:


“It is a serious misdeed that some television programs deliberately distorted the truth of the May 18 uprising,” Oh Jae-yiel, head of the May 18 Memorial Foundation, said on Sunday. “After evaluating the response from the government, we will take all available legal action.”

This Donga Ilbo article also describes battles between leftists and rightists (or 'May 18 deniers') to have the uprising memorialized by UNESCO. It also mentions that


UNESCO agreed to publish a world human rights textbook, which will feature 10 cases, including records on France`s 1789 Declaration of the Rights of Man, Germany`s dismantlement of the Berlin Wall, Poland`s 21 Demands of Gdansk, and documentations on the May 18 incident. The first of its kind, the human rights textbook will be used as reference material for students worldwide.

The Joongang Daily describes the content of the shows, which "featured interviewees that said North Korean agents secretly penetrated into the South in 1980 and pretended to be civilians in order to cause social turmoil and the collapse of the government in the South."


TV Chosun broadcast a talk show on May 13 featuring a North Korean defector, identified as Im Cheon-yong. Im said he was a former North Korean military officer of a special force unit that was involved in the Gwangju uprising in 1980.

“A battalion composed of 600 North Korean soldiers penetrated into [Gwangju],” Im said. “It was North Korean guerillas who occupied the South Jeolla Provincial Office at the time.”

Another North Korean defector then appeared on Channel A last Wednesday and made a similar claim. The defector, who used the pseudonym Kim Myeong-guk, said he was one of several North Korean soldiers sent to Gwangju during the uprising. Unlike Im, his face was blurred, apparently to protect his identity.

“On May 21, 1980, soldiers of the special forces unit arrived on shore near Gwangju by ship,” Kim said. “We pretended to be Gwangju civilian forces and even attacked the South’s government forces together.

“Among the North Korean soldiers who participated in the uprising, some were promoted to be generals in the North later,” he said.

As the Joongang mentions,


The allegation that North Korea was possibly involved in the Gwangju movement was first raised by the Chun Doo Hwan administration in 1980.

On May 21, 1980, Lee Hui-sung, then-Army Chief of Staff for the Chun administration, spread leaflets that said, “The agitation is being led by [North Korean] spy agents and rebellious gangsters.”

However, in 1995, during questioning by the prosecution, Lee reversed his words, saying, “At the time, that allegation was just a suspicion. It was a bit exaggerated.”

Many military experts also say that the possibility of North Korean agents’ involvement is highly unlikely, as Gwangju was under thorough military surveillance by martial law at the time.

If Martial Law Command believed North Koreans had organized the rebellion, they certainly didn't let on in the statement they made to citizens 33 years ago after special forces secured the city:


The military has waited patiently ever since evacuating the city on May 21. We promised the citizens' representatives not to come back in, provided certain conditions were respected. They were not respected. Coming back into the city became inevitable, because the scum of society and criminal elements organized as so-called "citizens' army". They broke the law. The army has completed its mission successfully. Citizens, come forward. Order has been restored.

As the Korean notes in his post at the Marmot's Hole, even conservative pundit Cho Gap-je called the assertions made on the program unbelievable. Apparently, Cho was there (something I didn't know) as a journalist, and he notes that no journalists, Korean or foreign, or citizens, ever spoke of North Koreans being in the city. He also notes that only 23 soldiers died during the uprising (13 of those in friendly fire incidents), and argues that, had North Korean special forces been involved, surely more soldiers would have died.

The aforementioned battle over UNESCO memorialization of 518 also mentions that


some conservative groups in South Korea suggested that “The May 18 Gwangju incident was an armed revolt triggered by some 600 special forces from North Korea. Those who massacred Gwangju citizens are North Korean soldiers, not South Korean martial troops.

So it wasn't the ROK army who killed civilians in Gwangju, it was DPRK soldiers. Welcome to cuckooland, everyone.

If we remember this -


“On May 21, 1980, soldiers of the special forces unit arrived on shore near Gwangju by ship,” Kim said. “We pretended to be Gwangju civilian forces and even attacked the South’s government forces together.

- by May 21 the die had been cast, so to speak, regarding the uprising. Arguably the one of the most radical citizen actions - mass action by taxi and bus drivers who drove downtown, occupied city space and made it much more difficult for the special forces to control the streets - took place on the evening of May 20. In fact, even before citizens armed themselves after ROK special forces opened fire on crowds in front of the Provincial Hall on May 21, a civilian rebellion was already taking place, which I looked at in detail here. In that post I quote paratrooper Kim Yong-jin:


While advancing, a major, an operations staff member of the 3rd Brigade, held up a gun shouting: "I will shoot you to death if you retreat," so that we reached the area near Kwangju Station in terror. When we arrived at Kwangju station, soldiers were standing in a single line in front of the train station building, shooting ceaselessly, and near the fountain buses and trucks carrying citizens had driven into the fountain while charging at the soldiers. One sergeant, a vehicle driver of the 3rd Airborne Brigade, died after being run over by a truck, and about 20 citizens were abandoned near the fountain, drenched in blood.

By the night of the 20th, citizens were charging at special forces lines with vehicles, and, in the case of the confrontation in front of Gwangju Station, opening fire on citizens. As I described in the aforementioned post:


Many of the demonstrators that had been arrested over the past three days were held in a gym at Chosun University, where they were being beaten regularly. Hearing of this, 3000 demonstrators headed to the university to free them, using buses to charge the gate. The soldiers successfully defended the university, but had to use hand grenades to do so. By daybreak the paratroopers could be found only on the two university campuses and at the provincial hall.

So, even before these 600 North Korean soldiers slipped past martial law command into Gwangju (perhaps on the back of the winged horse, Chollima?), Gwangju's citizens, without using guns, had forced the military into three strongholds throughout the city. The work of the liberating the city from the military had already almost been completed by May 21, and the military was set to exit the provincial hall (and the downtown area) before it opened fire on the crowds. If you look at the gradual progression of violence over the first three days, it shouldn't be surprising that once the military opened fire on crowds of civilians on the afternoon of May 21, the citizens would arm themselves to complete the task they had nearly finished. And as the military was forced out, I'm sure someone in power was thinking, 'Giving military training to every male over the age of twenty seemed like such a good idea at the time...'

I wouldn't call Ilbe "far-right". Maybe "far-retarded" in the best Reddit, unemployed 20 something sense. But far-right? Probably not.