With a Naver news search turning up nearly nearly 70 articles about this most recent brouhaha over English teachers, I wondered if this is simply to be expected when you mix educators and (alleged) sex crimes against children. So, let's look at coverage of similar cases in Korea over the last week.

News yesterday that a middle school teacher in Daejeon had been sentenced to two years in prison for the attempted rape of one of his students, and that a high school teacher (also in Daejeon) was fined 10 million won for repeatedly touching his student, appeared in seven reports such as this one. Worth noting, though, is that four of those reports were from local media outlets (such as Chungcheong Today, Joongdo Ilbo and DT News), and only three were from national media outlets (Yonhap, YTN, and Chosun.com). The title of the Chungcheong Today article did describe them as "teachers worse than animals," however.

More newsworthy than news of teachers being convicted for molesting underage students, it would seem, is the news that a Chungnam University Law School professor has been dismissed for touching a law school student (this story has appeared in 18 reports). So it would appear that the age of the victim has little bearing on how newsworthy a story is considered to be.

I also stumbled across this story which appeared in around 20 news reports (mostly online or sports papers) last July, which tells us this:


A criminal who broke into a one room apartment and tried to commit rape, once caught, shockingly turned out to be an elementary school teacher with a sexual perversion. [...]

Parents who learned that the perverted teacher had taught elementary school students strongly argued that "Employment screening of temporary teachers should be stricter."

The school representatives were also left scratching their heads, saying that there were no symptoms of perversion during the interview or document review. Imagine that. The former article did include this happy little image, though the case did not involve a little girl nor a giant black bird. 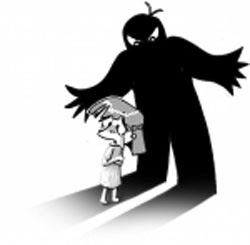 It's similar to this one in that it involves an angry shadow, but the 'two faced' English teacher's shadow is rather more demonic and threatening. 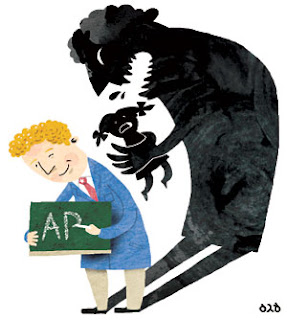 Coverage of all of the above stories together is dwarfed by the coverage of the recent foreign teacher case. It would seem alleged sex crimes by foreign teachers are more newsworthy than news of Korean teachers being convicted of, and sentenced for, sex crimes against their students. Worth noting as well is that 29 of the 70 or so reports about the foreign teacher turned up in the Naver search are television news reports (YTN makes up most of them, but all of the other networks have at least two reports), and almost all of the major newspapers covered it. Compare this to one television report on the above stories involving Korean teachers and the mostly local, online or sports paper coverage of the Korean related stories. Compare also the simple statement that "Employment screening of temporary teachers should be stricter" with the detailed reiterations of the problem of foreign criminal record checks taking into account that whole 'innocent until proven guilty' thing westerners harp on about and how it means murderers and rapists will come here and hide. (To be sure, there have been fugitive murderers from the US teaching here, and almost all of them have been Korean citizens).

While the last Korean case above had headlines talking about "Our children's PE teacher is a pervert" and spoke of the threat of the 'teacher with two faces,' the '우리 아이' (our children) tends to come out a lot more when dealing with a foreign teacher, because then it's time to circle the wagons. The most recent foreign teacher case also includes a tale of a foreign fugitive taking advantage of Korea's lax security, and is fodder for the 'endless' media reports about the weaknesses of the foreign teacher employment system. Perhaps keeping the teachers permanently confined and under watch with regular drug and HIV tests would solve the problem?* 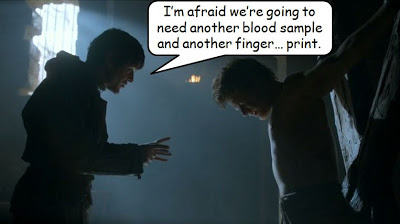 Or perhaps it could just be admitted that systems - which by their nature are inflexible - don't always work, and try to minimize the damage rather than wringing hands and bemoaning the lack of a foolproof system?

Perhaps this less-than-stellar system is worth reminding people of:

In particular, of 56 teachers who committed sex crimes against minors such as students, 20 faced disciplinary action such as suspensions, pay cuts or reprimands. [Emphasis added.]

Perhaps if the media reacted in the same way to these cases involving Korean teachers as it does when foreign teachers are arrested, this problem might have been dealt with a long time ago.


*Not being serious... just wanted to throw in the GoT reference.
Posted by matt at 11:49 PM

Still nothing in the US press about the recent alleged child molester extradictee. Whether that means the case against him in the US isn't as strong as the Korean papers make it seem I have no idea, but it's odd if you consider how much the US press, like the Korean, enjoys reporting such stories. Take the Toth extradition from Nicaragua for example.

The Korean press can be quick to run with these stories before learning all the details. I remember the John Mark Karr episode from 2006. You can still find handwringing Korean news stories decrying the fact that "child killers" like Karr could work as an English teachers in Korea even though it turned Karr hadn't actually killed anyone: http://www.webmd.com/mental-health/features/john-mark-karr-false-confession-why

Love the GOT pic.