Native speaking teacher goes AWOL... awareness that 'the North is the enemy' spreads among university students

As inter-Korean relations worsen with such things as the closing of the Gaesong Industrial Complex occurring, the increasingly hardline confrontation has even affected schools.

At an elementary school in Jeollanam-do, the native speaking teacher there suddenly returned home, leaving only a letter behind, while a survey of university students also revealed negative views of, and anxiety over, inter-Korean relations.

According to Jeollanam-do Office of Education yesterday, an American native speaking teacher working at an elementary school in Muan disappeared and left only a letter in her lodging on April 1.

The native speaking teacher came to the school intending to work from March this year to February next year, but, without notifying the school, she fled Korea via Incheon Airport on March 31.

The letter written by the native speaking teacher explained that the reason for leaving Korea so suddenly was that she was afraid of war breaking out.

The teacher's family in the US was worried about her working in Korea and urged her to return home and so she couldn't help leaving, the letter said.

The school is frustrated because it is trying to find a replacement native speaking teacher, but this is not easy in a farming village.

A school official said, "While she was afraid of war breaking out, it's also not easy for American women in their 20s to work in the countryside." "We're concerned about the children's English classes."

The Office of Education is concerned this example may spread to native speaking instructors working in other schools, but without any pointed countermeasures there's little they can do.

University students are also feeling such anxiety, a study has found.

Recently, in a liberal arts class at Chonnam National University, a survey of around 250 students titled "Perceptions of North Korea and Unification" was conducted and found that 63.4% viewed inter-Korean relations negatively.

64.2% viewed the North's nuclear tests and possession of nuclear weapons negatively, and 33.5% viewed North Korea as an enemy, more than two times higher than in the past.

Kim Jae-gi, the Chonnam University professor of Political Science and Diplomacy who conducted the survey, said "Because of things like the ending of the armistice agreement, the closing of the Gaesong Industrial Complex, and the shows of force by the North, the previous positive views of them related to cooperation, talks and aid has disappeared." "Due to concerns that war may break out, negative perceptions of North Korea have spread a great deal."

Regarding the English teacher leaving, the same thing happened at a hagwon I once worked at when the war in Iraq broke out in 2003. A teacher who had been there for more than six months fled Korea the day the war broke out. Iraq, Iran, North Korea, whatever. But hey, people abroad for the first time - and especially people in Korea for the first time - do tend to have exaggerated fears of the North, mainly due to how the western media sensationalizes things.

For example, here's how MSNBC covered the reaction to the North's first nuclear test in 2006 (quoted from this blog post from the time):


To see an example of said American TV news in action, you need only look here. In the video clip found there, from October 16, you can hear this commentary:


In one corner of the globe tonight it is a full scale crisis. North Korea has now proven to the world it is now a nuclear nation. For its neighbours, those in close missile range, that is bad news, as it is for the US government, who worry that it will become at kind of nuclear arms dealership dealing with all the wrong people. Tonight US intelligence has picked up fresh evidence they might be planning another test, on the very same day when we were able to confirm that the first test was indeed the real thing.

Today, South Korea was taking the threat seriously. In Seoul, 40 miles from the border, regularly scheduled air-raid drills today, people running for underground shelters. While in the north, Kim Jong-il's second in command told a military rally they would be victorious over the United States. 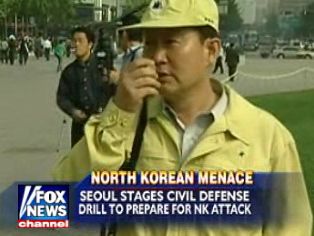 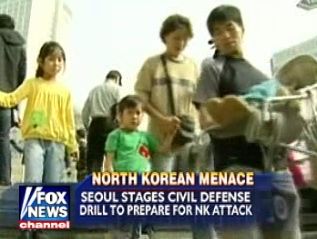 I guess MSNBC was just hoping no one would put any thought into what 'regularly scheduled' means. How can South Korea be 'taking the threat seriously' by having an air-raid drill when it's a regularly scheduled one? Ah, but no matter, all you need to do is show rapid-fire shots of people running into subways in order to make it seem very, y'know, crisis-like. Follow that by North Korea saying it will defeat the US, and everybody is off to Walmart to buy duct tape.

Needless to say, after years of reporting North Korea in this way, it's not surprising some people freak out and flee the country - it takes time before you're desensitized enough to joke, as the writers of an issue of the expat zine 'RALF report' did in 1994 (as quoted in Korea Bug) that one of the reasons to visit Korea that year was the "Front row seats to the 'sea of fire' extravaganza." And South Koreans, of course, have been living under "threat fatigue" for decades, and I'm not sure the survey mentioned in the Yonhap article above actually shows 'anxiety' taking root among students, as Yonhap insists - only that students at Chonnam U are starting to view the North more negatively (which is interesting, though 33.5% seeing them as the enemy still isn't a whole lot, despite the increase). Still, considering the lack of reaction to the Cheonan sinking (and in many ways to Yeonpyeongdo), it's progress.

At any rate, offices of education worried about teachers fleeing might want to think about trying to reassure their teachers, or distributing among them Andrei Lankov's take on it - something like that. Or, you know, they could create more 'pointed countermeasures' such as mandating ankle bracelets for them - that they don't work for sex offenders is no reason not to try! Plus it would give them a face-saving way to get rid of the HIV tests...
Posted by matt at 4:24 PM

"While she was afraid of war breaking out, it's also not easy for American women in their 20s to work in the countryside." "We're concerned about the children's English classes."

-Korea sees its first tangible sign that foreign national are in fear of war on the peninsula (albeit not totally justified), and they blame it on her vagina.

Only one? Jeez. Things are better than I thought.

The main embassies that support the majority of ESL professionals in the country could wreak havoc by advising their nationals not to stay or arrive because of NK. It would certainly be more effective than a dispassionate analysis or bulletins1586 about pay and bad hagwon owners.