[Update]
I forgot to include a link to Gord Sellar's series on Science Fiction in relation to Korea, which was pretty foolish of me since I had it in mind when I wrote this post.]

In a 1970 article by Richard Rutt (posted here) about the chapter set in Korea in Jack London's Star Rover, Rutt mentions that the Korea Times column Scouting the City (by James Wade) had mentioned a story which had appeared in Galaxy magazine that Wade thought might be the first science fiction story about Korea. I managed to to find that column, and what James Wade wrote in his weekly 'Scouting the City' column on October 10, 1970:


It's a bit late in the game to claim it as a discovery, but during the course of desultory reading we recently located what is probably the first science fiction story involving Korea. It's called "Mulligan, Come Home!" and it appeared in the February 1966 issue of Galaxy magazine.

The author is Allen Kim Lang, who elsewhere admits having done time with the military in Korea - the Kim in his name added in honor of good friends here, he says.

This story is a typical and not very memorable future tale, of the zany-romp variety we were never very fond of. A pixie-like hero is being sought all over and beyond the world for various peccadilloes. He is finally traced to Korea, where he persuades the Korean leaders, whose chauvinism has caused them to adopt French as a second language and to purchase the latest space-ship at astronomical cost as a force de frappe (this was published in the heyday of Gaullism, remember), to lend him their rocket, on the excuse that he has found prototype Silla Dynasty celadon on one of the moons of Jupiter, and can thus prove that Tangun was the son of an extraterrestrial visitor, which would extend the pedigree of Korean royalty even further back.

He takes off with the "nubile daughter" of the President of Korea (year is 2002, by the way), and that ends the Korean part of the tale. The Tangun myth is told is some detail, but - aside from the fact that Silla made no celadon - kimchi is described as containing soy sauce, and "Auld Lang Syne" is again mistaken for "the Korean chant national."

It's a first, but we can hope perhaps for better.

I enjoyed Wade's reference to "extend[ing] the pedigree of Korean royalty even further back." I also appreciate the choice of 2002 - a rather pivotal year in recent Korean history.

As for another Korea-related story, in 1953 Galaxy rejected William Tenn's story "The Liberation of Earth," (a few quotes from it are here) due to its satirical commentary on the Korean War (it was eventually published in Future Science Fiction). It doesn't specifically mention Korea, though its story of two alien races arriving on earth and destroying it in an attempt to 'liberate' it from the other side clearly refers to the Korean War.

Back to Rutt's article, I wouldn't agree with Rutt that the Star Rover is science fiction; taken on its own, the chapter about Korea is not, and neither is the concept of of the main character remembering his past lives. Even if it was, however, I found another, earlier piece of writing that could be considered science fiction while skimming through a copy of the Korea Review at the National Assembly Library the other day. It's titled "A Visit to Seoul in 1975, and was published in 1906. It shouldn't be too hard to figure out what the writer, John Mikson, was doing in Korea; here's the 9-page story: 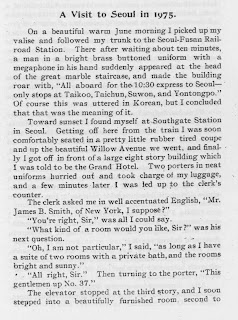 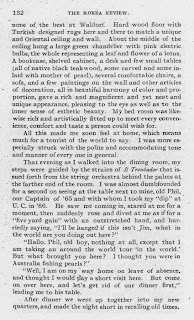 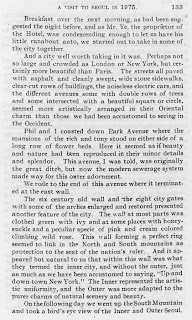 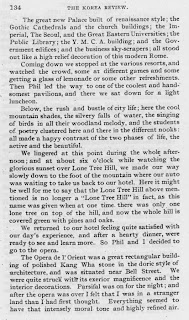 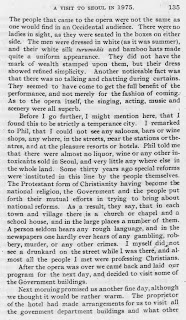 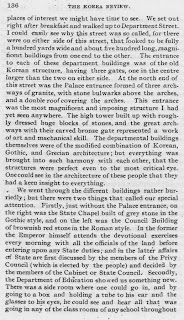 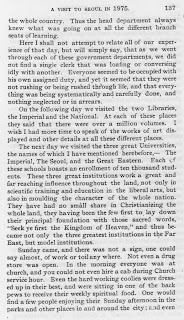 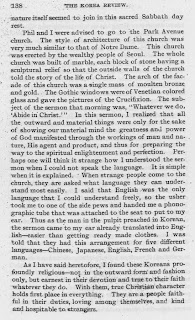 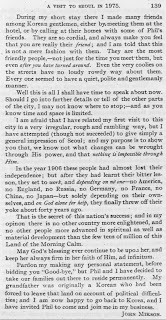 Obviously the writer was a missionary (I can find nothing else about him), and his vision of a future is of a Christian Utopia full of western style buildings, western entertainment (the opera), and enough people who speak English that he can get by just fine as a tourist, but he never conceived of the idea that Koreans would abandon their traditional clothing. I suppose one truly 'futuristic' invention that he writes about is the translator machine (so we can listen to sermons at church, of course). Still, his prediction of the city being quite western-looking, and ideas of a former sewage ditch being buried under a road were correct (especially for the actual Seoul of 1975), as, in a way, was his idea of surveillance. But other aspects, such as the absence of alcohol and the quiet audience watching an opera (see a comparison here), and the fact that Koreans liberated themselves from the colonial yoke through divine aid and their own efforts, were rather mistaken (even if he was only off by ten years in imagining when they would be liberated (1935 as opposed to 1945). He also didn't predict population growth in Korea and the urbanization which turned Seoul into a teeming metropolis.

At any rate, it's an interesting look one westerner's vision of the future for Korea. You never know what you may find when looking through old books.

Great post, for which I'll add a link in my series on SF in South Korea, but a caveat: "Mulligan, Come Home!" was probably the first original, English-language science fiction story involving Korea.

The earliest translations of SF in Korea (as in China and I think Japan) worked more like Hollywood adaptations do today, with the translators actually changing the setting and character names, the cultural background, and so on. (So the earliest SF translation into Korea, which IIRC was Jules Verne's 20,000 Leagues Under the Sea, probably qualifies as the first SF story involving Korea in the Korean language.) Also, it depends how you define SF: London's The Star Rover predates "Mulligan Come Home" by quite some time, and by modern generic definitions it probably has as much right to be considered SF as a lot of other things that today are. (A clear example of which is Kim Stanley Robinson's The Years of Rice and Salt, reincarnation and all.)

Korea has definitely turned up in more SF in English since then (besides a couple of my own stories, and Jim Munroe's transrealist Angry Young Spaceman, a book I rather disliked to be honest). David Brin has some kind of SF story about an experiment in intelligence boosting or something that I've heard about (but I don't read Brin, for reasons that constitute a rather long story). I've run across references here and there, though.

But I haven't a list or anything. One Korean SF fan I know probably could produce a more exhaustive list, though he's probably too busy with other things.

Totally not important, but "Aegukga" was originally set to the tune of Auld Lang Syne, before An Eak-Tai composed the national anthem as is sung today. So he only got the kimchi part wrong. :)

Completely forgot to add a link to your series on SF in Korea, which I intended to do since I had you in mind when I wrote the post, obviously! I've amended the post, though the list you have on your site now is not the full list. When you reviewed that Korean SF omnibus film a few months ago, I remember the list being much longer...

I hadn't known translations changed things so much, even to the point of inserting Korea into the story. Any idea when 20,000 leagues was translated into Korean?

Yes, Aegukga was originally set to the tune of Auld Lang Syne, but that changed in 1948 - almost 20 years before Mulligan Come Home was published, so you'd think he'd be aware of that fact. I first became aware of the Auld Lang Syne connection watching Samuel Fuller's 'The Steel Helmet' (1950), the first film about the Korean War. In it a soldier starts playing Auld Lang Syne on an organ and the Korean orphan who's been tagging along begins to sing...

Interesting as usual. I've always wondered about Korean sci-fi, but never really thought about Korea in sci-fi. Thanks for the post.