Giving the finger to North Korea 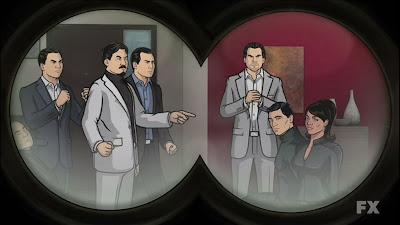 Archer describing North Korea as "the nation state equivalent of the short bus."

After telling them they won't be shot, and that they'll be taken back to "glorious people's republic of Korea," Archer responds: "Oh. Then do go ahead and shoot us... It's none of those things. It's not democratic, it's not a republic, and definitely not glorious."

After Archer says that he'll get the North Koreans' attention, the action cuts to another scene. When we return to them, Lana asks:
"Why? Why did you say that?"
"To lure them closer."
"Well, it worked."
"Yeah, they really hate the Japanese."

Later, when one of the North Koreans grabs Archer from behind, he gives him a reverse head butt and says, "And this is for the Pueblo!" Archer makes a lot of historical and cultural references; it was nice to get (most of) them in this episode.

For those who don't know, the USS Pueblo was an American Navy intelligence ship attacked and captured by North Korea in January 1968, two days after North Korean commandos tried to assassinate Park Chung-hee in a raid on the Blue House. The crew spent 11 months in captivity and were subject to torture. For a detailed look at the incident, this site I just discovered is well worth reading. My favourite page has to be 'The Digit Affair,' about how the crew discovered that the North Koreans didn't know what 'the finger' meant and used it to disrupt the propaganda photos the North was taking and distributing around the world to show the guilt of the imperialist attackers. 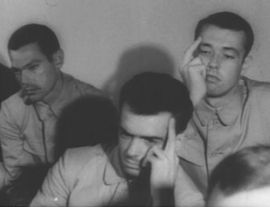 There are lots more photos. It was all well and good until Time magazine decided to print one of the photos and explain what they were doing, which let the North Koreans know what was up, and which led to a week of hell for the men.
Posted by matt at 12:05 AM