NoCut News published two more installments to their "The Reality and Twisted Values of Some White Men" series on Tuesday (and another today), all focusing on foreign instructors. The first one gives us some good news regarding changes to the hagwon law revised last year, but the NoCut News reporter wants to strangle this revision in its crib, presumably because the editor called for another negative story about white men.


'Unqualified foreign instructors' can't help but abound
[The Reality and Twisted Values of Some White Men, part 5] Why does the MOE want to push ahead with new revision [to the law]?CBS NoCut News exclusively reported on the issue of the native speaking English instructor working at a well known private university's language hagwon who secretly filmed sex with Korean women and is keeping around 20 videos.

On the 17th, the fifth article accuses the government of absurd administrative expediency in trying to relax qualification requirements for foreign instructors so much. [Editor's note]

In July of last year the Ministry of Education, Science and Technology made amendments to the Act on the Establishment and Operation of Private Teaching Institutes and Extracurricular Lessons, and on October 26 it came into effect.

According to the revised bill tabled in 2009 by Choi Young-hee, a former National Assembly Representative of the Democratic Party, when a hagwon operator hires a foreign instructor, verification was made obligatory and they are required to submit such things as a criminal record check, a health check certificate done within the last month (including drug test results) and a diploma.

Foreign instructors already working here must re-submit the three kinds of documents to confirm them again, but the rate of verification has been slow.

In this situation, with the revised bill having not even been in effect for one year, the Ministry of Education, Science and Technology (MEST) is pushing ahead with an enforcement ordinance amendment to weaken the 'foreign instructor qualification' verification.

A MEST official revealed, "We are pushing ahead with an enforcement ordinance amendment which will omit the criminal record check and degree check for instructors who have been issued an E-2 conversation instruction visa." "Currently the Office of Legislation is reviewing it."

This official said, "Because E-2 visa holders have already been verified by the immigration office, we see no need for it to be done twice." "We received complaints from hagwons about the amount of time and cost involved, as well as a flood of official requests from businesses (for an amendment omitting the material)."

◈ The ease of faking diplomas makes the revision problematic

However, if MEST's plan for revision through the enforcement ordinance comes to pass, problems may arise.

From the beginning, the purpose of the bill was to stop those attending hagwon lectures from being harmed by criminals working in hagwons as the demand for foreign instructors in Korea increased.

However, in a situation in which diplomas can be easily faked, if the enforcement ordinance affecting the safety system is passed, it's possible things could return to state in which students could be harmed.

In fact, last year an overseas Korean caught by the police who faked an American degree not only posed as an English instructor, but also taught openly while hiding a criminal record in which he'd served time for second degree murder.

The police investigation found that Mr. Kim had easily faked a diploma from a well known university by using an American search site and spending only one or two hundred dollars.

In these circumstances, in the name of MEST's administrative expediency and due to the clamor of hagwon operators, the likelihood of wavering from the original purpose of a bill revised with difficulty gets larger and larger.

It's good to see the government is moving ahead to get rid of the ridiculous requirement for submitting documents to both the MOJ and MEST, and especially of the need to re-submit documents for those who are already here. NoCut News was reporting even back in December that the drug tests weren't being implemented for foreign hagwon teachers (see the article "A stoned native speaking instructor and my child...?!"), and, along with other media outlets like Newsis (which reported "Only 1 out of 10 foreign instructors in Seoul hagwons are verified"), ignored the fact that all foreign hagwon teachers on E-2 visas had already submitted these documents. But hey, when you're trying to exploit traditional fears of foreigners among the public, facts like these are of little interest. And I suppose this is not the time to point out that the claims made in Choi Young-hee's original bill, such saying that it was needed due to rising foreign teacher crime, were unsupported by the statistics her office had.

The article also pushes the idea that if these documents aren't submitted twice degree forgers will be able to sneak in, which makes little sense. As well, the example they give of the overseas Korean arrested in December (when NoCut News issued this report - helpfully titled "Native speaking teachers turned out to be murderers, gangsters, rapists and kidnappers in the US") fails to mention that these instructors were deported from the US, which means they are Korean citizens, who would not be subject to E-2 visa requirements or fall under the jurisdiction of the hagwon law revision (which applies only to foreigners). Nice try, though.

Also interesting is the fact that nothing was said about removing the need to submit a drug test twice. One wonders what this will mean. In March, KBS reported that the


Ministry of Education, Science and Technology plans to confirm whether native speaking instructors working at well-known Seoul-area hagwons [are taking drugs via] a drug test when they are newly hired or when they renew their contracts, regardless of their visa status. [Emphasis added.]

So it would appear MEST may implement drug tests for foreign hagwon instructors renewing their contracts, much as SMOE/EPIK has, despite the hagwon law revision not authorizing this.

Eliminating a wasteful and unnecessary requirement (which SMOE and the MOJ seem to have done in regard to public school teachers) is a good thing, and you'd think that Koreans would prefer that their tax dollars not be spent unnecessarily. After all, a year and a half ago it was reported that "Korea has the most hard-working but least efficient workforce among the 30 OECD nations" - we wouldn't want an excuse for a latter day Jack London to come along and say something like "The Korean is the perfect type of inefficiency — of utter worthlessness," now would we? That might sound as racist as writing a ten-part series on "The Reality and Twisted Values of Some White Men."

As for this series and its calls to strengthen E-2 visa or Hagwon Law requirements, NoCut News might want to remember that these suggested measures will also target another segment of the foreign teacher population - the 46% of E-2 visa holders who are not male - that I believe 'some' Korean men are rather fond of: 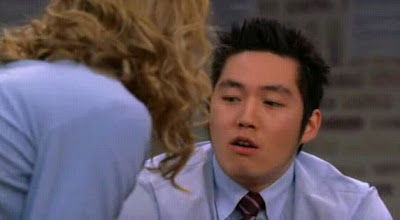