Today is Canada Day, and this year marks the 145th anniversary of Confederation. I had a chance to interview Canadian Ambassador to Korea David Chatterson last week and talk to him a bit about the Korea-Canada relationship.

One of the more prominent images - especially keeping this recent story in mind - of the relationship is of Canadian veterans of the Korean War returning to Korea, so I asked him to comment on how the battle of Kapyong and other Canadian contributions are commemorated.

Describing Kapyong as the "iconic battle, the most noted battle for Canadian troops here on the peninsula," he said that Canadian troops were "thrown into the breach, so to speak, against overwhelming odds and managed to hold their ground. It was an important battle, because had our Commonwealth troops not stood, there were tens of thousands of Chinese ready to flood down that valley with nothing between them and Seoul."

"When our veterans come back, many participate [in the commemorations of the battle], and when they go there, you can see it in their eyes, 60 years later, they still remember the heights of land and the valley… So it’s very emotional.

"When we have these revisits, and our veterans come back, they do a variety of things. They go to the national cemetery, to the UN cemetery in Busan, Kapyong, the war museum, and for most of them it’s the first time they’ve back in 60 years, so they’re amazed at what they see, given that 60 years ago the country was in ruins.

I asked about the repatriation of Archibald Hearsey's remains, and he said, "That was really quite dramatic. His dying wish was to buried with his brother, whom he’d been separated from for 60 years." 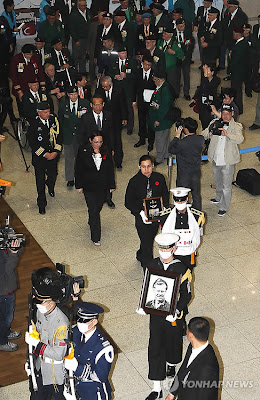 (From Yonhap)
Commenting on the return of Hearsey's ashes, accompanied by his daughter, grandson and a group of veterans, he said, "His daughter was spectacular, she really did a fantastic job, and the spotlight was very much on her. The Ministry of Patriots and Veterans Affairs did a great job – they very much supported this, in particular the Minister – they received the ashes at Incheon Airport and temporarily laid them to rest at the National Cemetery, which is quite an honour, and then the next day we went down to Busan and interred the ashes."

More on their visit can be found in this speech by Canadian Senator Yonah Martin (she met them during a layover in Vancouver on their way to Korea). The Ambassador also noted that KBS had filmed a documentary about the Hearsey brothers that aired June 24. That documentary can be seen here.

Asked about the number of veterans who return every year, he said that it varies between 50 and 100. "Next year will be the 60 year anniversary of the armistice, we’ll probably see in the neighbourhood of 100. But they’re getting old. [At the time] a great number of them were 18 or 19 years old, very young, first time volunteers. The youngest might be 78. There’s few of them around, and it gets more difficult. In fact one of the veterans who came to visit died just about a week after he returned to Canada."

I was curious if Canadian veterans returned at other times of year to commemorate events other than Kapyong, and he said that at other times of year, such as the anniversary of the outbreak of hostilities or the signing of the armistice, a cross section of veterans from different countries are brought over, so there are usually Canadians veterans who come, not just for Kapyong but for other anniversaries as well. He reiterated that "It’s really with the support of the Ministry of Patriots and Veterans Affairs. They make that possible."

He also described another way the war is remembered which I wasn't familiar with: "November 11 is our Remembrance Day, the armistice day of the First World War, and Korean War veterans came up with the idea of turning towards Busan at 11 am on the 11th. Everyone takes a few minutes and turns toward Busan. It’s a way to keep the memories alive."

I also asked about how Francis Schofield is remembered in Korea. 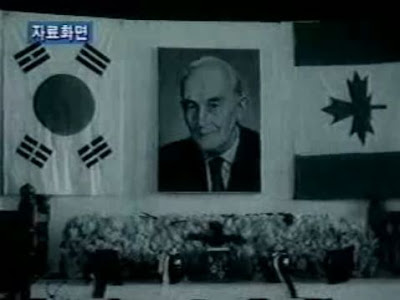 Scene from the April 1970 state funeral for Dr. Schofield.
"The Schofield Memorial Society has a commemoration, as he’s buried at the National Cemetery as well, and they quite often have readings and they're very committed and have very strong memories, fond memories of Dr. Schofield and his contributions to Korea. Quite often I’ll mention his name and people will go "Oh yeah," and start telling a story they've heard or that they're directly related to."

He also mentioned that former Prime Minister Chung Un-chan was assisted by Dr. Schofield in his middle school studies. "In those days you had to pay money to go to school and Dr. Schofield supported him in his studies, and 40 years later he became prime minister." 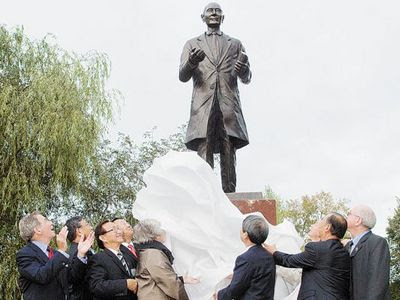 Statue of Francis Schofield at the Toronto Zoo
"He was just back in Canada for the Schofield memorial which was constructed at the Toronto Zoo – it’s huge, it’s quite astounding. He went there for the dedication. He threw out a pitch at a Blue Jays game – it was quite a successful visit." 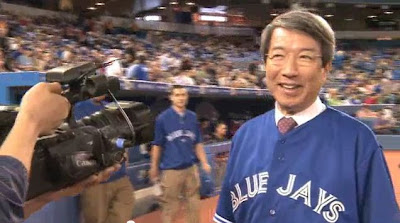 Former Prime Minster Chung Un-chan after throwing the opening pitch at a Blue Jays game. From the video below.

The former Prime Minister also visited Toronto in 2010 in relation to the statue and the surrounding Korean garden built at the zoo. Senator Yonah Martin also brought up Dr. Schofield in a recent speech (her other speeches, some of which are related to the Korean-Canadian relationship, can be seen here).

Also, with the recent news that negotiations would re-start for the Korea Canada Free Trade Agreement, I asked the Ambassador for his thoughts on this. He noted that the two countries "haven’t actually had discussions for almost three years" but were now committed to "move forward toward a conclusion."

As for what stalled the talks, it was one sticking point: "Beef was the issue. The problem was that in 2009 Korea reopened their market to US beef and not Canadian beef, and there was no basis for that whatsoever, and it just became politically untenable to continue with the negotiations."

Korea was taken to WTO over this by Canada. "The case didn’t progress to a final decision, but we had a very strong case. The Koreans asked to come to an agreement and they reopened their market in January this year. We’ve now had several months of shipments and its going well."

Asked about who would benefit from the FTA, he said, "The benefit first and foremost goes to the consumers more than producers, because you're reducing barriers and increasing competition."

"When you look at our trade and areas of economic activity, I think our economies are pretty complimentary, as opposed to being competitive." Calling it a "win-win situation," he said, "I'm an old trade negotiator - I really do believe in this stuff."

He also laid out another benefit of the FTA:

"It focuses more attention on the relationship and I think both Canada and Korea would benefit from that. When our companies look to the growth area of northeast Asia they see China and Japan – they often don’t see Korea. Korea looks at North America and sees the bright lights of the US, but often doesn't see Canada. So this shines a light on the two countries, and it's a demonstration of a commitment on the part of the governments to that initiative."

Perhaps the agreement will reached by next year, which will mark the 50th anniversary of diplomatic relations between Korea and Canada.

I'd like to thank Ambassador Chatterson for taking time out to talk to me. Another interview with the Ambassador can be read at Busan Haps here.
Posted by matt at 9:54 PM