Drug testing for foreign teachers to include hair or random testing?

A bunch of foreign teachers yesterday were busted for pot and some synthetic drug called 2C. It's mentioned in both the Korea Herald and Joongang Daily, with the former only briefly mentioning what seems like the most interesting part of the media reports on this case (about 15 or so 30, so far). KBS reported on the bust, and the video can be watched at this link:


Native speaking instructors who have fallen into drugs... 'weak' supervision 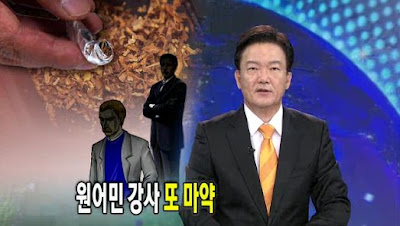 Police have once again caught a bunch of native speaking instructors who habitually took smuggled drugs.

Are there not fundamental measures which can stop the drug-related crimes of native speaking instructors who [are apt to cause problems]?

Since March, M, an American, has worked at an elementary school in Seoul.

The school was totally unaware of the fact that this instructor habitually took drugs.

School official: "He did a good job, I totally did not expect this."

The person who sold M the drugs is a language hagwon native speaking instructor.

From the end of last year until recently, this instructor often sold marijuana to a group of foreign instructors he met and received money from.

Most are kindergarten or elementary school instructors, and even took the new kind of drug 2C.

JOO (suspect accused of selling marijuana): (In the US) I got a prescription from a doctor and bought (pot), but I didn't know it was wrong to do it here." [He actually says "but that doesn't mean I'm allowed to do it here."]

In March as well a native speaking instructor working at nationally well-known hagwon was arrested for smoking marijuana by prosecutors.

Drug incidents involving native speaking instructors happen again and again but it's not easy to catch them.

This is because the drug test instructors must take when they are hired can be passed easily enough if they put their mind to it.

Urine and blood tests taken at a regular hospital can detect drugs taken within the last two weeks. After first being hired, there is no basis for testing for taking or smoking drugs. 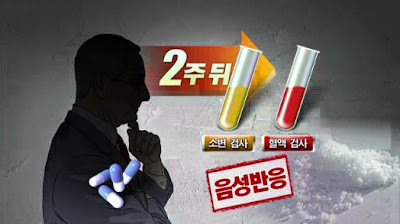 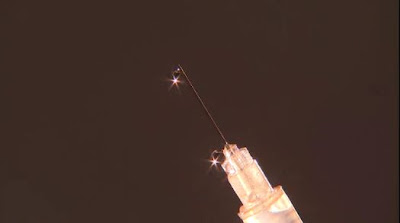 Ministry of Justice official: "To have periodic tests without evidence simply because of the risk is an excessive regulation."

Am I to take it, with that prescriptive final sentence, that parents and students feeling 'uneasy' about classes with native speaking instructors is what KBS wants? Especially with its reiteration of "again", "once again" , "again and again" in reference to foreign instructors doing drugs? At least the Ministry of Justice official is level headed: "To have periodic tests without evidence simply because of the risk is an excessive regulation." Not everyone thinks the same way, however. If we remember, a month ago foreign teachers in Busan were busted for drugs, and a KNN report had this interview:


Byeon U-cheol, head of the drug investigation division of the Busan Metropolitan Police Agency: "At places like the National Institute of Scientific Investigation, hair tests can test for drug compounds up to 3-4 months, but because native speaking teachers have a urine test, they are not [can't be] tested 3-4 days after [drug use]."

I wondered then if this was a hint that hair testing was needed (it was the first time I'd seen it mentioned). It would seem that the media and police are now taking up this idea.

MBC also did a report on the arrests: 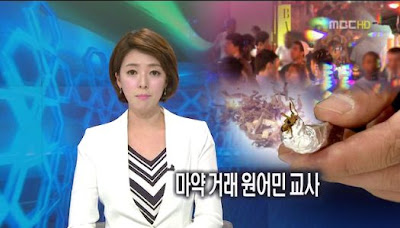 
With 23,000 native speaking instructors living in Korea, there is a need for police to strengthen the health inspection by using more definite screening such as hair testing to see whether drugs have been taken.

Starting to see a pattern here?

Many native speakers such as kindergarten and elementary school instructors and college professors have been arrested for using a loophole in the recruitment process to smuggle drugs such as marijuana and hashish and using them habitually.

Also, a Mr. Kim who runs a band rehearsal space was arrested without detention for repeatedly sharing the new kind of drug 2C with foreign club members including S.

The investigation found that much of these drugs flowed into the hands of native speaking instructors working in capital area kindergartens and elementary schools. NoCut News explained why this happened and what can be done about it:


To commit their crimes, these native speaking instructors took advantage of the fact that the drug tests they receive during the recruitment process consist only of urine and blood tests which can only detect drugs used within 1-2 weeks from the date they're taken.

A police official said, "There needs to be improvement to the system to catch native speaking instructors' drug use such as random testing or hair testing, which can detect drug use a year before they are hired."

As far as I've heard, hair testing usually only tests 3cm of hair, making it effective for detecting drug use up to three months earlier. One of the videos (can't remember if it was the KBS or MBC one) shows images of loops of hair in vials, however, so perhaps Korea is more hard core about this than in the US.

To be sure, from these three reports, some police and media are calling for further testing, though this most recent Chosun Ilbo article makes clear that of the 9 people caught in this bust, only 4 were actually foreign instructors, which is certainly not the idea you get from the other reports. It also makes MBC's formulation "With 23,000 native speaking instructors living in Korea, there is a need for police to strengthen the health inspection" a bit ridiculous; do you really need enhanced measures to deal with such a small fraction of these instructors? That sentence also seems to suggest that there are 23,000 potential criminals that need to be checked.

At any rate, last February new E-2 drug testing regulations were introduced, which included more intensified (and expensive) testing at specially designated hospitals (chosen to 'accurately determine if E2s are alcoholics or drug addicts'), and then drug testing was codified for all foreign instructors working in hagwons last June when national assembly passed an amendment to the Hagwon Law requiring all foreign instructors working in hagwons to submit criminal record checks, drug tests, and receive cultural training. These calls for even more intensified testing of foreign teachers come as the the Justice Ministry announces it will toughen criminal background checks and health rules for foreigners who want to work in Korea from August 1. It certainly sounds like the health tests are to include drug tests, so what we see now is the Justice Ministry implementing what Bill 3356 (introduced in the National Assembly in 2008, but never passed) essentially called for. At any rate, it's pretty clear that no matter what drug tests are in place, there will always be more called for, and the drug tests introduced by the MOJ in 2007 for foreign teachers - in a mere policy memo no less - have paved the way for widespread testing of foreigners in Korea.

On the bright side, this graphic is awesome... 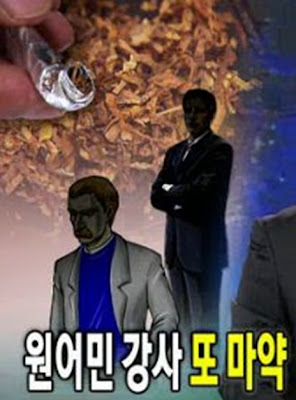 I love the moustaches on those guys in the pics :-)

All kidding aside, great posts on the weirdness in dealing with foreigners in Korea.

I thought that the Korean supreme court made a ruling that hair tests were not acceptable or something recently?

When I take a urine test in Canada, I have to pee in a cup right in front of the doctor or nurse. I can't even do it in a locked room because I could be bringing a zip-lock bag of clean urine in my pocket to use instead of my own.

Here in Korea, all my urine samples were unsupervised. If I was on drugs I could easily have brought a friend to give the sample for me.

Koreans really don't know how to do drug testing. No wonder foreigners are still doing drugs here in Korea! They are probably doing what I have just written about.

dkinsk,
That supreme court ruling was just for Koreans or inmates, those Koreans criminals in jail. native Eng. speakers need to be checked more than prisoners.
Mark,
So true, it's nice of them to have let us all cheat for so long, knock knock. Since I'm bald, if they ask me for a hair I'll pop one of my enormous blackhead ingrown butt pimples and use some tweezers to pull it out, Walla!

With the government's massive soft power push, they seem to be neglecting the fact that 23,000 people are already in Korea. Why choose to ignore these people? Instead spending huge amounts on hypothetical people interested in Korea.