[Update: The Korea Times has two stories on this.]

Yesterday Yonhap (and a dozen other outlets) published the following story: 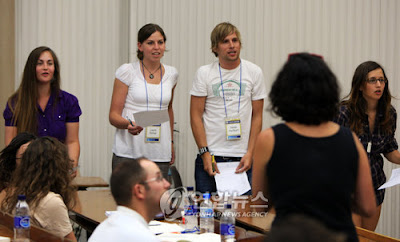 Native speaking assistant teachers receiving training (file photo)
From February next year all will be cut, only some in autonomous districts and elementary schools will remain

This year will be the last year for Seoul middle and high school native speaking assistant teachers, who will virtually disappear.

The Seoul Metropolitan Office of Education [SMOE] announced on the 30th that "Native speaking assistant teachers will operate only in elementary schools and personnel placed in city middle and high schools will be totally cut by February next year."

SMOE said by next month, except for 20-30 teachers out of 180 needed to work at Seoul International high school and at 10 English centered schools, native speaking assistant teachers will be totally removed from high schools.

Also, by February next year, except for 4 out of 260 teachers working at English centered schools, native speaking assistant teachers in middle schools will be totally cut.

Native speaking assistant teachers wanting to stay on further in Korea will be placed into elementary schools if they pass a screening evaluating their practical skills in class, their service and their development of materials.

This measure follows the argument that native speaking assistant teachers showed good results in elementary school classes which are centered on conversation, but their effectiveness fell short in middle and high schools where reading comprehension and grammar are given more weight.

Excepting 20 middle school teachers who will be retained in districts like Gangnam, SMOE plans to also cut all middle and high school assistant teachers hired by the city and districts by the end of the year.

There is no small amount of controversy over native speaking assistant teachers, who were first introduced in 1995. Conflicting opinions say they 'are not effective compared to their costs, including living expenses and airfare," or that "It's useful to have them responsible for public education conversation classes."

An SMOE official explained that, "In reality, with the Seoul Metropolitan Council having already cut the budget, it's difficult to retain them. With the increase in the number of young Korean teachers with overseas training experience, we'll see that the quality of public education will not decrease as the TEE (Teaching English in English) certification system becomes widespread.

The Joongang Daily also has more on this, including this:

Of some 1,200 foreign English teachers in the city’s elementary, middle and high schools as of February, 355 teachers were hired directly by the district office.

The numbers in the first article add up to 330 for district office and city-hired NSETs currently - I imagine that the 355 figure counts for both as well and shows that 25 have already been cut. I'm not entirely sure why the city and districts are [said to be] following SMOE - as far as I know, they didn't get their funding cut.

At any rate, none of this is really news. The budget cuts were announced back in December, and in February SMOE announced 425 high school and middle school NSETs would be cut. If there are to be more cuts by the city and districts, then the number will grow to be much larger.

The Kyunghyang Sinmun also published an article titled "Schools in chaos as native speaker English classes are cut without preparation" which looks briefly at the history of the cuts and states much of what we see above. However, it also points out worries at the abruptness of the change, the need felt by parents to turn to the private sector, and it cites the SNU study referred to here when it was released last fall. As the Kyunghyang notes, the study found that there was a need to come up with new ways to place NSETs to make them more effective, but before this could be pursued, the budget was cut. It also notes that, in fact, the study found that most of the Korean teachers who could teach class in English were actually in elementary schools, with only 18.5% of middle school English teachers and 11.0% of high school teachers able to teach in English. Nice to see the Kyunghyang doing some legwork on this.

That study, despite saying a great many things about English education in Seoul (the original is linked to here), has been cited to by SMOE to justify the cuts, as in the article above:

Or as the Joongang Daily put it:

In a poll by the Seoul Education Office last winter the majority of parents said they preferred English-speaking Korean teachers.

What's important is not what citizens think, but what the government thinks they should think. Considering the importance of English education in Korea, there really is a lot that should be said here, and lots of arguments that could be made for cutting NSETs or trying to improve their placement, but nothing is really being said at all. The government technocrats have made a decision, and the public, not having gone to extremes to put forth a point of view in the streets or in cyberspace, will not have any influence on it. Not that that's so different from a great many other countries.
Posted by matt at 2:01 PM

If I were studying Korean as a second language in high school in the US, would I want to learn it from some white guy who had lived in Daegu for a year or two, probably as a hermit with few local friends, or from a native-speaking Korean?

I would want to learn it from a native-speaking Korean, because Western and Asian cultures are sufficiently different that the cultural and communicative aspects of their respective languages are just as important to master as simple vocabulary and grammar.

The real solution to this problem is for actual native-speaking English teachers with proper qualifications to be hired, but of course Korea is not generally interested in learning or teaching English beyond a shallow, instrumentalized level, which is to say, teaching Korean students how to pass a few English-language tests and read technical English-language textbooks, but not actually have them too exposed to the "corruptions" of Western language and culture, since that might be too "risky."

After all, Korea needs a "docile" workforce that thinks in uniform, predetermined patterns, so that the chaebol and national economy can continue to accumulate wealth as efficiently as possible. Korean citizens exposed to differing, non-Korean modes of thought at a young age are obviously more difficult to control later on, and hence a threat to the powers that be.

Elementary students? Fine, we'll hold onto native-speaking teaching assistants at that level for now, since pronunciation is not unimportant for early learners and the level of discourse in the classroom is sufficiently basic not to be too much of a threat. Middle school and high school students? Well, once they've reached an age in which they can think for themselves in complex modes, we need to make sure they remain safely in the box we've created for them, and non-Korean teachers simply aren't a part of that program, are they?

This is bad news for aspiring teachers all over the world who wants to live and have a chance in Korea. Opportunities before are so plenty and gave way to a lot of chances to foreigners. Hopefully, the cut won't be so drastic.

RE:After all, Korea needs a "docile" workforce that thinks in uniform, predetermined patterns, so that the chaebol and national economy can continue to accumulate wealth as efficiently as possible.

In general, I'm afraid, I agree with you. It's a capitalistic/industrial country and what you see many times is a version of industrialized education.

We lose a surprising amount of time to "choreographed organizing" of kids each day. It's not as much about getting their attention as teaching them that being in sync with other Koreans is what's important. The medium may be the message in this case. Lot's of heavy social conditioning to say the least.

While the goosestepping of North Korean soldiers looks obviously militaristic I 'd say it looks more & more Korean than North Korean to me at this point.

My apologies for leaving this request on your blog comments. I'm a freelance journalist for Maclean's magazine in Toronto, and Mark Russell mentioned that I might like to speak to you about an article I'm writing. Can you email me at lyndsiebourgon@gmail.com?

I am an NSET and fully agree that we should be cut. What the various Boards of Education fail to see is that we are ineffective because of the education system. Hiring NSET's with Master's Degrees in English won't even help to improve the level. The real problem is this:
1)Students cannot fail. This is the biggest problem and until students learn that there are consequences for slacking in class all other measures will be futile.

2) English classes with NSET's do not affect students' grade points. Why would they bother paying attention or taking the class seriously? The short answer is that they don't.

Board of Education, wake up!!!! Your system is the problem.