So MBC broadcast a 4 minute bit of 'news' trying to scare Korean women away from foreign (read: "western") men, full of mentions of pregnancy, AIDS, theft, and flight - all tasty ingredients in a xenophobe diet. The video is posted below, but do go check out the original post here (via the Marmot's Hole), which also has a nice video of an immigration officer in Daegu explaining the E-2 visa requirements.

The clip, titled "Shocking report on the realities of relationships with foreigners" was broadcast May 28 on MBC's '세상보기 시시각각' (Seeing the World Moment by Moment), a 10 to 15 minute current affairs show which airs daily at 9:40 pm weekdays and 8:25 pm weekends (more info is here, the episode can be downloaded if you're a member here). 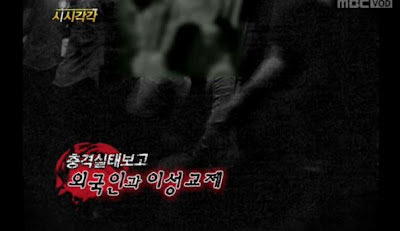 Love the font: "Shocking report on the realities of RELATIONSHIPS WITH FOREIGNERS"
Squint hard enough and you can see Kurtz mouthing "The horror."

The video was at Youtube, but was removed - it can be seen and downloaded here.
Screenshots and clearer video clips without subtitles can be found here, at a blog by someone who sounds like he belongs at AES (at least circa 2005). These screenshots might look familiar: 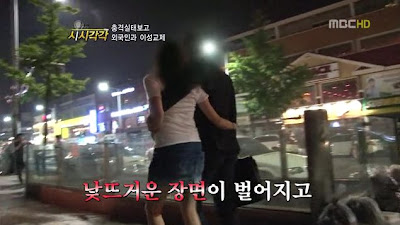 The former is reminiscent of the SBS show from 2005 which portrayed foreign teachers as drug taking child molesters and included many shots of foreigners walking arm in arm with Korean women (which the English Spectrum series will get to before long), while the latter reminds me of the opening of Sexy Mong (screenshots of which are here). This photo is also a blast from the past: 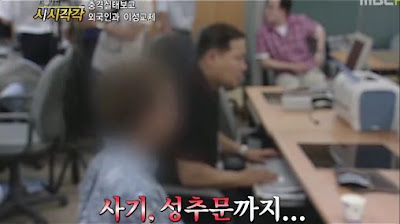 This shot is taken from this 2007 MBC news report, which this SBS report at the time makes clear is the guy who 'threatened his ex-girlfriend with AIDS.' The title of the original Korean report (translated here) was "From molestation to AIDS threats - Shocking perversion of some English teachers; Beware the 'Ugly White Teacher.'" That article - made possible by AES - is partly responsible for the E-2 HIV tests. Good times.

It seems people are thinking of organizing a protest at this facebook page, which I do quite like for its photos of happy mixed race couples, which help to put a lie to the "Look - a white man! We must flee!" moral of the MBC piece. Doing something with those photos strikes me as a better way to respond than holding a protest. If anyone other than Koreans protested, it would only lead to the circling of the wagons and 'you don't understand Korean culture' and maybe a non-apology apology. (As mentioned at Busan Haps, the piece was outsourced, not surprising considering the strike that's been going on at MBC for months). Also worth reading is this comment at the Marmot's Hole. While sure to make English teachers bristle, he makes a good point that I'll take further - during the 1988 Olympics, you had instances of mobs of Koreans chasing American athletes down the street who had to be beaten back by MPs with billy clubs, Korean crowds cheering for the Soviet Union and against the U.S., leading to some very disgusted American visitors, and yet the Seoul Olympics are generally remembered as being very successful.

More to say on xenophobia, but I'll post a related article later. Needless to say, this MBC piece helps make it clear how relevant some of the English Spectrum incident material is...
Note: There is a follow-up post here: MBC to mixed race couples: Maybe you have a guilty conscience
Posted by matt at 3:58 PM