The Joongang Ilbo had an interesting article about the history of the tear gas canister set off in the National Assembly during the FTA vote last week by DLP Rep. Kim Sun-dong:

How Kim got his hands on the tear gas canister remains to be answered, as he refused to disclose the source. Debris collected by GNP Representative Cha Myung-jin after the melee helped identify the model. The detonator was marked with the model number SY-44, which was popular with riot police suppressing antidictator demonstrations in the 1970s and 80s.

The SY-44 model tear gas canister has a notorious history in Korea. During an antidictatorship demonstration on June 9, 1987, Yonsei student Lee Han-yeol was hit on the back of his head with an SY-44 and suffered a fatal injury. Lee died on July 5, 1987, and became one of the pro-democracy movement’s martyrs and rallying figures.

It’s not confirmed that Kim used an SY-44, as the police and the manufacturer raised the possibility that his canister could have been illegally modified. The National Police Agency and Samyang Chemical said the SY-44 canisters used by police have a larger diameter than Kim’s.

A police official said yesterday that the police discontinued using the SY-44 model in the 1990s. There are 278 units stored in the police armory, and all of them are to be disposed of next year, the official said, dismissing speculation that Kim’s canister could have come from the police.

Another official said Kim could have kept it from his days as a student activist in the 1980s. The canister used by Kim had the serial number 85E805, indicating that it was produced in 1985, the source said. Kim may have kept a dud canister from a demonstration, he said.

Others have pointed out the irony of a former student activist using a riot police weapon. Just for reference, here's a video of the incident, and of Kim being dragged from the building:

For an interesting comment placing the events in the national assembly in context, see here. Meanwhile, Korea Beat reports that Kim may not face punishment for the incident.

Not that we would expect him to face jail time, but if he did he might run into the new robots which are being deployed to select prisons in a trial program to "patrol jail corridors" at night, "lifting the burden off human prison guards." One hopes they don't get mixed up with the ones deployed to classrooms to replace possible criminals. 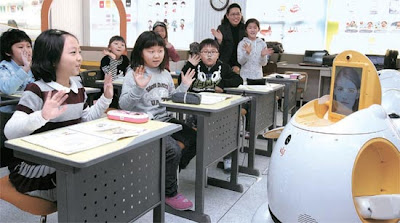 As we see above, though the children responded quickly enough to the command, "Hands up," his next command ("remove all box cutters from your pencil cases and bring them up to the front one at a time") resulted in chaos, which the robot unfortunately resolved by unveiling its 50 caliber machine gun and mowing down the class.
Posted by matt at 2:26 PM

Perhaps Korea is planning to use robots to compensate for the labor shortage that will come because of the aging population.

On the bright side, my new robot secretary never complains about getting me coffee, and won't ask for maternity leave.