According to SMOE a good deal of the debate over the budget was in regard to senior teachers and the budget for placement of native speaking teachers, which saw cuts by the education committee and was then partly restored by the special budget committee.

The education committee of the city council also cut 4.9 billion won from the budget for placement of native speaking teachers in elementary and middle schools, though [in the end] in the budget committee, the office of education's submitted budget of 31.4 billion won was cut only by 2.2 billion won down to 29.1 billion won.

According to this, next year native speaking teachers will disappear from high schools, as per SMOE's original plan, but are expected to remain at current levels in elementary and middle schools.

[A revised version of this article instead says "but are expected to remain at current levels in elementary and middle schools until at least the first half of next year," and deletes the following paragraph:]

Interesting that the above paragraph was cut. Perhaps that means there will be no supplementary budget for NSETs next summer.

As well, next year the free lunch program will be expanded to students in the first year of middle school and the Seoul City Council education committee decided SMOE would shoulder 50% of the total cost of 55.3 billion won (27.65 billion won), with the remaining 50% to be covered by Seoul City Government (30%) and each gu (city district).

The budget should be completely settled today.

Someone needs to brush up on their math. What makes the 57% figure even more ridiculous is the fact that SMOE does not fund all of the foreign teachers. I recently saw a list of the teachers in my district whose contracts were being renewed, and out of twenty, 12 were funded by SMOE, 4 by Seoul city government, and 4 by the local district office. While that's a small sample, it does at least make clear that SMOE doesn't fund all of the teachers. As for current NSET numbers, I've been told that there are currently 579 elementary school teachers, 372 middle school teachers, and 291 high school teachers, or 1242 teachers all together.

Something else I haven't seen mentioned is that last week there was a panel on English education in the Seoul school system, which is described here. 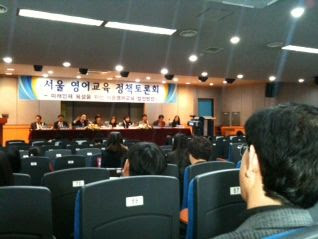 The writer of that blog, a Korean elementary school English teacher who has worked with native speaking teachers, also wrote a long opinion piece for Ohmynews (called "It's easy to be a native speaking teacher!) which calls the cuts 'welcome' and, while saying that some teachers were okay and some just came for the money (and the best only stayed for a year), concludes by asking which is more important for 'our future' - giving money to native speakers or food to children?
Posted by matt at 9:17 AM

Lol. No surprise that someone affiliated with the Korean Teachers & Education Workers' Union and the Minjok Education Research Group would argue, most disingenuously, that "It's easy to be a native speaking teacher" and come down in favor of free lunches for all over equal access to native-speaker ESL instructors.

As I argued in a previous thread, the nation trumps class in the mind of the ethno-nationalist. I'm sure lower-income students who cannot afford private English lessons at hagwons will be happy to know that they are, in effect, subsidizing the free lunches of upper-income students, since it's "all for the good of the nation" in the end.

I pity the poor students who have to endure such self-pitying, wet-blanket, whiny teachers. No wonder so many Koreans hate English!

Nice find. She also mentions, approvingly, that one teacher spent his own money to study Korean and liked Korean food, which may have offset his OK work attitude and his tendency to focus on kids who could already talk.

A friend of mine, who is the KTU rep at his school, told me the KTU's POV on the budget was that it should be spread more equally among the important subjects. I never got to delve into the topic with him fully, but he did mention that he'd heard the SMOE teacher training institute (with NSETs helping train Korean English teachers, a program my friend benefited from) is supposed to be cut, which really makes no sense, as that's a program which should really be supported.