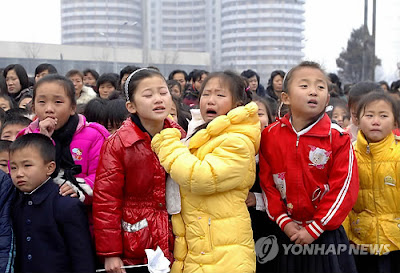 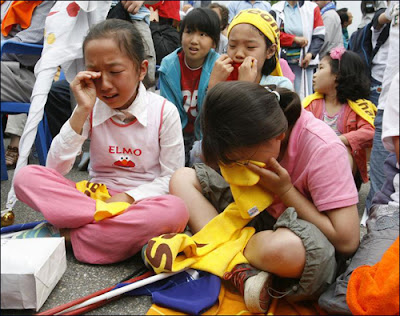 I can't help seeing the kids in the top photo and wondering if they were simply tired of standing in the cold (it's five degrees colder there than Seoul today). I'm also reminded of this story:

'Well, some years ago we were told that he was coming down to our town and that he would visit a local school. There was great excitement. The security people wouldn't exactly say when he was coming, but they told the school to go ahead and make all the preparations to greet him properly. So they did just that: they arranged a ceremony, and as one of the ways of welcoming him, they made a huge portrait of him, broken up into hundreds of pieces on the back of coloured cards. When the children held the cards up one way, they made a pretty pattern. When they turned the cards over, there was the president's face.

'The day arrived, and we were told when he would be arriving. The children were ready, everyone very nervous. Then one of the children asked permission to go to the bathroom. His teacher said that would be fine, but hurry. Well, you can guess what happened; while the boy was in the bathroom, the president arrived, and the security people wouldn't let the boy back onto the field. So the celebration went on, the children did their dances with the cards and turned this way and that, and then all together, turned them over.

'The president's face was there all right - except that it was missing a left eyebrow. The official people went crazy! The president himself didn't say anything, of course, but after the party was gone, the education department had the master in and fired him on the spot. The headmaster was in trouble. I even heard they visited the parents of the child and warned them of the consequences. And then an instruction went out. If ever there was a demonstration of loyalty like that again, the children had to be told that if they wanted to pee, they peed where they stood.

This story (reminiscent of this ad) does not take place in North Korea. It's told by a former teacher in Simon Winchester's Korea: A Walk Through the Land of Miracles, and takes place in the early 1980s in Jeolla-do; the president in question is Chun Doo-hwan. Winchester himself admits it may not be true, though other Koreans he meets elsewhere in Korea admit they've heard it.

Of course, Chun wasn't the only president who was pixelized on cards: 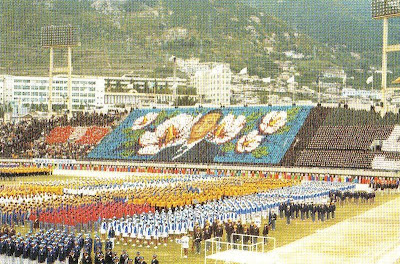 I wonder when card displays of this sort began in Korea.
Posted by matt at 3:03 PM

Ha, when I saw the videos of the "mourning" in Pyongyang, I immediately thought of your post on the subject of Pyeongchang and the, er, socially-choreographed weeping in the vicinity of TV cameras.