The Chosun Ilbo published this 'article' on December 18, which is rather similar to these 'foreign teachers, being non-Korean, could commit crimes at any time' ads passing as articles from this summer:

Significant increase after Shin Jeong-a incident
On the 8th police caught Korean Americans who had been imprisoned for violent crimes like murder and rape in, and deported from, the United States, and who had forged degrees from well known universities to work as English instructors in Korea. As there is a continuous inflow of foreign workers into Korea, cases of forged degrees are also occurring again and again. Because of this, requests to educational inquiry service providers to confirm the authenticity of degrees are increasing.

The article then rehashes the story of Shin Jeong-a and says these businesses have seen increases in business by 20% each year since her story came to light (suggesting this growth has little to do with the "continuous inflow of foreign workers into Korea"), but fails to make any other specific mentions of foreign teachers or of foreigners. Unsurprisingly, the article is an advertisement for this company, and though it reports on the arrest of the Korean Americans (who one assumes are Korean citizens, having been deported here), we're presented with this photo: 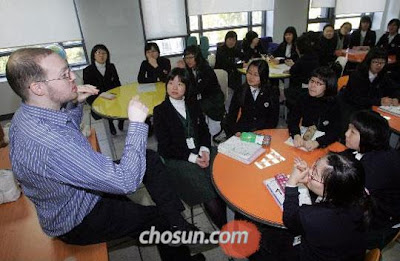 "Native speaking teacher file photo. The photo above is not related to this article."
Nice ass-covering caption.

It's interesting how looking up "원어민 위조" rather than "원어민" turned up a lot more news stories about the recent arrests (as in, 20 more), with Yonhap publishing several photos of the police displaying the former gangsters' forged diplomas: 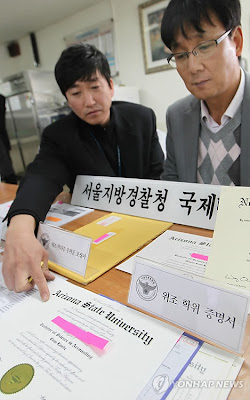 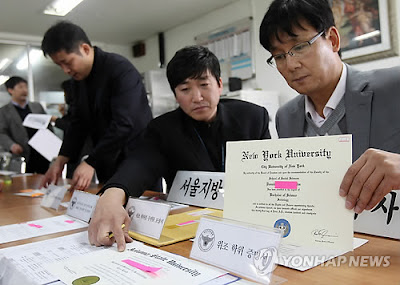 The Chosun Ilbo article begs the question, however: Are forged degrees still really a problem with foreign teachers (as in non-Korean citizens) like they were with numerous high profile arrests a few years ago (when KBS claimed that 20% of native speaking teachers had forged diplomas)?

In a September 19, 2011 Hankook Ilbo article (which crashed Firefox for me), it was reported that National Assembly Education, Science and Technology Committee member Kim Se-yeon (GNP) reported that 146 people had been arrested for faking their academic backgrounds between 2008 and 2010, with 76 caught in 2008, 32 in 2009, and 38 in 2010. Of those, 40 worked for hagwons, but while the use of faked diplomas from US universities is mentioned, there's no mention of foreign teachers, except at the end, where Kim is quoted as saying,

Because of the social controversy over the problem of foreign instructors lacking qualifications, a similar verification procedure for faked diplomas should be regularly and systematically carried out.

We might remember Rep. Kim Se-yeon as one of those who mistakenly declared that over half of NSETs break their contracts. One imagines that, especially with her invocation of foreign teachers, that if there were a sizable number of foreign teachers involved, they would have been mentioned. So I decided to take a look.

In 2008 I was able to find three cases connecting native speaking teachers and forgery. In the first, in May 2008, three people from Ghana and a Korean-Australian (the latter's role isn't explained) were arrested for faking documents (including alien registration cards), and a hagwon owner who hired them was also booked.

In another case in November 2008, an American 'delivery boy' who worked in Korea for 12 years with a forged diploma was arrested, but though NoCut News reported (via its headline) that "a bunch of native speaking instructors had been caught for faked backgrounds," 5 other teachers were actually busted for teaching privates (made clearer in this article).

Another case from December was reported by SBS, who opened their report by saying, "These days, if one establishes an English hagwon, what’s crucial is securing a native speaking instructor. In particular, finding a native speaking teacher with a proper teaching qualifications is almost impossible." [It leaves out the part about this being impossible because hagwons generally don't look for them.] The case is better explained here, where we're told that a Nigerian who worked in a hagwon as a native speaking instructor was arrested as part of a group that used a computer program to copy credit cards and made 28 fake cards, stealing 138 million won. (It doesn't mention forged diplomas, though).

So for 2008, that makes 4-5 foreign teachers (or one or two people from one of the 7 English speaking countries allowed to teach English) with fake diplomas. There were none reported in 2009, and the Ronald Rhee case was the only one in 2010 (he was a dual citizen, and the other person arrested who used a fake degree was a Korean citizen) and the only case of a 'native speaking teacher' being busted for a forged degree that I could find this year was a Chinese woman working in an elementary school.

While the association of 'native speaking teacher' with 'forged degree' may have had some substance five or six years ago, it doesn't seem to be the case now, though that doesn't stop it from being brought up in advertisements passing as news articles as one of the 'social problems' caused by foreign teachers.
Posted by matt at 1:14 PM

To add ridiculosity to all of the above, the whole idea of supplying a diploma to demonstrate academic credentials is completely ass-backwards in the first place. The modern academic world uses official transcripts purchased from a registrar and sent under seal to potential employers/graduate programs/etc.

The fact that South Korea still clings to an outdated Confucian notion of the literal diploma is, well, frustrating to say the least. Is diploma paper made of magic pixie dust, while a notarized, sealed, university issued transcript is somehow less valid?

Some of the academics I know don't even have their diplomas, because only doctors and really insecure people actually frame the things and put them on their walls.

Seriously Korea, registrars and their staff get paid pretty well to do all of this for you, and I know for a fact they sent transcripts overseas upon request, notarized and everything. And to state the obvious, it's a hell of a lot easier to forge a dipoma (ooh! so shiny! cursive Latin!) than it is a transcript, which you then have to get notarized and sealed.