[Update: I suppose one of the quintessential modern girls would have been Choi Seung-hui.]

From the Chosun Ilbo, Jan 20, 1932
What I found interesting was this cartoon about the 'modern boy': 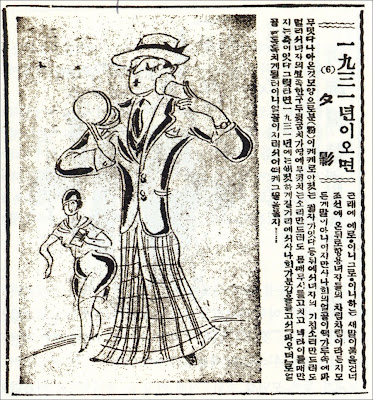 From the Chosun Ilbo, Nov. 29, 1930
It would appear the 'metrosexual' trend in Korea is not a particularly new one, if this cartoon is to be believed.
Posted by matt at 8:53 AM

There was a TV drama '최승희'.
채시라 played her.
I can remember it vaguely.
Anyway her acting was impressive.

I was surprised when I knew that there were also some girls who prostituted for diamond rings or watches, kiss girls who sold kisses,besides stick girls, street girls, hand girls..variety named girls around in 1930 in Korea.

Sounds like an interesting drama. Are the different kinds of prostitution based on fact? It wouldn't surprise me at all, but it's always worth checking.

I remember hearing metrosexual thrown around as a real compliment by Korean girls regarding guys they were into back in about 2003. Maybe they were just waiting for a term to define the Ggot mi nam. Those are some risgue outfits. Seems like the Japanese occupation didn't keep some people from having a good time. Did they make the trains run on time?

Many things still surprise me.
This series seem interesting to see the past life style but couldn't fine them at any bookstores.

just found them searching each title.^^

Those 'toons are great finds!