Planning to tour the Blue House?

Here's the English page about tours to the Blue House (Cheongwadae) on its website; note the pop-up: 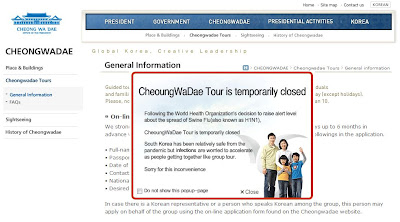 Following the World Health Organization's decision to raise alert level about the spread of Swine Flu (also known as H1N1),

South Korea has been relatively safe from the pandemic but infections are worried to accelerate as people getting together like group tour.

Compare that to what can be found on the Korean-language site: 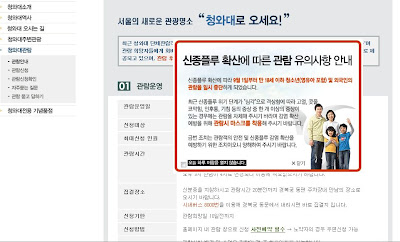 Due to the spread of the H1N1 Flu, starting September 1, anyone under the age of 18 (including infants and preschool children) and foreigners will be temporarily excluded from tours.

As the alert levels of the H1N1 Flu have elevated to "serious" levels, we request anybody who displays one or more of the following symptoms* to refrain from participating in tours, and in order to prevent the spread of infections we request people to wear masks during tours. *Symptoms to heed: high fever, runny nose, stuffed nose, sore throat, coughing, etc.

As this measure is to ensure the safety of tour participants and to prevent the spread of the H1N1 Flu, we request your understanding.
______

This was sent to me by Benjamin Wagner, who said "a student happened to mention that a Chinese classmate wasn't allowed to go on the school tour to the Blue House because foreigners were excluded. We got curious and decided to call up 청와대 to find out what the policy might be. A friendly woman in charge of 청와대 관람 (viewing [tours]) told us that anyone under 18 years of age and foreigners were temporarily excluded from all tours at this time. They are not sure until when this will continue, but they will put up a notice about any changes on their website."

I'd imagine the source of the majority of H1N1 infections in Korea is now other Koreans, not foreigners, but then that has been the case for HIV infections for over a decade and people still see AIDS as being a foreign disease. On the other hand, what president would want people like this walking around his house? 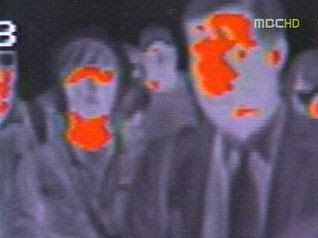 That's not to say the Blue House shouldn't be careful, but you'd think their precautions would also extend to Korean adults.
Posted by matt at 10:04 AM

just as stupid as can be when adequate protections could be in place with nationality neutral rules. e.g. 'off limits to anyone who has been abroad within the past month'.

absurd that a gaggle of Korean nuns just back from treating swine flu patients in Mexico are allowed but a "foreigner" who hasn't been out of the country in years is excluded.

when is this administration going to get a clue?

when is this administration going to get a clue?

Government sanctioned racism.
In the push for nationalism and an us versus them mentality, government sponsored racism seems to be on the rise in South Korea. Foreign embassies and governments should address this issue to the South Korean government. This ban is ridiculous and offensive.

Note that decision to “close” the tours “follow[s] the World Health Organization’s decision to raise alert level[s] . . .” In the coded language there’s a rich Sloterdijkian cynical reasoning at work: these measures don’t spring from nationalist or xenophobic concerns but from Korea’s desire to act on the recommendations of the international community. (No mention of the WHO in the Korean version of course.)

The next sentence, also without Korean equivalent, is also interesting if you consider substituting Koreans for "South Korea" and foreigners for "people":

“South Korea has been relatively safe from the pandemic but infections are worried to accelerate as people getting together like group tour.”

Lastly, in noticing the difference between the Korean version ("local" message) and the English one ("global" message) I am reminded of a paper by Professor Sealing Cheng discussing a similar phenomenon.

“The KAAF [Korean Anti-AIDS Federation] aims to win the global battle against HIV/AIDS the Korean way by reviving ‘Korean’ values of purity, family and morality. The new KAAF pamphlet introducing the organization – including its appointment as UNAIDS Information Support Center in Korea in 1998 – speaks volumes about this global – local dynamics (KAAF, 1999). Produced in late 1999, the pamphlet was the KAAF’s first bilingual publicity material, signifying its ambition to reach an international audience. Its titles in Korean and English reflect the KAAF’s commitment to a local solution for a global problem. The Korean phrase ‘do-ui-segye geonseollo e-i-jeu-reul geuncheol haja’, literally ‘Let’s eliminate AIDS by Building a Moral World’, was translated into English as ‘Let’s get together for AIDS prevention through safe sexual practice’. The moral element was completely absent in the English translation, replaced by the commonplace refrain of ‘safe sexual practice’ – an ambiguous expression in the Korean context allowing for the advocacy of purity in spite of its relative fixity in the English speaking world that suggests condom use. Yet since I was asked to proofread an English version of the pamphlet, I realized that even this pithy phrase was a mutation from the earlier version of ‘correct sexual practice’. From ‘moral’ to ‘correct’ to ‘safe’ sex, the KAAF opted for a ‘culturally appropriate’ translation for their international audience, allowing for the coexistence of the global and the local.”

Nice if there were more study on this idea of Korea’s “culturally appropriate” translations for the international audience.

I had no idea bout the Blue House tour until I read about it here! I'd really like to take that tour. What if I show a certificate of vaccination for swine flu? That should be acceptable! Any chance?

If you want to look at racism in action, just visit almost any western nation! The Koreans are simply trying to protect their beautiful and wonderful country - and they need to make such efforts. It's unfortunate that many people view it as racism because that is not the intention - at least in my opinion. The USA and Canada are extremely racist, but I haven't seen much racism here in comparison. Honestly!

Foreigners should be allowed to view the Blue House à la the White House: make foreigners contact their embassy or their National Assembly member. I'm sure that process could work in an H1N1 screening or two.

WORD VERIFICATION: ballogat... what you get when you melt down all your gats.

@Anonymous,
If you want to see racism in action, go to any country on the planet. I don't know of any country whose residents are not guilty of racism, reverse racism, and all the attitude that comes from those. Also, people can be racist without intent, for example, if an employer who fancies himself race-neutral hires a candidate of his own race over an equally qualified candidate from another because of whatever reason he came with to justify it, such as better compatibility, cultural familiarity, less of a distraction, whatever.

I wonder, though, if this incident can not be considered nationalistic rather than racist. I would be interested to see if gyopo or naturalized citizens would be allowed in. Anyone willing to try?

I'd much sooner they just start telling the public to stop spitting. I don't care if they make some group unwelcome somewhere.

Article about this in today's Korea Herald here.

Anyway, yes, there is racism here, there is racism in the US, and Canada, and the UK...and it's all about power dynamics, and checks and balances. There's not much recourse here for LEGAL immigrants, whereas in the US there are protections even for ILLEGAL immigrants...and the US has one of the worst records in the industrialized world for the treatment of immigrants who enter illegally.

The ban on immigrants seeking entry to the US, who were HIV+ for instance, just ended this year. Gooooood luck if you're khaki colored and have a Koran. However, there is, and has been a consciousness of this, and a dialogue within domestic media. Whereas in Korea, the government fuels it, the media stokes it, and the man on the street believes it, and is bent to believe it.

Shit is shit. Period. Both groups are wrong, recourse or not. Thing is...next time you're in your native country (or if you're Korean and you think this is absurd)...stand up. Say something about it. Don't just whine here when someone treats you poorly...go home, and make sure that "foreigners" in your country are treated well.

Korea is very kind to foringer.
western nation's racism is so big.