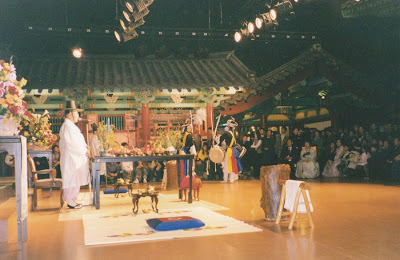 These are photos of the second wedding I went to in Korea, in early 2002 (both were of co-workers I didn't know well). While the first wedding I went to mixed the western form of a wedding with things like confetti spray cans, this one was a traditional Korean wedding. 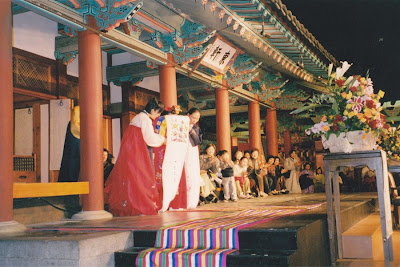 There were samulnori performers in traditional garb, a hen (which had its feet tied, but which fell over on two occasions and started squawking) and traditional architecture, but also the kind of photographer with his flash running around taking photos and guy with a video camera with a huge spotlight (which is visible below) that you see at more western style weddings. 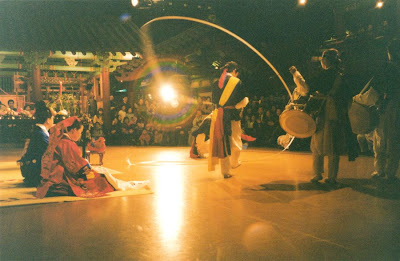 Oh, and it was at Lotte World’s folk village.

Pictured below is the sedan chair that the bride got into and which I got chosen to help carry. 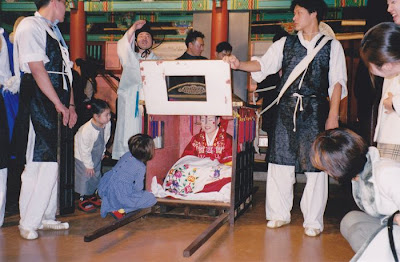 Whoever designed that chair obviously never had to lift one, since the handles were square in shape, and not rounded, and with the weight of the thing, the edges quickly dug into my hand. Hopefully the sedan chairs of old had more rounded handles…
Posted by matt at 4:01 PM

This is a great travel blog you have here. I'm a first-time visitor, but I'm very impressed. I have a travel blog myself which I hope to be a top resource for those looking to go on vacation.

I'd like to exchange links with you to help spread some traffic around between each out. Please let me know if this is okay.

I ever thought it must be very heavy but never thought about the square handle. You got a good experience! 예식장 wedding usually sucks.