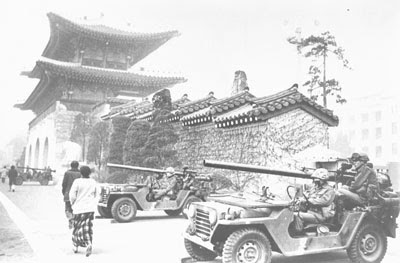 Today is the 30th anniversary of the 12.12 Coup in which Chun Doo-hwan (and colleagues such as Roh Tae-woo) took control of the military and began maneuvering towards the presidency - a path which led the following May to increasing the level of martial law, closing the national assembly and universities, the arrest of dissidents and politicians, and the Kwangju Uprising.

In the wake of the assassination of Park Chung-hee, figurehead vice president Choi Gyu-hwa was made president, General Jeong Seung-hwa (Chung Sung-hwa) was put in charge of martial law command, and Chun Doo-hwan was put in charge of the investigation into the assassination. A closer look at the coup and the events leading up to it can be found here. The photos, including one of soldiers in front of Gwanghwamun (above) and Jeong Seung-hwa (who was arrested during the coup, below) are from here. From that article, it seems there will be nothing new learned from those involved who are still alive. It mentions that Jeong died in June 2002, but that former presidents Chun Doo-hwan and Roh Tae-woo are mostly in good health (other than both having prostate operations and Roh being hospitalized for Pneumonia last year). 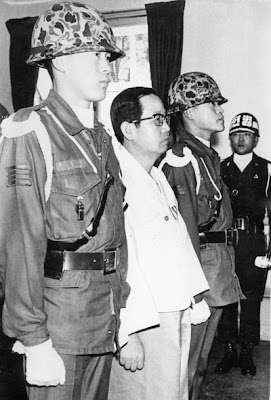 Gen. Jeong Seung-hwa after his arrest.
It's hard to believe that it was only 30 years ago that this happened.
Posted by matt at 11:35 PM