A year ago the Korea Times reported on the oldest existing Korean film:

The Korean Film Archive (KOFA) on Tuesday screened the oldest surviving Korean film, "Cheongchun's Sipjaro,'' which was made in 1934. A film archive official said the film, directed by An Jong-hwa, was discovered in Korea. However, the owner of the film declined to be identified.[...] 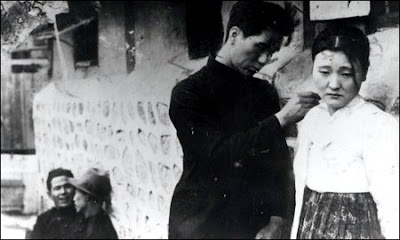 "Cheongchun's Sipjaro,'' a black-and-white silent film, was first screened at the Joseon Theater, Seoul in September 1934. The film is a melodrama about lives of the poor.[...]

Before "Cheongchun's Sipjaro'' was discovered, the oldest Korean film that KOFA preserved was 1936's "Mimong'' (Sweet Dream). "Mimong'' was directed and edited by Yang Ju-nam in 1936. The China Film Archive donated the film to the KOFA in 2005. Almost the entire reel of the film was preserved.

Late last year a second DVD box set titled 'The Past Unearthed' was released, and included three films from the 1930s, including the aforementioned Mimong, which had been restored. The first box set included films from the 1940s, two of which I looked at here and here [Two more have been released since then, here and here]. This time I'll look at Mimong.

Mimong is the story of how modernity is corrupting women, or at least that's one interpretation. The wife in the story has no interest in tending to her husband or raising their daughter, spending too much time on herself. 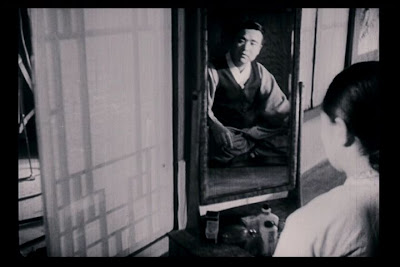 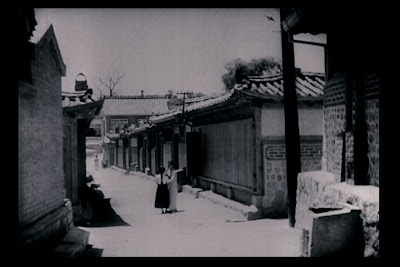 She goes off to the store, meets her daughter (above) in the street, and tells her she will buy her some clothes. The visit to the store (and the entire movie) highlight different aspects of modernity, such as mannequins: 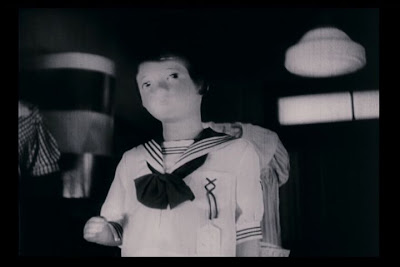 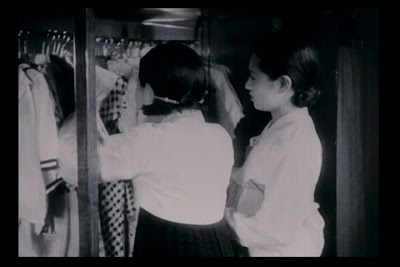 A shifty guy steals her wallet, 'finds' it for her, and asks her out for a drink. 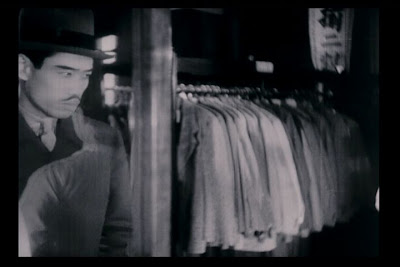 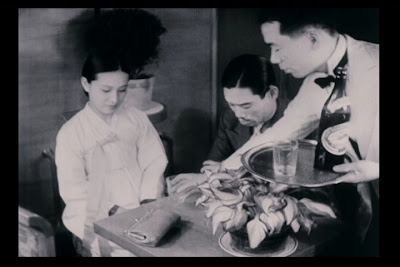 As they drink beer at a restaurant/cafe, her husband also drinks it at home. Upon her return there, her husband gets angry at her and sends her on her way. 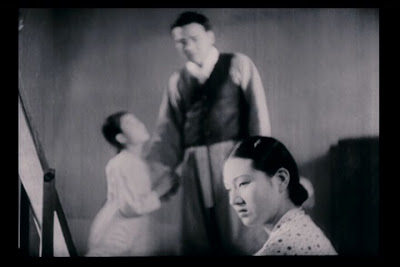 There she shacks up with her new, rich beau and engages in scandalous behavior - like smoking in bed. 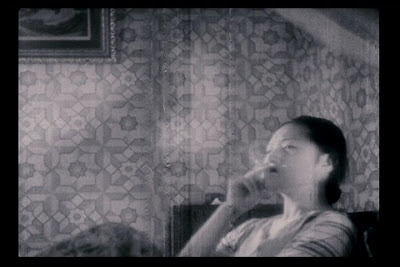 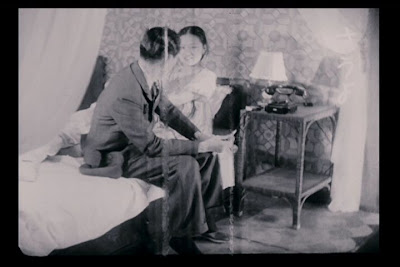 Then the shifty fellow uses a telephone to plan the robbery of a hotel customer. 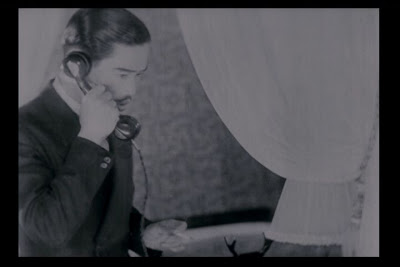 Meanwhile, the woman's daughter is at at school, learning about traffic safety, though she may not be paying enough attention. 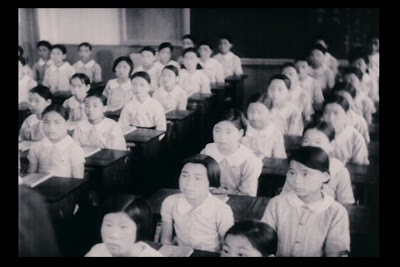 The woman enjoys things like modern dance recitals and getting her hair done at a hair salon. 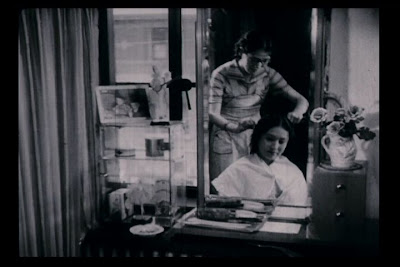 Then she finds out her new beau is not the rich man he said he was, and snitches to the police about his thieving. She decides to rush off to Busan, taking a taxi to Seoul Station. 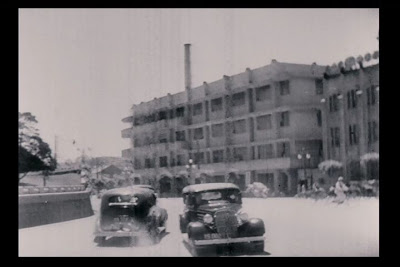 On the way, she passes Namdaemun. 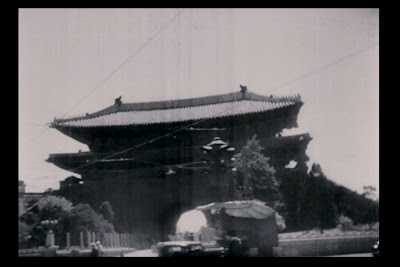 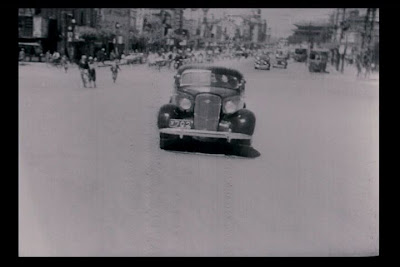 She arrives too late, seeing the train leave, and orders the taxi driver to race it to the next station (Namyeong or Yongsan, I imagine). 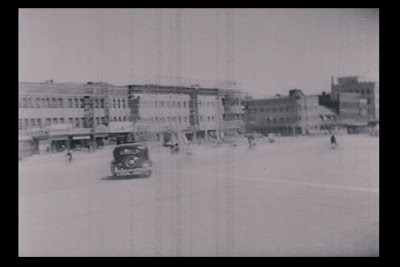 In an odd coincidence, the taxi, in such a hurry, runs over a little girl - the woman's daughter. 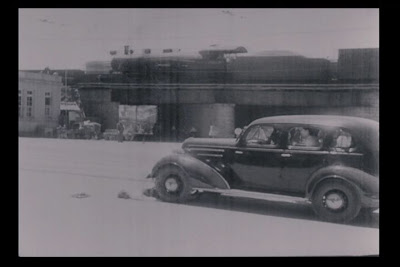 Looking at the bridge in the background, and the angle at which the street passes under it, the route the taxi takes can be seen below. 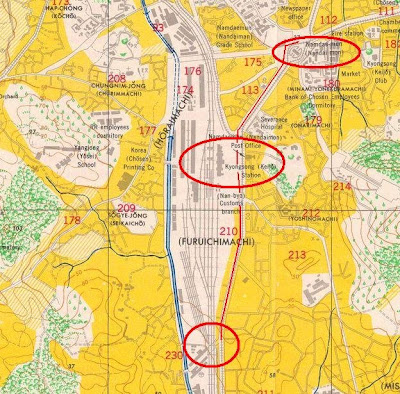 The daughter turns out to be okay, but I'm sure you can imagine the fate of the woman, as there's really only one thing she can do, right?

As this page notes,

The movie was released sometime after Henrik Ibsen's A Doll's House debuted in Japanese-occupied Korea, when debates about "New Women" were particularly rife. As such, it reflects popular attitudes regarding New Women at the time. Ae-soon's unconvincing insistence on buying the most expensive items at a department store and the sudden castigation she is subjected to for the purpose of emphasizing maternal responsibility appear to be forced moves that were introduced into the unfolding narrative in an attempt to reductively portray the controversial New Woman as licentious, vain, and immoral.

This looks more closely at the concept of the 'modern girl.'

In colonial Korea, the "modern girl" became another name for new woman. It was also an imaginary location where all the "bad" elements of emulation congregated, and was used as a term that effectively expresses the "vanity" and "shell" of a new woman. The elements included fascination with new goods and customs symbolized by bobbed hair and western-hybrid dresses, and the awakening to bodies and sexual desires. The Korean modern girl was a new woman as the object of envy, scorn, or voyeurism. But such objectification was ambivalent. On the one hand, bodies, sexuality, and modern customs were criticized as decadent and corrupt, but on the other hand, they were fascinating. A Cartoonist An Sokju denounced the modern girl phenomenon for immorality, depravity, and capitalist commodification, yet his art reveals his own desire, fascination, and fetishism.

Here's an example of An's work (more can be seen here): 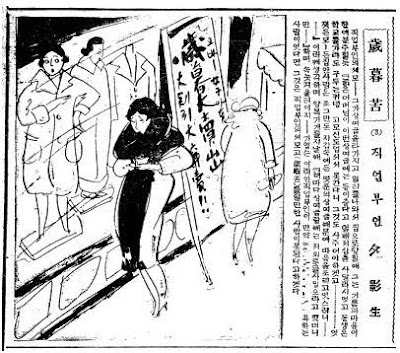 What is a "Doenjang Girl," you might ask? Definitions differ, but tell-tale signs include the following: using a lot of high-priced scents and makeup; wearing luxury one-piece dresses and handbags; eating at expensive "family restaurants" like TGI Friday's and posting photos of the food on your homepage; frequent window shopping at major department stores; imitating "New Yorkers," or at least as they appear in "Sex and the City," a favorite "Doenjang Girl" program. Oh, and the most obvious symptom---walking around with a cup of Starbucks coffee in your hand.( SEOUL magazine. 2006/08/16)

One Netizen's satirical account of a day in the life of a doenjang-nyeo runs as follows. "Gets up at 7:30 a.m. to the sound of the cell phone alarm, even though her first class doesn't start till 10, and heads for the bathroom. To give her hair the Jeon Ji-hyun-look, she refuses to use cheap shampoos... she can't eat breakfast because she’s too busy doing her makeup, so she heads for the Dunkin Donuts in front of her school.

"For diet reasons, she orders a straight Americano -- no sugar, no cream -- but then eats donuts crammed with jam and sugar. Same for lunch. Because the doenjang-nyeo knows how precious she is (just like the L'Oreal commercials, she says to herself, 'Because I'm worth it!') she can never be seen eating with the rest of the students at the cafeteria or the student center. The three just don’t mesh.

“The doenjang-nyeo blows in one sitting the amount a regular student spends on food for a week.”

Certain aspects of this are also looked at in this Joongang Ilbo article.

I wonder what contemporary movie could be used to illustrate the concept of the doenjang nyeo? And what is there to say when such similar attitudes exist towards these women 80 years later?
Posted by matt at 3:38 AM

It's not difficult to see Doenjang Girl style in movies and dramas these days.
I think most women long for the lives of the characters in the sex and the city.
The reason that the movie is criticized as a Doenjang Girl movie is some Doenjang Girl who want to live like them forgetting their real cercumstances, driven by longing.
Who can point the finger of blame the successful women who afford luxury?

1934 also saw the making of another well known silent film "Goddess", as well a movie about woman and lives of the poor (a prostitute and her young son in this case), yet the filmmaker chose to deal with the subject matter in a completely different angle, which is the main character's striking for freedom and independence within the realm of her live. The film being old is not the problem but the culture behind it is.