No, not that Roadkill. This roadkill:

The Joongang Ilbo has an interesting article about roadkill on Korea's expressways, and the complications surrounding the accidents they cause. 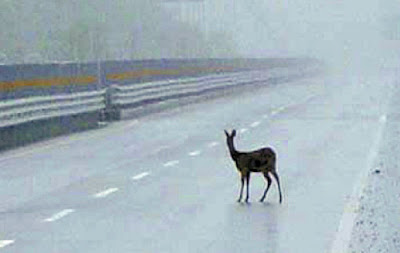 I've written about water deer, pictured above, before, but I was surprised to find out they were so plentiful, and that they were being killed in such numbers. This response is interesting:

The KEC division in Muju County, North Jeolla, has taken an unconventional approach to the problem. Water deer, which represent the largest population of wildlife roadkill in Korea with 1,557 of the 2,286 recorded deaths last year, tend to run away at the sound or scent of tigers.

So KEC officials, in cooperation with Daejeon Zoo, recorded the sound of angry tigers roaring and have installed speakers along the Tongyeong-Daejeon Expressway in the Mount Deokyu area to alert the deer. As odd as it might sound, the KEC also went so far as to collect tiger droppings from the zoo to scatter in the area.

“Although it’s difficult to provide statistics on the effect of the speakers, we have noticed a difference,” Jung Hong-joon of the KEC’s PR department said.

Since 2005, the KEC has been installing fencing along highway wildlife crossings. The KEC reports the number of animal fatalities, which had increased drastically since 2004, began to decrease last year because of this measure.

Here are the roadkill statistics for the past decade: 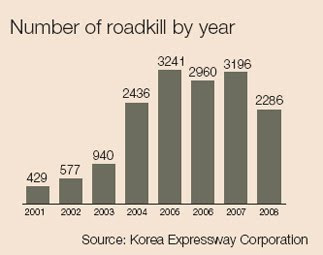 I also like this picture of the leopard cat, or salkwaengi (살쾡이) included in the article. 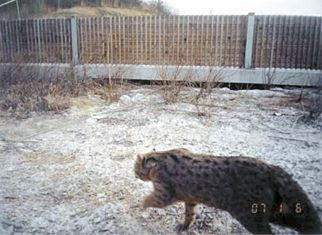 Be sure to read the whole article.

Oh, and the youtube search for the movie Roadkill turned up 'New York City' by the Demics, one of those songs I'd forgotten I'd known until 1996, when I was doing a radio show and a caller requesting it, telling me the lead singer had just died of cancer. He sounded like he was in shock, so I didn't have the heart to tell him I didn't know who they were - until I put on the record and went, 'Oh yeah! That song.'
Posted by matt at 5:57 PM

I once worked on a documentary on high-elevation farming in Korea. Korani (I want that word to catch on in English) were the scourge of the farmers, often digging up their tubers and cabbage.

Those suckers have tusks! Kinda cool.

People damage the nature and the animals who lost their habitat harm humans to live to tell the tale. Tha's justice!

Justice? Sometimes those humans who are harmed are five-year-old girls who had no control over the loss of the animals' habitat.

Yeah sometimes people are harmed by wild animals by accident. I'm so sorry for that little girl..

Well actually most vitims are not related to the loss of animal's habitat directly.

I'm not an animal lover and I'm scared of even little animals.
But I can't deny that people harm the nature and I feel responsible as a human being who enjoys the benefits of civilization.