A look at 'Tamra the Island' (among other things)

I was looking at Naver's front page the other day when this article caught my eye. It turns out actress Seo Woo is actually three years older than previously thought. Dramabeans has more on this here. I wouldn't have known who she was if not for this post at the Grand Narrative, which mentions her upcoming film Paju (and where I learned she's the girl in the commercial below).

By coincidence I happened to read this review of Bandhobi (which I mentioned here), which mentioned the drama Tamra The Island as an example of a Korean movie or TV show with foreigners (more on that here). Seeing as it stars a foreign male in a perhaps romantic role with the female lead - played, coinicidently, by Seo Woo (interviewed here) - I thought I'd check it out. While waiting for it to download, I finally got around to watching the film Crush and Blush, which I had heard good things about and which stars Gong Hyo-jin (below right, who I remember best from the 2002 film Conduct Zero).

It's a fun movie. For example, the reason Seo Woo's character is smiling below is because she's typing 'I want to wear your panties and rip them to pieces' to a (female) teacher.

There's a reason for it, of course. And no school film would be complete without a festival showcasing grinding dance moves, which, of course, are simply cute, and nothing more.

As for Tamra The Island (reviewed here), I've just watched one episode, but it was entertaining enough to warrant watching the second episode (which I rarely do with dramas... when I watch them at all). The opening scenes set in England, however, are at times painful to watch. 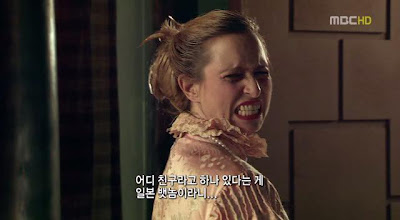 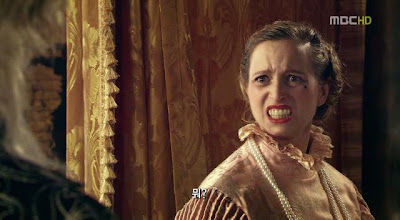 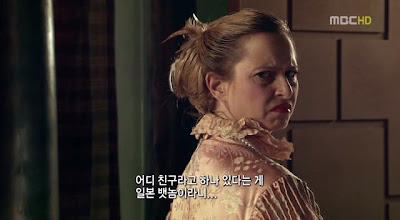 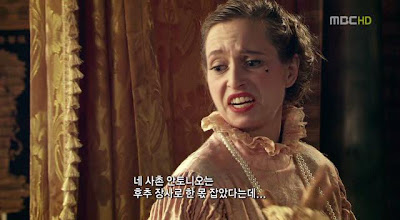 It's certainly strange watching westerners contort their faces in the way Korean actors do in TV dramas and comedy films, as it's not how they act in western films. On the one hand, it's a Korean production, but on the other, it's not like there isn't a lot of exposure to western films and TV shows, so it strikes me as odd that they're portrayed this way. It's not like this is uncommon, however, and one wonders if this could be seen as part of the use of foreigners as validating Korean identity (or the worthiness of Korean culture) such as when foreign students teachers are taken to Dokdo to to be used as propaganda, or when Misuda participants reveal that they can eat kimchi or sing songs in Korean.

One thing I couldn't help noticing in Tamra The Island, however, was this, after a shipwrecked Englishman named William is washed ashore on Jeju: 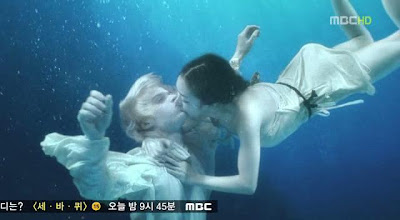 Uh-oh. A foreign man with Korean woman. Kissing, even. Not a recipe for success, I think; it goes against the grain of media representations of evil U.S. soldiers who rape, murder, and crush middle school girls under tanks for fun, and molesting, English-teaching predators. Even worse - she's scantily clad! (You'd think this would work in the show's favor, actually, but due to tough competition only it has ratings of only about 5%.) 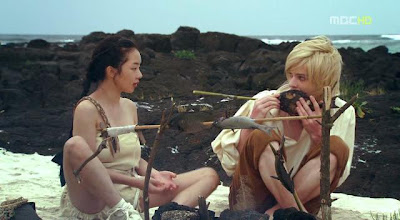 When the girl, Beo-jin, is told that if he's found, he'll be killed, she hides him and tells him her name. All he understands is what her name, Beo-jin, sounds like in English: virgin. He thinks she's saying she's a virgin, whereas she thinks he's repeating her name, so she asks his. He thinks she's asking him if he's a virgin, and he shyly says "Me too," which she thinks is his name. How cute! 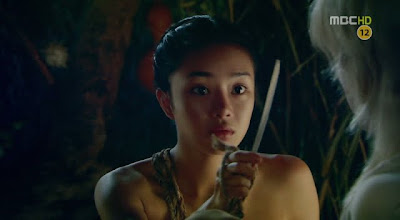 Now, Beo-jin doesn't emasculate him with that knife, but she doesn't have to, as the previous scene has already accomplished that by portraying him as an inexperienced virgin, and therefore not a threat to the young, scantily clad female lead. Therefore this is okay:

Besides, she's only giving him air - just one of the ways she is depicted as being in control in her relations with the foreigner - something quite opposed to her relations with the other Koreans around her, as she's punished by her mother and frustrated by another male, a seonbi exiled to Jeju. While I'm sure this dynamic will change as the series continues, the opening of the series - the episode which will determine if people want to stick around to see more - presents us with a helpless, harmless foreign white male.

I have to add that it's amusing that the scene in which he's shown to be harmless takes place while they're alone in her secret hiding place - a long, dark cave. 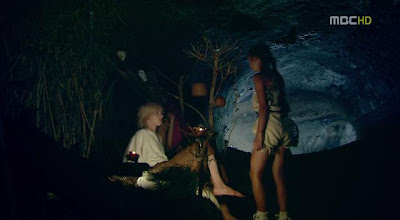 Hopefully it doesn't flood at high tide.
Posted by matt at 8:13 AM

Freudian! Beo-jin does NOT sound like virgin, except to Koreans!

Matt wrote:
It's certainly strange watching westerners contort their faces in the way Korean actors do in TV dramas and comedy films, as it's not how they act in western films. On the one hand, it's a Korean production, but on the other, it's not like there isn't a lot of exposure to western films and TV shows, so it strikes me as odd that they're portrayed this way.

From first-hand knowledge, I think the reason is an innocuous one: Korean directors are used to directing the way they direct. Consequently, whether the actors are Korean or non-Korean, speaking Korean or some other language, these are the mannerisms that the directors think will reflect whatever emotion is supposed to be reflected, so that's what they tell the actors to deliver.

Little FYI -- the company that is producing Tamra the Island (Group 8) is the same company that produced Boys Over Flowers. They are one of the largest and most established independent production houses in Korea.

Apologies if the Group 8 thing has been widely pointed out.

kk..quite funny.. so she thought his name was '미투'? "Hi 미투. I'm a virgin."
That could happen enough..I undergo that kind of things at work often.
It's fun. That's why I'm interested in other languages.
Many people, including me, watch another drama on KBS at the same time.(솔약국집 아들들) That's more realistic story.I just once watched the preview of 탐나는도다. It seemed fantasy and the man looked so young so it didn't attract me.

Hi Matt, great blog. Kim from http://www.koreanclass101.com sent you an email. Let me know when you get a chance to read. Thanks!