Are Korea's AIDS-related immigration restrictions to be loosened?

The Korea Times reports that

Korea is moving to scrap its policy of banning foreigners with HIV/AIDS. The plan emerged in the face of protest from foreigners and legal experts against what they call discriminatory measures. They claim such policies infringe on human rights and have little effect on protecting Koreans from the contagious disease.

Under the immigration law, authorities can ban the entry of foreign nationals who test positive for HIV/AIDS, and then deport them. U.N. Secretary General Ban Ki-moon suggested that Korea abolish the policy. [...]

A court concluded last December that the immigration office should cancel the deportation order against a foreigner who tested positive for HIV, saying it was in the interest of Koreans to detect and treat HIV/AIDS rather than deport the victims. [...]

According to the Korea Centers for Disease Control and Prevention, there are 13 countries that ban the entry of foreign AIDS patients: the United Arab Emirates, Brunei, Egypt, Iraq, Korea, Malaysia, Oman, Singapore, Sudan, Yemen, Tunisia, the Turks and Caicos Islands and Qatar.

Why would Korea want to leave such distinguished company? But wait:

"The relevant ministries have yet to reach a conclusion on the issue," said Park Il-hoon, deputy director of the Ministry for Health, Welfare and Family Affairs. "However, we will continue to restrict AIDS patients in the entertainment business. Immigration officials will make necessary changes to the regulations."

I love that euphemism: 'entertainers.' Not 'camptown sex workers,' but 'entertainers' (cue the Jam's 'That's Entertainment'). On the other hand, considering the sordidness Jang Ja-yeon's suicide uncovered, perhaps it's an apt term. At any rate, the deputy director of the Ministry for Health, Welfare and Family Affairs seems to be passing the responsibility to immigration:

Meanwhile, the Korea Immigration Service (KIS) said it has yet to decide whether to revise visa regulations requiring foreigners applying for certain types of visa to take AIDS tests.

"There will be no changes for E-6 visa applicants. We do not deal with non-professional workers as the Labor Ministry is responsible for AIDS tests on E-9 visa applicants," Ahn Kyu-seok, the KIS spokesman told the Korea Times.

So again, the E-6 'entertainers' visa is not changing, E-9 (industrial workers) are not immigration's responsibility (so it's up to the Labor Ministry), and as for E-2 visa holders, referring to the petition with the Constitutional Court against HIV and drug tests,

"However, if the Constitutional Court rules that making foreign instructors submit documents on HIV tests is unconstitutional, we may have to scrap the requirement," Ahn added.

Don't sound so enthusiastic. Wait - you may have to scrap the requirement? Eh, nothing to get worked up over until I see the interview in Korean. Of course, while some might wonder how teaching English transmits HIV and why immigration may only change it if forced to (according to Kang Shin-who), perhaps this official has seen this gem from Anti-English Spectrum: 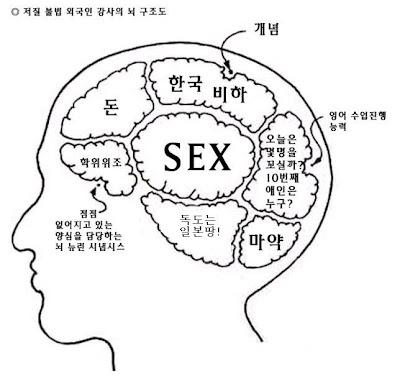 They know the temptation inside your heart brain...
Posted by matt at 5:33 PM

Korea apparently takes good care of its HIV-positive, and this ruling, if it goes through, has the potential to undermine that or bankrupt the system.

i just gotta say this is quite nearly my favourite k-blog... you post the best commentary AND the smoothest jams.

In reference to E-6 visa holders: "I love that euphemism: 'entertainers.' Not 'camptown sex workers,' "

Well, smartass, some of the Misuda girls are also on E-6 visas. Since you seem so interested in camptown sex workers, did you ever fuck one of them at a camp?

I like Ban Ki-moon. Here's his saying for this.
"I call for a change in laws that uphold stigma and discrimination, including
restrictions on travel for people living with HIV... [60 years after the Universal
Declaration on Human Rights] it is shocking that there should still be
discrimination against those at high risk, such as men who have sex with men, or
stigma attached to individuals living with HIV."

I read that Ban Ki-moon met and said to Lee Myoung-bak last year that Korea is
included in about 12countries that ban entry of foreign nationals who test positive
for HIV. He suggested that Korea abolish the policy. And it served as a momentum for relaxing restriction.

As a libertarian, I detest the thought of any government telling me when to see a doctor and then wanting to know what the doctor found out ... I guess an employer can do that, as long as I have the choice to vote with my feet and go see someone else about a job.

Govts are intended to serve people, every person under their purview and not just the ones who vote and pay taxes, but as Heinlein said I think, in a mature society "civil servant" is synonymous with "civil master." I'm looking for a less mature society, then ...

Everybody should get themselves tested for every disease they might be at risk of having, but the results of the test needs to be a matter between patient and doctor. That is all.

Ben wrote:
'Lifting HIV travel restrictions in Korea has the potential to undermine or bankrupt the Korean healthcare system'

Hmm... I did not write "Lifting travel restrictions" in those words, but you put them in quotations as if I had. Nor did I write "bankrupt the Korean healthcare system."

I actually wrote "... this ruling, if it goes through, has the potential to undermine or bankrupt the system."

By the system, I was referring more toward the part of the healthcare system that deals with HIV-positive patients.

Before I go on and give a citation (for what I actually wrote), would you care to explain why you deliberately misquoted me?

They were single quotes '...' and they were used for brevity's sake in summarizing what I thought was your position. I was obviously mistaken.

Sorry if you felt I misrepresented your position. But they weren't proper quotes after all, and there was little fear of a misunderstanding as your actual comment was two inches away.

As for your emphasis on "this ruling" -- I'm not sure what you could be referring to since the only "ruling" discussed in the article that could "go[] though" was the possible outcome of the Con Crt's decision on the E-2 visa. (It couldn't have been the Heo case you meant since that has already gone through.)

Was that what you thought would "bankrupt the system"? AIDS infected E-2 teachers?

If that was your point sorry I left a comment at all. It's willingly retracted.

Ben, using quotation marks (whether single or double) is an indication that you are writing exactly what the other person wrote. Your claim that you did so for brevity's sake does not hold water since what I had written was hardly any longer than what you had put in quotations.

By changing two parts of what I'd written, what you were doing, it appears, was trying to pigeonhole what I was saying into something you felt you could argue against.

Even now, in your response where you probably should have taken the nobler route of simply saying "my bad" or some such, you again try to point up what you think I was saying (bashing the E2s, right? Because that's what I do, right?) because you're not really interested in a discussion at all?

Is this Ben Wagner, by the way, or a different Ben?

I see it's going to get personal. Anything to avoid discussing the issues I guess.

I'm sorry that saying "sorry" and "I was obviously mistaken" were not contrite or "noble" enough for you. I'll keep in my your sensitivity in replying to (or, more likely, refraining from replying to) future comments of yours.

And as I said, I withdraw the request as I see we must have been referring to different articles. I was talking about the article that was about lifting HIV travel restrictions in Korea, the one attached to this post. I'm not sure what you were talking about - I thought I knew, but I was mistaken, obviously. Again, my apologies for any perceived misrepresentation.

That picture of the foreigner teacher's brain is quite funny. But it's also very true. Just read the Dave's ESL threads. That brain's diagram just about describes at least 90% of the threads in that site!

And what percent of foreign English teachers are on "Dave's ESL" contributing to those threads?

How representative of the average foreign teacher is the Dave ESL thread board?