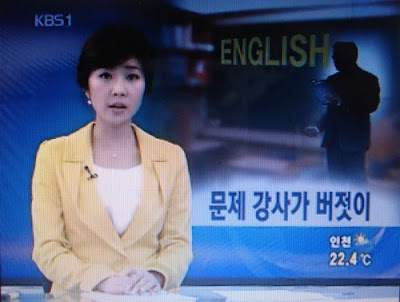 On August 25, a KBS news report titled "Unqualified Foreign Teacher Teaching Openly" looked at a problematic foreign English teacher in Busan who, despite a violent past, is able to work in Korea due to a loophole in the system.

'J', a Canadian working at an English hagwon near Haeundae, is said by the hagwon owner to be hot tempered and that children complained about being hit by him when being scolded.

It was found that at a high school in Busan that he taught at 4 years ago, there were problems such as theft and that he sent a 'lewd email' to students.

Worst of all, it was found that in Canada in 2003 he had been barred from the local teacher's association for uttering death threats, inappropriate relations with students, and 'police violence' (경찰 폭행 - I take this to mean perhaps he has a criminal record for violence? Or he was violent towards police?).

"Because of this loophole in the system, unqualified foreign teachers are able to teach and children are being harmed."

Whether this article marks the beginning of a media campaign against F-2 visa holders, or if it's just an isolated case, time will tell. Judging by the title of Anti-English Spectrum's post on this report ("Wah! The Worst Low Quality Teacher on KBS"), they're not responsible for the report nor do the comments suggest it's something they're interested in pursuing.
Posted by matt at 6:56 AM

Preaching to the choir here, I know, but if they're really interested in cleaning up the industry they'd pursue the poor, "unqualified"* Korean teachers with as much vigor. After all, not only do they commit more offenses, but there are far more of them. Not that I want to bring up the whole us versus them thing again, but it's just soooo easy to slip right back into it.

* I thought we'd finally seen the last of that term. Because the guy isn't actually "unqualified," he just sounds like he might be a bad guy.

Actually, the term used in the article, '자격 미달' (qualification deficient (?)) is different from the more common '무자격' (unqualified).

And yeah, it would be nice to see this kind of scrutiny towards teachers applied across the board.

If J was hitting kids, then he should be in court. If the director did not refer the case to the police, then he is aiding and abetting. IMHO.

Why has KBS not talked to J? Is the source for this entire story the hakwon director? Has KBS really talked with the Canadian teacher's association mentioned, or just taken the director's word for it?

Besides, being barred from a teacher's association might not show up on a criminal record check. If the matter was not referred to the police, or there was not enough evidence to prosecute...

I'm on the F-2 and would be willing to submit the checks, but it's certainly been nice not going through the process year after year.

My question is will ATEK use this as a springboard to go after F-4s? The government will continue to protect them and it would be too glaringly discriminatory to close the "loophole" on only the F2s. Won't happen.

If hitting students is the criteria to call someone "qualification deficient" it seem to be applicable to at least of the Korean public school teachers, from what I've seen. I've had at least one student tell me that if he has to choose between my homework and his math teacher's, he'll do the math homework, "because that teacher will hit me with a stick on the back of my leg."

(The same student recently moved with his family to America while his dad pursues a grad degree, and he emailed about how glad he is to be in a school where teachers are not allowed to hit the students.)

I think if I had kids in the public schools here and anything like that happened, I 'd certainly look into filing a civil suit of some kind.

Agreed. I think that the checks for public schools is becoming standard. It's not law, but some principals are a little tougher and what they say goes.

I have seen several posts on WorknPlay looking for F-series teachers with the checks. Then again, I worked for a public afternoon program a few months ago and they asked for it. I told them I didn't have one, but could get it. They never asked again.

Why would KBS interview 'J'? It might be harder to demonize him if he described things from his point of view! Seriously though, I'd like to do a study going through every story about English teachers over the past, say, five years and see just how many of those articles involve interviews with the teachers mentioned in the article. I'd imagine 5% would be too generous, and it'd be close to 0% if you didn't include dumb, single sentence 'quotes' like 'Oh, so we can get arrested for using marijuana!' or 'In my home country, our concept of hash is different from yours.'

Why aren't any of the small group of F-2 visa people who were so vocal in opposing criminal background making any comments here?

I'd like to know if, assuming the allegations are correct, they still stand behind their arguments against the criminal background checks for foreign spouses.

If F2 visa holders thought they'd always be immune to scrutiny, well, they clearly haven't been paying much attention to how these things go. Surprising, given F2s tend to be the ones who have lived longest in Korea.

This seems to be the same "J" mentioned in Choi Hui-seon's Chosun Ilbo article:

"43-year old native speaker instructor Mr. J, recently caught in Busan, sexually molested a student while teaching in his native Canada, and came to Korea after repeatedly getting in trouble with police for assaults and making threats, he said.

Currently teaching English at an organization in Busan, while he was working in a language hagwon he stabbed a child with a pin during a lesson, and was often absent from work, showing his insincerity regarding lessons."