A look at adoption stats

The Joongang Ilbo has an article (which may crash all but IE) about a Korean couple who adopted the child of Indonesian migrant workers in Daegu. It looks at the obstacles the parents had to face, as well as the discrimination their daughter has had to face due to her darker skin.

"When I walk with my daughter to a public bath or visit the supermarket, I hear people whisper 'She must be living with a Filipino,' or they stare at us with unpleasant looks," said Ha. The girl's father said people look at his family strangely when the three of them walk together. Only when he tells people that Ha-young was adopted will people nod as if they understand. "I never had any prejudice against foreign people whether they have dark or light skin," said Ha. "It really hurts when people look at us with such prejudice."

Lee is highly critical of Korea for its apparent inability to move on. "People talk about globalization but the truth is nothing has changed and Korea still relies heavily on homogeneous bloodlines," Lee said. "How can we advance and compete in the world with such backward prejudices?"

What's interesting about what is related above is that most people who experience such prejudice (and come to such conclusions about it) are part of a mixed-race marriage, which in Korea would also mean an 'international' marriage. The article mentions that instances of Koreans adopting children from other countries are not common (and are not tracked by the government), so it would be very rare to see two Korean parents with a child who looks different than them.

The article also looks the number of Korean children adopted every year:

According to World Partners Adoption Inc., a nonprofit organization, Korea ranked fourth in the world as of 2006 in sending children for international adoption with 1,376 children, behind China (6,493), Guatemala (4,135) and Russia (3,706). The Korean government, though, disputes the figure for Korea, putting it at 1,899.

However, the story is different now. According to the Ministry for Health, Welfare and Family Affairs, for the first time in Korea domestic adoption by families in Korea (1,388 children) has exceeded international adoptions (1,264).

It goes on to explain that a "fundamental shift in attitude" has taken place due to the example provided by celebrities who have adopted children, as well as "economics and [the] recent empowerment of women". Stirring stuff, to be sure. Perhaps the writer (or editor, if the graph was added later) should have looked a little more closely at the stats below: 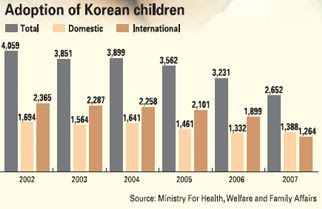 Between 2002 and 2007, adoptions of Korean children have fallen, with the number of international adoptions falling faster than the number of domestic adoptions. The story is not "different now" in that Koreans are adopting more - they're not. The story would appear to be that either less people are adopting children, or less parents are putting children up for adoption. I'd be curious to know which one it is.
Posted by matt at 2:50 AM

Re "The story would appear to be that either less people are adopting children, or less parents are putting children up for adoption."

This could be attributed to a combination of factors - the declining Korean birth rate, continued promotion of domestic adoption, an increase in abortions, and a slow trend toward acceptance of single parenting.

As a prospective (U.S.) adoptive parent, I was told by my agency that Korea had greatly tightened its adoption policies for international adoptions. Don't have anything to confirm/deny that, though.

Sex scandal teacher banned in Canada: School teacher Amy Gehring - involved in a sex scandal in the UK - has been banned from teaching in her native Canada for at least 10 years. Ms Gehring was found guilty of professional misconduct at the Ontario College of Teachers for her behaviour while working in Britain.

Vancouver Olympics get an ‘F’ for failing to curb sex trafficking: group: "In the U.S., customers must provide credit card information before responding to a post. However, that’s not the case in Canada, allowing a “virtual sex slave market to flourish outside the reach of police and intelligence services,” a release from the summit said."

Canada's White Nationalist Winter Olympics: "Canada is the new crucible for the development of a new tribe and family of people under the banner of white nationalism, and the Winter Olympics is a good mirror and standard to utilize. Where else will you find such friendliness, cleanliness and beautiful wide-open space topography like in our wonderful country? No other nation has a bigger backyard."