Those with blood on their hands, remembered and forgotten

[Update - the Korea Times tells us that in March Jang In-hwan was declared "Independence Fighter of the Month." It also tells us he "accidentally fired" at Stevens. Sure he did.]


In 1956, Korea's first president, Syngman Rhee, in a moment of modesty, had a statue of himself raised on Namsan. 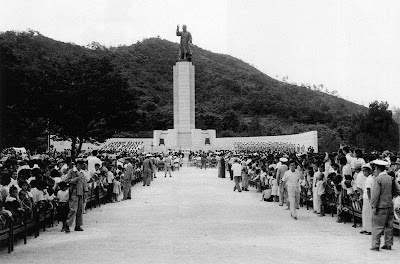 After students protesting his tampering in the 1960 election were shot and killed, Rhee was forced to resign on April 26, 1960. 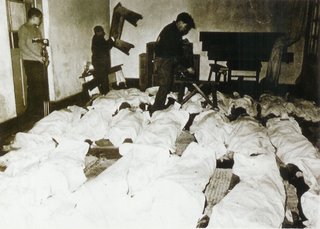 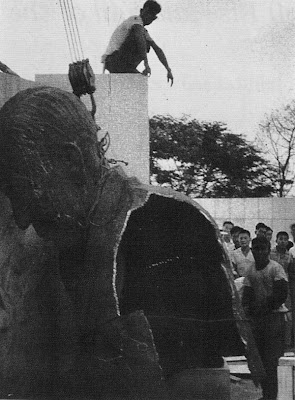 By the end of 1960, the remains of two statues were stored in a backyard in Seoul. 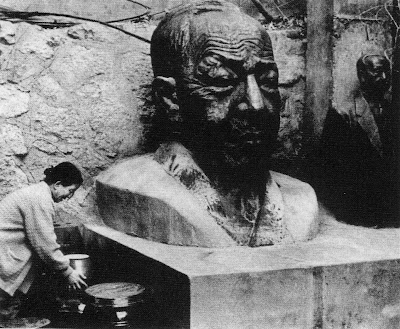 On March 27, the Chosun Ilbo found out what had become of the statues: 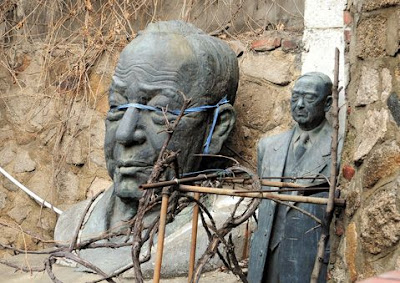 As this editorial describes it,

In a corner of a backyard in a private residence in Myeongryun-dong, Seoul, sit two statues of Korea’s first president Syngman Rhee, rusting away. The statues were erected in the late 1950s during Rhee’s term and were pulled down during the April 19 uprising. Only the head is left of the statue that once stood on Mt.Namsan and is covered in blue rope, while the other statue that used to stand in Tapgol Park downtown stands right next to it gathering dust. The only reason these statues are kept in the backyard after spending years at a junk yard is because one high-ranking union official in the Rhee administration saved them during the late 1960s. The official emigrated to another country and sold the house, including the statue.

I'm sure you can imagine how the Chosun feels about a statue of Korea's first president being left to rust. It doesn't make the sound point that GI Korea makes, that Rhee ought to be remembered for his efforts in Korea's independence movement, (some of which can be found here) and not for the autocrat he became once he gained power.

Interestingly enough, March 26 was the 133rd anniversary of Syngman Rhee's birth, but it was also on that day in 1910 that An Jung-geun was executed for killing Ito Hirobumi. As long as we're noting numbers, he had fired the fatal shots five months to the day earlier. Also worth noting is that Park Chung-hee was killed on October 26, 1979, 70 years to the day after Ito was killed. 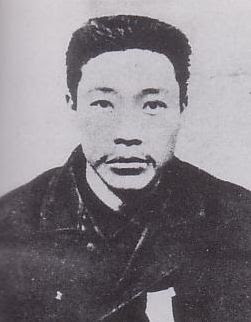 Ito Hirobumi
The Joongang Ilbo presented readers with this photo and caption describing the way in which An's death was commemorated:

A "Japanese diplomat"? While I realize it's the English language press, it seems a rather poor way to describe one of the founders of modern Japan and Japan's first prime minister. We're also told that "the Chinese government has promised “full cooperation” in the project to excavate Ahn’s remains from the site where the Lushun Prison, controlled by Japan, was located in the early 20th century." So whose bones are these exactly? They seem to belong to a man who shot and killed (let's use the word 'assassinate' instead of 'murder') a prominent former Japanese leader, and in doing so quite possibly hastened annexation. I'm not really sure this is a role model I'd want eight-year-olds singing hymns to. While I'm sure lots of nationalist heroes the world over have blood on their hands, it seems a further stretch to honor someone known only for assassinating someone.

I asked an Irish friend of mine if similar figures existed in Ireland, and he told me that Michael Collins is very popular, but in his estimation was often little more than a cold-blooded killer. The difference, however, is that Collins actually played a part in Irish independence, while An may well have played a part in speeding up the annexation process.

In remembering An, I can't help but remember two other patriots who I've written about before: Jeon Myeong-un and Jang In-hwan.


They, of course, killed Japan's American adviser in Korea, Durham Stevens, while he was visiting San Francisco in 1908. Oddly enough, the date he died was March 25. 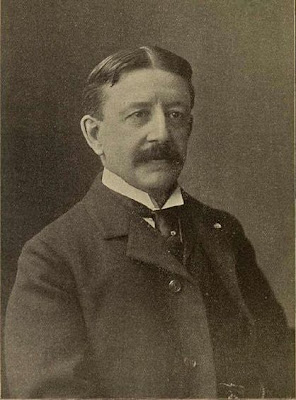 When I wrote my post on Stevens months ago, there was no Wikipedia article about him, but within a few weeks one had appeared, helped greatly by the appearance of a book at archive.org with biographical information and the photo above, taken in 1903. That article is now full of information about him (kudos to the person or people who put it together). The article provides links to pages I'd never seen before. I'd pointed out before that the local Korean People's Hall in San Francisco has these busts of Jeon Myeong-un and Jang In-hwan (Pic from here):

As this article makes clear, however, they are not only remembered in San Francisco.

In January 1909, Chang was sentenced to 25 years in San Quentin. Chang said to the judge through his interpreter that he “preferred martyrdom by death rather than by imprisonment.” He served 10 years and was released in 1919. He died in 1930 at age 55 and was buried in a San Francisco cemetery. On Aug. 3, 1975, Chang’s remains were flown to Seoul to be buried in the National Cemetery of Martyrs and Patriots.

And so, it is there, every year, that this ritual takes place: 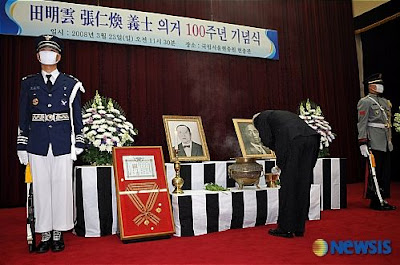 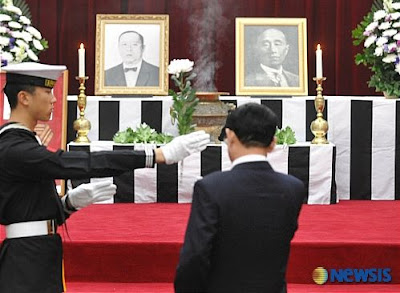 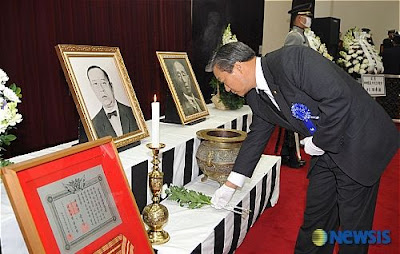 Of course, this year is the 100th anniversary. "Wait a minute," you're thinking. "It says above Jang died in 1930." That he did, but he and Jeon fired their fatal shots at Stevens on March 23, 1908. It's on that day that the two of them are memorialized. I wonder if they invited the U.S. ambassador.

I notice that there are no photos of those who these men killed at their memorials. I guess it's easier to believe that they were living up to abstract patriotic ideals when photos of their actual victims are not present. That's why, of course, Rhee has been vilified by many people - one need only visit the 4-19 cemetery in northern Seoul to see those who died under his orders on that day in 1960: 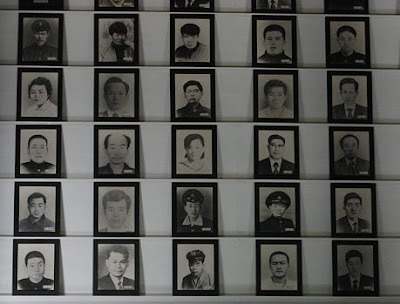 Because such photos are lacking in the memorials seen above, there is no reflection on the effect of the shots being fired, which might lead to empathy. There is only a celebration of the fact that shots - any shots! - were fired, with little thought as to what the consequences of those shots were. If you were to insert a photo of Ito behind that children's choir and they looked as they were being made to cheer his death, I'm sure they'd look slightly psychotic - to outsiders, at least. As long as there is no reflection on what happened after the shots were fired, it seems likely a group of assassins who did nothing to bring independence closer (and may have even hastened annexation) will continue to be held up as pinnacles of patriotism. Ironically, the one person whose efforts may have helped Korea's position as its fate was being considered towards the end of World War II now has his statues rusting in a backyard in Myeongryun-dong.
Posted by matt at 2:35 AM

What happened in Finland on June 16, 1904 was quite similar to An's deed : the Russian Governor General to Finland Nikolai Bobrikov was assassinated by Eugen Schauman, a clerk in the then Finnish Senate. (An interested factoid is that after being wounded Bobrikov refused to go to the Russian military hospital and insisted to be treated by Finnish doctors. He died the next day after the assassination.)

Bobrikov was indeed a detested Governor-General and his passing was not mourned, but at the present moment An and Schauman are quite different historical figures indeed. It is said that back then he became a cult figure, but on the centenary of the assassination the Finnish Government declined to commemorate the thing in any way. (I remember there was a small exhibition in the National Archive, but that was pretty much all there was.)

This makes a nice comparison in the history and use of history between the two countries. In one of them it is possible to talk about "distortion" of history, and of history gone wrong, with celebration of assassins of representatives of an imperial power; and the other where the history and its interpretations have made the killer of a Governor-General a mere historical figure (although a special one), of which the present Prime Minister could say the following:
- "By today's standard's it was purely an act of political terrorism, and altogether deplorable"
- At the time some felt that it was a heroic act, which it was not. The same kind of thing can be seen right now around the world. People celebrating murder."
- "A year ago in the summer I paid attention to the plaque as I was climbing the stairs of the Council of State building. I realised that it would soon be the 100th anniversary. I announced that it would not be commemorated."

I have been using An Jung-geun and Eugen Schauman as very good examples to illustrate differences in the uses of history.

Here's an English translation of an article from 2004:
• Finland shaken 100 years ago by murder of Governor-General Bobrikov. Prime Minister Vanhanen sees nothing to celebrate in Eugen Schauman's actions