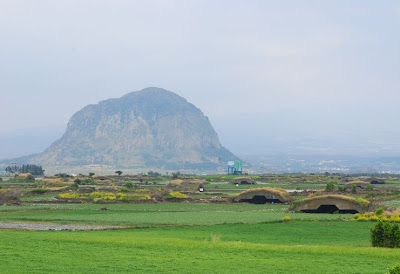 Photos can be found here.
The Joongang Ilbo has an interesting article (which may crash Firefox) about the Alddeureu Airfield (알뜨르 비행장) built on Jeju Island in the 1930s by the Japanese military.

Half a century has passed and now Alddreu is a vast potato field, unrecognizable as the military installation that the Japanese built in the late 1930s during the colonial period. 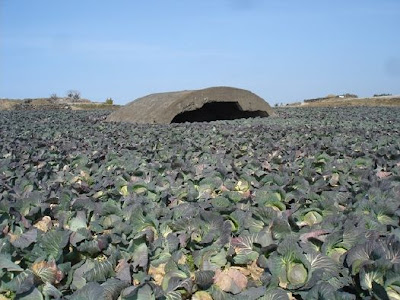 The Cultural Heritage Administration designated the airfield a heritage site last year as part of a broader effort to preserve sites in the country linked to its modern history and the Japanese colonial era. Seogwipo City is planning to develop the area into a major theme park, which will include a museum. The main construction is scheduled to start in 2009 and last through 2015. 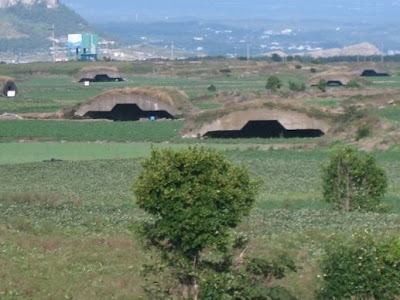 The airfield served as a transoceanic bombing base during the war between China and Japan in 1937. The planes ran bombing missions over Shanghai, Nanjing and other cities in the East Asian theater. The strip was expanded until 1943 when 19 hangars dotted the landscape. At its height, 2,500 Japanese soldiers and numerous fighter planes were based here. [...] 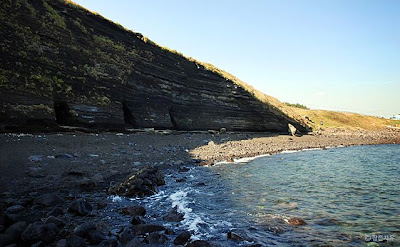 Photo from here (where more can be found).

Located on the Songak seashore, facing southwest, there are 16 caves cut into the grey cliffs. These were launching bases for special mini submarines designed to sink larger ships on what were essentially suicide missions.

Scholars say that right before the capitulation of Japan in August 1945, more than 70,000 Japanese soldiers gathered on Jeju Island in anticipation of a final showdown with Allied forces. The Japanese military command thought the Allies would start their final push to Japan from Jeju. The island's estimated population at the time was 220,000, underlining the strategic importance Japan had put on Jeju at the time.

The first three abstracts on this page mention the forced labor that was used to build the military installations on Jeju Island and the buildup of troops there. I'd had no idea there were 75000 Japanese troops on the island.

This article from June of 2006 mentions that the airfield was going to be registered as a cultural property. It includes this photo of the airfield: 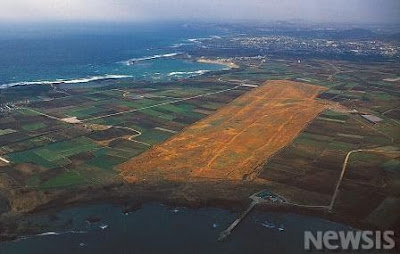 Interestingly enough, if you look in the center of the circle marked as "Alddeureu" below, you can just make out a lighter-colored smudge, which represents what we see above. The caves are also within that circle. 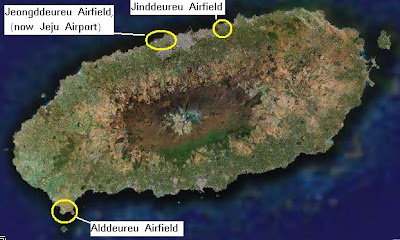 Also marked above are the Jeongddeureu (정뜨르) airfield, which became Jeju Airport, and Jinddeureu (진뜨르) airfield, which, according to a comment left by long term resident Fred Dustin, is now a melon patch east of Jeju City, with the road occupying the former runway. Needless to say, if he hadn't described where it was, I would have been clueless as to its location. 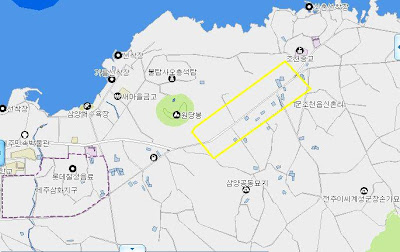 (The approximate location is outlined in Yellow)
With three airfields and 70,000 troops present, the fate of Jeju Island had the war continued is pondered in the article:

The Alddreu airfield and caves for the submarines are a reminder that the people living on Jeju at that time could have been caught in a bloody and prolonged battle in 1945. Arguably, had it not been for the atomic bombs that prompted Japan's surrender, Jeju could have been another Iwo Jima.

I would imagine Okinawa would be a better comparison. Though it escaped a bloodbath in 1945, Jeju would not escape that decade unscathed. This year is the 60th anniversary of the Jeju Uprising.
Posted by matt at 1:25 AM

Matt: Also, on the `circular' highway starting at just beyond today's `삼양검문소 east of Cheju City and stretching in a straight-line easterly to just before the point the main road forks at 신촌 are the unrecognizable colonial remains of another Japanese airport on Cheju known as chindduru (진뜨르), dismantled by 1948 to create the melon fields now seen on either side. The road now occupies the runway of that day.