As it turns out I was wrong below about the photo from Dongdaemun not facing into the city. It is indeed facing into the city and the grove of trees at right is Jongmyo (in larger photos its wall is visible). Many thanks to a reader for pointing this out.

The two photos below were used in this post, where they were identified as being taken from Namdaemun. That is incorrect. I noticed in the background in the video mentioned here that the first picture below was shown with a caption indicating that it was taken from Dongdaemun looking into the city. Looking into it, I've found that that isn't exactly correct. 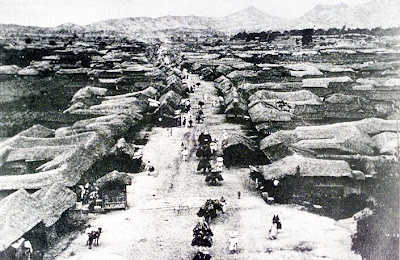 The first photo is perhaps from the 1880s. The date of the one below is more difficult to ascertain. I believe the tram was double-tracked out to Cheongryangni in 1911, and that the road was widened before 1920, neither of which help much in dating it. 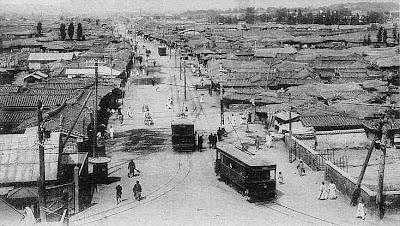 Here are the photos I've found in roughly chronological order. 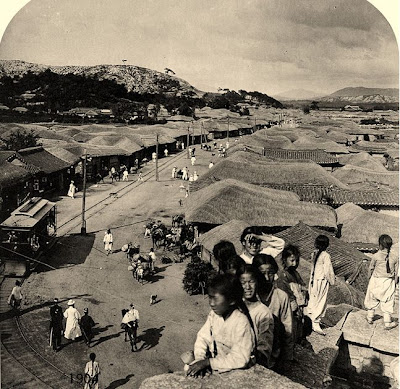 The above photo is from Korea Through Australian Eyes, which features photos taken by George Rose in 1904 (during the Russo-Japanese War). Note the Japanese police/soldiers taking a Korean away. Dongmyo is visible at top right. 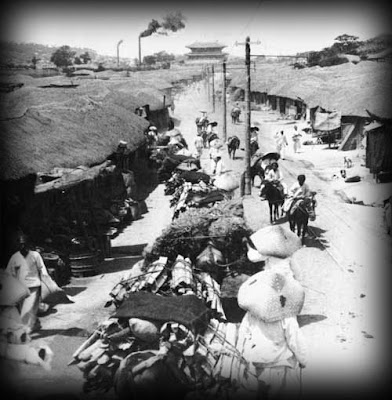 Note how the street curves off in the distance in the first photo. Note the similar curve in the photo above, and the smokestacks next to the gate. 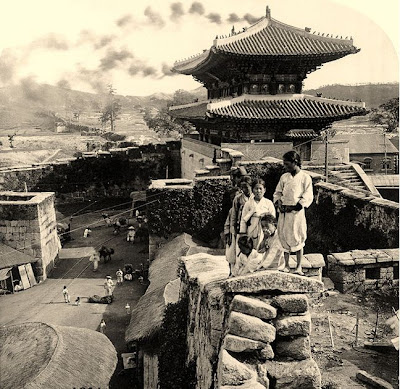 The photo above is another George Rose photograph, which is clearly of Dongdaemun, and has the same smokestacks in the background. It's pretty obvious, then, that the first photo, and the one below, taken at a later date, are both taken from Dongdaemun, which still works for the argument I made in that post, as it's still looking outside the city and is nowhere near where the well-to-do lived.

Also mentioned in my older post was Murayama Chijun, and the photos he took. This paper notes that he was a graduate of the Tokyo University Department of Sociology, and "published
several excellent research reports on the condition of the Korean people by commission
of the Government General of Korea." To help date his photos, it mentions that Murayama had done fieldwork in 1930. Another article mentions him working between 1929 and 1937.


Oh, and here's some vintage Japanese propaganda, another book to be found scanned here, titled
'Administrative reforms in Korea; articles reprinted from the "Seoul Press."' The articles are from November of 1919, just after Baron Saito arrived to present a kinder and gentler form of colonialism to Koreans. To give you a taste of what you're in for if you choose to read it, it begins with a review of one of its earlier publications:

The Korean Independence Agitation (Seoul Press Chosen) is the title of an interesting booklet which has come to hand. Its contents are made up of a series of articles which originally appeared in the Seoul Press. The articles are particularly interesting, as throwing a somewhat new light upon the alleged stories of atrocities committed towards those Koreans who took part in the disturbances. The view is advanced that it is unjust to think that the excesses committed by the police and others in suppressing the outbreak had the approval of the higher Japanese authorities. Emphasis is also given to the fact that many of the stories of atrocities committed by
the Japanese were very much exaggerated by people with a strong anti-Japanese bias, and that the brutality was not always on one side. There is of course a natural tendency among many people to sympathise with the weak against the strong, but this inclination ought not to influence our sense of justice. The booklet performs a useful purpose by supplying what appears to be a perfectly impartial rendering of events which in the past have no doubt been distorted by prejudice and passion.

These old photos are so fascinating.