A Canadian has made the (entertainment) news in Korea. Why? Because when she was back in Canada, she had a soju party with 5 other people and they drank 22 bottles of soju. Best to focus on this news item, as I'm sure there aren't any other stories with the number 22 in them these days. 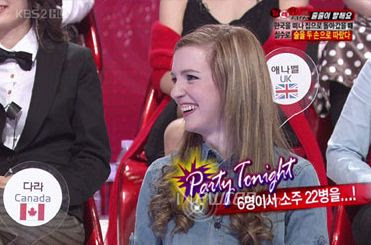 This story was told by Dara, a Canadian participant on Misuda. I'm left wondering whether the ability to drink 4 bottles of soju creates a good impression or a bad impression. Okay, I'm not really wondering that at all. 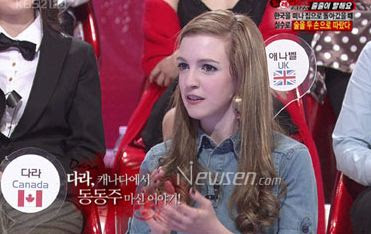 The caption above reads "Dara's tale of drinking dongdongju in Canada!" Are viewers supposed to think,"Wow, foreigners drink our traditional alcohol in their home countries?" Do these viewers really need to have Korea's existence affirmed like this? I really don't think KBS does its viewers any favors by pandering to a desire for benign foreign attention, but then, since it likely helped play a part in creating this desire over the decades, such pandering isn't going to disappear anytime soon.

By the way, a worthwhile post on Misuda is here.
Posted by matt at 3:06 AM

I'm amazed that they haven't gotten around to the dongdongju yet. The longer this show goes on the more baffled I am. I know what Koreans want to hear from foreigners (I can/can't eat fish/spicy food, Ajummas are tough but noble, Korean office workers work hard) and I also know that it generally takes a week of knowing someone Korean who's new to foreigners before you've used up all your Korean-impressing anecdotes. That they've been going strong this long with still more tales to tell is a true testament to the Sungnyemoon spirit over there in the KBS writing room.