Last week Brian in Jeollanam-do drew attention to the "shameful scene" of Japanese tourists posing for photos in front of the ruins of Namdaemun. There is a remote chance that they were thinking,"We are certainly not gleeful to see that a monument Kato Kiyomasa restrained himself from destroying has now fallen due to the inability of those in power here to preserve their own history." To be sure, this photo, and others like them that were publicized in the Korean media, became the most-viewed story on Cyworld News. 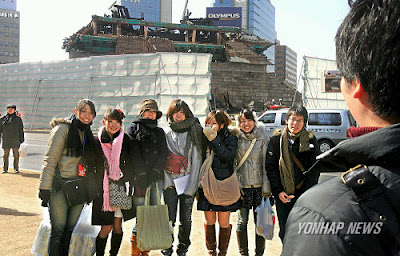 On an unrelated note, it's nice to see that, two prime ministers later, this website is still operating. I couldn't help but be reminded of yet another similar scene I witnessed almost three years ago: Here's a shot of three after the photo above was taken, revealing the location: 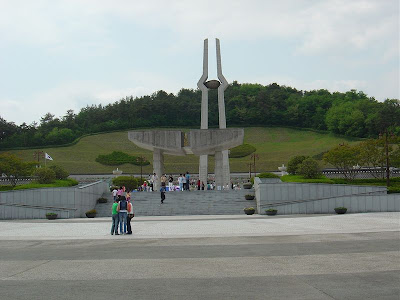 For those who don't recognize it, this is the Kwangju Uprising National Cemetery. These middle school girls were posing for a photo in front of a cemetery where hundreds of those killed or wounded at a time when Korean soldiers opened fire on unarmed civilians are buried. Though they are not Japanese, and are indeed Korean, I'm sure that the netizens who criticized the Japanese tourists seen above will be very interested in these photos, as the girls seen here show a similar cavalier attitude posing in front of a symbol of national tragedy, one where people - in large numbers - actually died. If anyone with a naver or daum blog would like to post these photos there, feel free, but please do leave a link to this post. I'm certain that those who posted comments criticizing the Japanese tourists above were not motivated at all by hatred of Japan, and would apply the same rationale to these girls. If you do choose to post my photos on a Korean portal, do let me know, so I can prepare myself for the deluge of nasty comments directed at these girls.
Posted by matt at 4:04 AM

Hm. I'm not sure how I'd feel about people taking photos in front of 9/11 site. I do think I'd have a different visceral reaction than if I'd seen people posing for pictures in front of, say, the Vietnam Memorial.
You may argue that no one died at Namdaemun (whereas the attack on the WTC towers certainly had a horrific human toll), but I think it's a bit disingenuous to compare the two circumstances you've chosen to compare. One is a memorial, and the other is rubble of a national symbol. One's designed to have people visit it while the other is like visiting a car wreck.
I can agree with the sentiment that Korea and Japan should bury their enmities. Furthermore, l have no doubt that there is a disparity between the public reaction between images of countrymen and foreigners being "disrespectful." I do have a problem with the seeming tone of the entry that seem to paint this as a unique phenomenon among Koreans and Korean websites. Maybe that's not your intention but that's how it comes off. I think you'd agree that this happens basically everywhere, and in this particular entry I think the argument is imprecise.
I've been a reader for a little while now, and I think that many of your criticisms of Korean culture has merit. I get the sense that you're not just looking at things from the perspective of an "outsider" American living in Korea but rather as someone who'd like to see things improve within a culture you've more or less decided to live with. I share this, despite being a Korean living in America (whose culture I've basically embraced). Still, I notice that the last few posts have been somewhat... strong (which I believe you noted yourself). I just felt the need to comment to let you know that not all of your critics are foam-at-the-mouth nationalists. Sometimes they're people that basically share the same ideas that think that it should be dialed back a little bit.

The qualitative differences between the various sites make them hard to compare, however visitors to them behave. Moreover, Namdaemun, the Kwangju memorial, Hiroshima and many of the others you mentioned are places whose meaning isn't very controversial. Anyone can see that they are the sites of tragic events, large or small, and even outsiders are able to understand this (though they may need some prompting). I mean, even someone who'd never heard of Namdaemun before would be able to understand why Koreans would be upset that it burned. The obvious exception is the 9/11 site - any decent person would consider this the place of a great victory, and nothing else. It shouldn't be included in your list.

To the first commenter -

Yes, the ending was a bit too strong, likely because I had come upon this article again a short while before, which didn't leave me feeling very generous towards these kind of netizens (who can be found anywhere, of course - how many English-language comment sections or bulletin boards are actually worth your time?).

Actually, the reason I took the photos of the girls posing at the Kwangju cememtery was that I thought it was pretty strange to see them posing like that. Part of this was due to my having some strong feelings about the Kwangju Uprising (I must have written about 20 posts about it here by now) and part of it was because it's not as common in North America to insert yourself into photos of landscapes and buildings as it seems to be in East Asia. When Korean friends look at my photos, they often wonder where the photos of me are.

I think most people would be fine with a photographer taking photos of something like Namdaemun by itself, but why is it that posing and putting yourself in the photo carries a different connotation? If those Japanese students had not been smiling, and had been looking serious, would that have been alright? At what point do we draw the line and decide a certain kind of photo is okay, but a photo with a person posing in the frame is not okay? I'm sure there are reasons why we differentiate between the two, but I don't know what they are.