Back In September a post was written at the Oxford English Dictionary's website titled "The OED gets a K-update," one which gives some history of the word 'Korea' in the English language and lists the 26 words of Korean origin newly-added to the OED.

One word is "Konglish, n. and adj.", which as the OED dates as a noun to 1970 and as an adjective to 1975. Another word is "fighting, int.", which the OED dates to the 2000s. As the dates in this article I wrote awhile back reveal, these dates are incorrect. "Konglish" may have first appeared in English in 1967, but in Korean its likely first appearance in was in two articles in the Kyonghyang Shinmun in July 1962 (here and here, where it is cutely defined as "코리언(韓語)과 잉글리쉬(英語)의 비빔밥이란 말이죠" - "a bibimbap of Korean and English").

As for the first appearance of "fighting," it predates the OED's guess by at least 30 years (and perhaps quite a bit longer, if we look at these results). The first mention in English of 'fighting' that I found was in this October 21, 1975 Korea Times article, and recently I found this article in the February 27, 1972 issue of 주간여성 (Weekly Woman), about a young woman aiming to be a pilot: 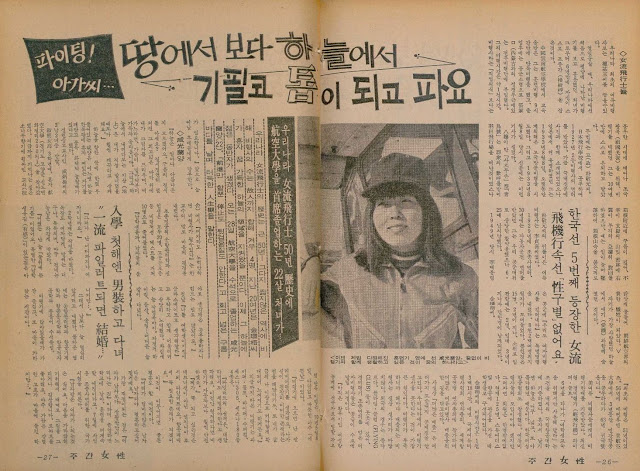 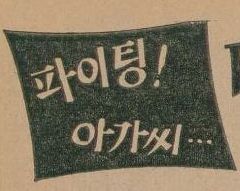 And just for fun, the cover. 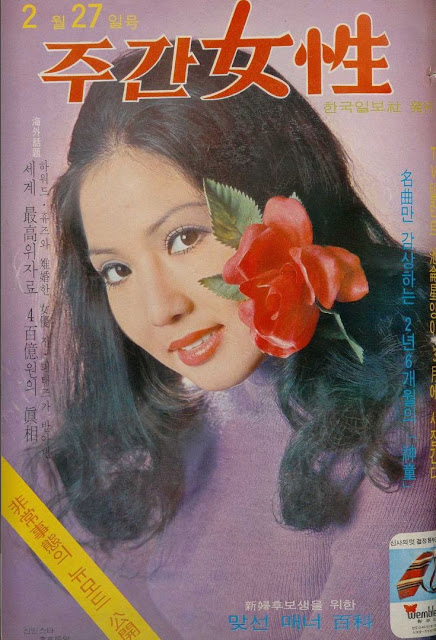 I would tend to think the operative 'first appearance' of the words in these cases should be the versions in Hangeul, since they are English-derived words (or combinations of words) to begin with.

(And yes, I did suggest these edits to the OED shortly after these new additions were made public; perhaps corrections will be made at some point.)

I've long contended there are at least two types of Konglish, one being more "old country" in nature, the other being more "gyopo style."

Old-country Konglish is peninsular; it's the Konglish in which English words are twisted and misused ("eye-shopping," saying "hip" for "buttock") or plausibly English-sounding words are created ("skinship"). Gyopo Konglish, such as what my mother spoke to her fellow-gyopo Korean friends while living in the States, is simply a mixture of Korean and English (a bit like the linguistics concept of code switching, but happening between the same two conversation partners in the same conversation). Example: Mom saying to a friend, "그 사람이 진짜 나쁜 사람이야, I know, I know..." I grew up hearing gyopo Konglish all the time. It was a quirk of the Korean-American diaspora and was, I think, largely linguistically isolated from old-country Konglish: I never once heard Mom use terms like "eye-shopping" and "skinship."

With respect, it's the Oxford *English* Dictionary, which surely records words used *in English*.

Thanks for sharing that first-hand perspective on the difference between the two Konglishes. One other thing about Konglish is that a number of such terms were actually developed by the Japanese (one I remember is steering wheel, which derived from 'handle' in Japanese (ハンドル Handoru) and became 핸들 in Korean, though 스티어링 휠 is common enough now as well). As for 'eye-shopping,' I enjoy teaching kids 'window shopping' and showing a show window full of eyeballs...

To the second commenter,

There's enough borrowed vocabulary to make the inclusion of many of the Korean-derived words viable (though 'fighting!' is an odd inclusion, to be sure). As this fascinating article I read today (explaining the historical and technological reasons for English spelling being so inconsistent) put it, English ‘pursued other languages down alleyways to beat them unconscious and rifle their pockets for new vocabulary’.

Of course it's a question of what criteria they set for dating the origin of a word, in English (e.g., Latin origin words are also only given origin-periods when they become observed in English, not in other languages, nor in Latin itself).

I presume the task of word-origin-setters is a lot like that of the genealogist in tracing a family tree, which not about finding any occurrence of the same surname in the region of interest, but instances of the surname which either definitely or likely continue to the present. There is therefore not necessarily a correct answer.

Two other ideas of "FIGHTING!" etymology

(1) Contra the OED's etymology that FIGHTING! is "probably short for phrases such as 'we are fighting,' 'keep fighting'..."

If we take the 1972 magazine article as an ancestor-form of 21st-century FIGHTING! (not necessarily the same word as-used-now), we might get a different etymological explanation.

Thematic clues suggest to me that 1972 "Fighting" appearance may be lifted from the US military, either by one or two steps, or from a military-adjacent subculture, but in either case introduced to the Korean language via US soldiers and KATUSAs.

"The Fighting Agassi" as used there seems like an appropriation and reapplication of the name of any number of military units ("The Fighting First Division") or the jocular nickname for a commander ("Joseph 'Fighting Joe' Hooker") or a boxer ("The Fighting Frenchman"). Though of course Korean lacks a definite article ("The Fighting Agassi"), this is one reasonable reading of the boxed slogan, I think, especially in the context of the article.

Calling someone "Fighting Joe" adds very little value (kind of like my use of "very" there just now), but sounds kind of cool and adds a mystique of toughness. Some Koreans could pick up on this and reuse it. But of course it wouldn't fit for a flower-arranger or a tea set designer. Becoming a pilot, though, seems something thematically quite related to the military or at least was a male-dominated 'macho' fields (and, fifty years later, it retains this feel or reputation, much talk to the contrary recently notwithstanding).

This particular field, piloting aircraft, could plausibly-enough earn the woman in question the military-esque semi-joking nickname of "Fighting Agassi." It's not a one-to-one with what a North American would have nicknamed such a woman but it *is* a word/phrasing/concept that made a language jump, after all.

If my theory is right, the 1972 mag article is not unambiguously the same as the plain-interjection "Fighting!" (="Go For It!" as the OED link has for the word) as we would now recognize it, and much closer to the established use of "Fighting (Name of Group or Person)" nicknaming convention. This would put the phrase's evolution in Korean in the 1960s-70s-80s?-90s? period.

The 1975 Korea Times article specifies FIGHTING's use exclusively with sports as a cheer, which also doesn't seem to me to be the 21st-century-regonizable FIGHTING! we know (too narrow. even if clearly related and still retaining that use). At the same time, any number of high schools or colleges in the USA/elsewhere had the same kinds of slogans in their team songs and cheers at games (I mean, the genre of such songs is literally called the "Fight Song"!).
.

(2) I'd suggest the way the confusing interjection FIGHTING! came into English-speaking consciousness must be through subtitles in Korean dramas.

Specifically, in cases when amateur Internet translators kept the Korean "FIGHTING!" as English "Fighting!" Good translators would probably have smoothed it over with some other non-confusing translation, but a lot of subtitlers were just enthusiastic amateurs spreading their work for free, and so it went.

If this theory is right, it definitely points to a 2000s-era crossover. There was not much of an Internet-video-sharing or amateur-subtitling culture before the 2000s.