My attention was directed the other day to this video, "To Mr. Leynse," a "tribute to American filmmaker Humphrey Leynse's work with USIS-Korea, produced by his colleagues there circa 1966 (Liberty Production, directed by Chun Sun Myung). During his career with USIS, Leynse produced over 50 films, and served as head of USIS-Korea." (There are two interesting comments at Youtube; the film is also posted at Archive.org where it can be downloaded.)

I was told that James Wade was a good friend of his, and that he had borrowed the film "Out There, A Lone Island" and showed it one night at an RAS lecture. I decided to look at the RAS Transactions all stored here (the "Report of RASKB activities" for each year lists all the lectures) and found the presentation, Films by Humphrey Leynse: “The Legacy” and “Out There: A Lone Island”, which took place June 21, 1978. (I could help but notice that on September 6 that year, James Wade also gave a presentation titled "Jack London in Korea" - considering my interest in the topic, I'm curious about that lecture.)

Leynse first came to Korea to work for USIS in January 1960 and left that job in 1966, and then, I was told, "took his wife and year old son - and James said a refrigerator - and went off to live on Ulleung-do for 2-3 years." Archive.org mentions that "After leaving USIS in 1966, he started Oceania Productions, an independent film production company, and in 1970 he joined the faculty at Washington State University, where he taught until his death in 1977." 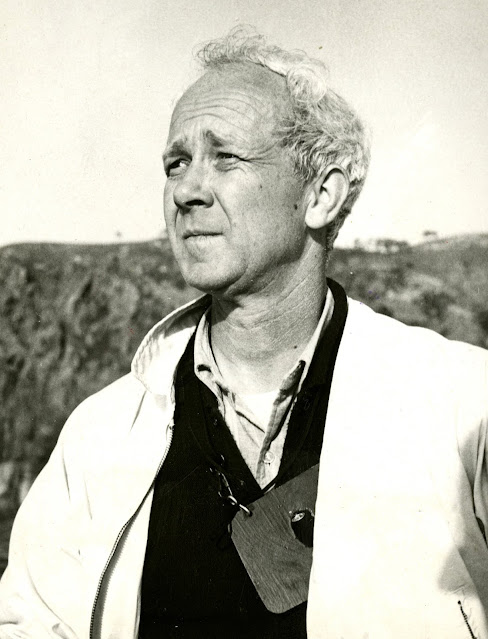 Humphrey Leynse during filming of “Out There, A Lone Island.”
That article also mentions some Korea Times articles he wrote. Here's one from 1964 about his first trip to Ulleungdo (click to enlarge):

A Korean doctor he mentions. Timothy Yilsun Rhee, wrote an article about Ulleungdo a month later: 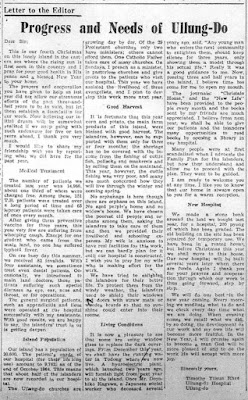 Interestingly, in January 1964, the government announced tentative plans to lift the 12am - 4am curfew nationwide, starting with test runs in Ulleungdo and Chungcheongbuk-do. I know Chungcheongbuk-do had no curfew in the 1970s, so it seems it stuck there, though I have no idea about Ulleungdo. The rest of the country had a curfew until 1982. 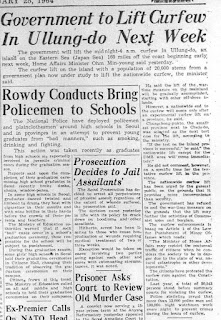 The article also references a 1968 KT article, but I haven't been able to find it yet.

WSU's archives contain his papers, and this webpage about them also contains a short biography:

Humphrey W. Leynse was born on June 22, 1921 in Peking, China. His parents, Reverend James and Anna Groenendyk Leynse, were Dutch Reformed Church Missionaries at the Presbyterian Mission in Peking. As a child, Leynse attended the Peking American School, where he first learned to speak English; previously he spoke only Dutch and Mandarin Chinese, and he remained fluent in these languages throughout his life. He also studied French and Indonesian.

Peking was Leynse's home until age twenty, when he came to the United States to study at Pomona College in Pomona, California. World War II interrupted his education. He served in the U.S. Army and from 1943 to 1945 as a special agent in the Counter Intelligence Corps (CIC) in the Philippines and New Guinea. His duties included teaching the Chinese language, formulating an English-Indonesian dictionary, and engaging in combat duty as an Agent Investigator. During his time as an Agent Investigator then Sergeant Leynse investigated foreign political groups in the Manila area and helped to establish an informant network. The Army awarded him the Bronze Star in 1945.

At the end of the war, Leynse returned to Pomona to complete his studies for a bachelor's degree in liberal arts. From 1949 through 1951 Leynse served as an educational advisor for the United States Department of the Army and as superintendent of an Educational Center in Karlsruhle, Germany. In 1951, Leynse returned to the Pacific (the Marshall Islands) as an administrator of the Department of the Interior. From1954 to 1957 he again worked for the State Department, investigating those Chinese visa applicants in Hong Kong who sought to emigrate to the United States under the Refugee Relief Act.

Leynse's career in filmmaking began in 1957 as a Motion Picture Officer for the United States Information Service (USIS), first in Djakarta, Indonesia, and later in Seoul, Korea. He made more than fifty documentary films with USIS. It was during his time in Seoul that he met and married Judith L. Light, a journalist who was assigned to Seoul as a Motion Picture Officer.

Despite his successful career with USIS, Leynse tired of governmental bureaucracy and desired to produce his own full-length feature film. In 1966 he resigned his Foreign Service position and began the odyssey that led him, with Judith and their baby son, to the remote island of Ullung-Do, Korea, some 180 miles east of the mainland in the Sea of Japan. For two years he recorded the harsh life of the fishermen and their families on Ullung-Do. His film, Out There, a Lone Island, won Leynse several awards and was featured in various New York venues, including the Whitney Museum of American Art, the Museum of Modern Art, the American Film Festival, and the Ethnological Film Festival at the Museum of Natural History. Leynse made this film and many others under the auspices of Oceania Productions, a company he created in 1951 to produce educational and theatrical films concerning the Far East.

In 1970 Leynse came to Washington State University as an Assistant Professor of Communications. He was promoted to Associate Professor in 1975. Throughout his tenure at Washington State Leynse played an important part developing cinema instruction as part of the Washington State University's mass media curriculum. In addition to his classes on film criticism, scripting, and documentary film, he taught the very popular "Masters of Cinema" course, which grew from an enrollment of thirty-seven students in the fall of 1970 to seven hundred in the spring of 1977. His film experience was also combined with his Asian interests in a course on Asian society as revealed through Asian films. Leynse also helped to produce one of the area's most popular radio programs, "Moviegoers," which was written by students in his film criticism classes.

Leynse became ill in April of 1977. Despite this he was able to complete teaching all of his classes and missed only two weeks of the semester; when at one point he dropped in on one of his classes to see how things were going, he was given a spontaneous standing ovation by the students. Following surgery for a brain tumor, Leynse died on August 20, 1977, at the age of fifty-six.

A review of "Out There, a Lone Island" from 1972 can be found here. Researchers on Ulleungdo discovered the film and had it screened with members of Leynse's family in 2012, and it seems copyright for the film was turned over to Ulleung County by Leynse's son James in 2014, when restoration work was to begin on it.

Among the items in the collection of his materials at WSU is a "Green cloth bound volume of Humphrey Leynse's handwritten account of travels for and film production of 'Out There, a lone island"' and "incoming correspondence to the Leynse family at Ulleung-do, Korea," which sound like they could make for interesting reading.

Thank you for the article