Debates over translation of Korean literature in the 1960s

For my latest Korea Times article, I looked at the development of Korean literature in translation in the 1960s, contemporary debates about literary translation, and how the South Korean government was prompted to support translation efforts after a Japanese author won the Nobel Prize for literature in 1968. Richard Rutt, Peter Lee, Marshal Pihl, and Fred Dustin all make appearances (Richard Rutt was the go-to person for the Korea Times when translation of Korean literature was examined). I had gathered together a large collection of KT articles about translation but only made it through a third of them before I was well over my word limit, so perhaps there will be a sequel at some point.

Below are some of the Korea Times articles I used. This one, by Richard Rutt about James Gales' translation of Kim Man-jung's Cloud Dream of the Nine, is from November 11, 1968. 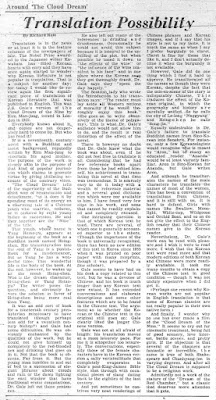 Two articles from January 1, 1969, by Richard Rutt and Kim Song-hyeon, with Rutt's article continued below. 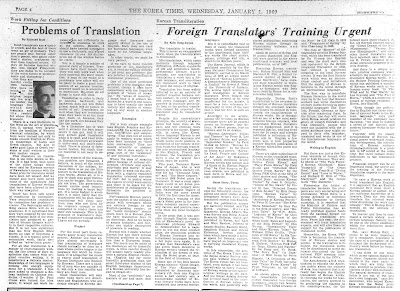 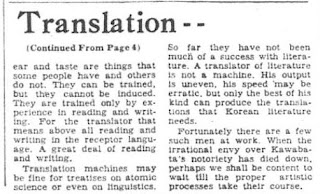 This April 20, 1969 article is about the Korea PEN Clubs translation efforts, and mentions government support of translation. 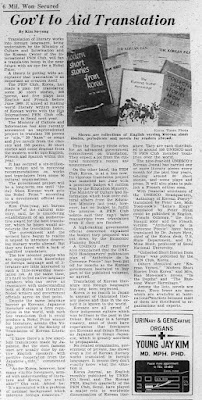 This May 8, 1969 article features Peter Lee, who went on, I've found out from friends, to teach at UCLA for many years.

This February 1, 1970 article about a round table discussion on translation hosted by the Royal Asiatic Society features Song Yo-in, Marshall Pihl, Kim Chin-man, and Chu Yo-sup.

I enjoyed your Korea Times article, having recently read "Trees on a Slope" by Hwang Sun-won and loving it. I would like to find more Korean literature translated well into English. Any recommendations?

Tough question, since there's so much out there now, most of which I haven't read. Of what I have read my likely favourite is A Distant and Beautiful Place, by Yang Guija (1987) [Translation published 2002]. While it is set in Bucheon, where I used to live, it's also just beautifully written. A somewhat similar book from the late 1970s (similar in that they’re both collections of linked short stories) is The Dwarfby Cho Se-hui (1978) [2006], though, having read a chapter of it in Korean (for a translation class) I think it's difficult to translate in a way that captures its unique style in Korean. For older books, Yom Sang-seop's Three Generations (1931) [2005], is another I enjoyed (I made a 'walking tour' of its locations on the blog years ago), as is On the Eve of the Uprising and Other Stories from Colonial Korea [2010] which has Park Tae-won’s James Joyce-influenced story ‘A day in the life of Kubo the author’ and Yi Tae-jun’s ‘Before and After Liberation.’ (Park’s grandson is Bong Joon-ho). For more modern books, Han Kang's Human Acts, about the Gwangju Uprising, is quite good. Hyun Ki-young's Sun-i Samchon (late 1970s) is also an interesting novella – if you’re in Korea you might be able to find it cheaper at Kyobo or via the Royal Asiatic Society. It deals with the fallout of the trauma from the Jeju Uprising, and when it was published in the 1970s the author suffered greatly at the hands of the government.For online translations, check out Brother Anthony's page - he has lots of great short stories / novellas that he translated himself hosted at his website here.